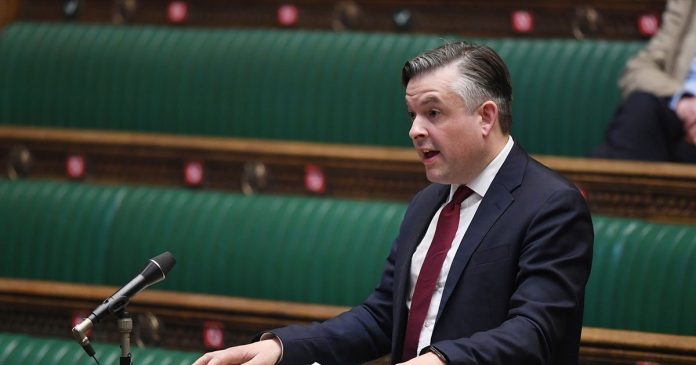 The renewal of the Coronavirus Act was allowed to pass without a formal division as Labour offered no opposition to the bill.

“We do not oppose the renewal of the Act,” Jonathan Ashworth confirmed on behalf of Labour. “The main reason we will not oppose this Act is that it statutory sick pay on day one, not day four, as used to be the case before this Act received royal assent.”

But he added: “I do urge ministers to find a better way for this Act to be scrutinised.” He reminded MPs that Labour asked for a regular renewal of the Coronavirus Act and for different aspects of the Act to be able to be expired.

Ashworth told MPs: “To be frank, perhaps I am naive, I did not anticipate that 18 months later this Act would continue to be renewed on the basis of a 90-minute debate, not allowing Members to scrutinise it properly.”

The Shadow Health Secretary took interventions from Tory MPs, who criticised Labour for not voting down the Coronavirus Act today and for voting with the government or abstaining on key votes throughout the pandemic.

To these criticisms, Ashworth reiterated: “I’m afraid I do not have the confidence in this particular Treasury, who are keen to find savings in the public finances, that they will continue with paying statutory sick pay from day one.”

The Labour frontbencher welcomed some of the restrictions being removed from the Coronavirus Act, but also criticised the government for removing powers from the Act that had enabled local authorities to meet remotely.

Earlier in the day, Ashworth told Javid: “Surely he must be concerned that yesterday we recorded close to 50,000 infections. On every single day of the last three weeks, 10,000 children have been diagnosed with Covid.

“The booster programme is stalling, with charities describing it as a chaotic failure. Only around 13% of children have actually been vaccinated. His wall of defence is falling down at just the point that vaccination is waning.”

Labour’s Dawn Butler, David Davis on the Tory benches and Liberal Democrat Munira Wilson this afternoon highlighted that all 295 cases brought by the police under the Coronavirus Act were found to be incorrectly charged.

The powers under the legislation passed last year allowed police to take action against any “potentially infectious person refusing to comply with a lawful instruction”, but this was shown to have been wrongly applied in many cases.

Richard Burgon said he would not support the government

Ahead of the parliamentary debate on the Coronavirus Act today, Labour left MP Richard Burgon said he would not support the government, which he described as “at risk of sleepwalking into another deadly winter”.

Burgon argued that MPs should have been given the opportunity to debate measures, such as compulsory mask-wearing, better ventilation, a strategy for tackling high infection rates in schools and higher sick pay.

Today was the third six-monthly vote on the Coronavirus Act. It was nodded through, as MPs wanting to vote against the legislation were unsuccessful in pushing for a formal division. MPs could only accept or reject the Act, not amend it.