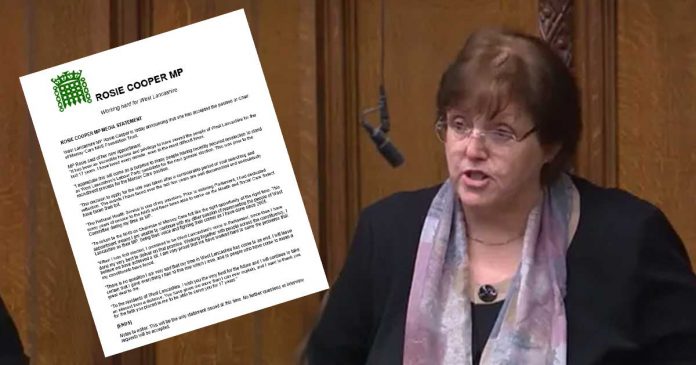 The Labour MP Rosie Cooper is to stand down triggering a byelection in her West Lancashire constituency this autumn, after taking on a new role with the NHS.

Cooper, who was targeted as part of a murder plot by members of a banned neo-Nazi group, said she had undergone a “considerable period of soul-searching” and admitted the events had “The events I have faced over the last few years are well documented and undoubtedly have taken their toll”.

Neo-Nazi Jack Renshaw admitted in 2018 that he had plotted to murder Cooper the previous year, including purchasing a 48cm knife. He was sentenced to life in prison in 2019, with a minimum term of 20 years.

The plot was foiled by whistleblower and former National Action member Robbie Mullen, who was secretly passing information to anti-racism charity ‘Hope not Hate’, which informed the police.

Ms Cooper said she had taken the decision after considerable “soul searching and reflection”.

She said it had been “an incredible honour and privilege” to serve in the Commons since 2005, and acknowledged her departure would “come as a surprise to many people” given she had recently been reselected to stand at the next general election.

But the Labour councillor said she understood why Ms Cooper, who previously worked for the NHS and has served on the Health and Social Care Committee, had taken on the role.

Ms Gibson said the MP had been a health campaigner for many years and it was “something close to her heart”.

She praised her work, including her campaign for a railway station in Skelmersdale and her push to make British Sign Language a recognised language after her own experience of growing up with deaf parents.

Labour sources are hopeful the party will win the byelection comfortably, given its performance at the local elections in May and its retaking of a “red wall” seat – Wakefield – the following month.

The contest will still be viewed as a test of Liz Truss’s ability as prime minister to turn the Conservatives’ fortunes around, having been languishing in the polls since last December. “Team Truss will want to avoid a collapse in vote share in their first electoral test,” said Rob Ford, an elections expert.

West Lancashire has been Labour since 1992, before which it was held with a relatively small majority by the Conservatives. Cooper has remained a backbencher throughout her time in parliament, and is a long-serving member of the health and social care select committee.