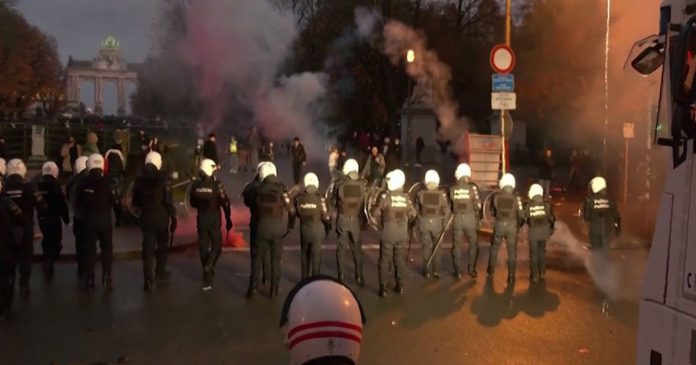 Vaccine sceptics and others angered by COVID curbs have protested in Brussels, Prague and other European cities. Omicron is driving up cases across the EU, with experts warning unvaccinated people are especially at risk.

Thousands of people took part in demonstrations against coronavirus restrictions on Sunday in Belgium and the Czech Republic, while cities in Germany and Vienna saw renewed protests on Saturday.

Weekend demonstrations have continued across the European Union as governments move to implement tighter curbs and new rules to encourage COVID jabs and booster shots.

The highly-transmissible omicron variant is driving up cases across the bloc, with infectious disease experts and medical workers warning that a surge in infections — particularly among the unvaccinated — could overwhelm hospitals.

Dozens of people were detained by police in Brussels, although authorities logged fewer clashes than in previous weekends

An estimated 5,000 people turned out for a protest in the Belgian capital, Brussels, on Sunday.

Protesters carried banners decrying what they said was a “vaccine dictatorship” and voicing anger over Belgium’s COVID pass requirement to enter restaurants, bars and other cultural events.

Dozens of people were detained by police in Brussels, although authorities logged fewer clashes than in previous weekends

The protest on Sunday was smaller and less violent than previous anti-COVID demonstrations in Brussels. Eleven people were detained ahead of the march for carrying fireworks, while another 30 people were arrested at the end of the demonstration after a group threw “projectiles” at police.

Belgium logged a 96% increase in new cases from December 30 to January 5 compared to the previous week, with hospitalizations up 28% over the same period.

In Prague, thousands of people demonstrated on Sunday against a proposal to make COVID-19 vaccination compulsory for certain age groups and professions.

Many in the crowd carried Czech flags while marching through the capital, voicing opposition to COVID vaccines, while others chanted: “Freedom, freedom.”

The Czech government is considering a measure that would make it mandatory for people over the age of 60 to get a COVID vaccine, as well as compulsory vaccination for medical staff, medical students, police officers and firefighters.

The compulsory vaccination policy was ordered in early December by the government of then-Prime Minister Andrej Babis. His government was later replaced by a new, five-party coalition under Prime Minister Petr Fiala.

The new government is now considering scrapping the mandate for the over-60 age group, but hasn’t ruled out compulsory vaccination for certain professions.

In the northern port city of Hamburg, over 13,000 people took part in the demonstrations, with some voicing anger over a recently passed vaccine mandate for people working in hospitals and nursing homes.

Many of the protests are organized by people in the so-called Querdenker (Lateral Thinker) scene — a protest movement that emerged during the COVID crisis that largely opposes COVID vaccines and restrictions to curb the spread of the virus.

In the western city of Minden, some 2,500 people formed a human chain in solidarity with a local politician whose home was targeted by a group of anti-COVID protesters.

In the eastern city of Dresden, over 3,500 people took part in a silent protest against increasingly radicalized and violent anti-COVID and anti-vaccine demonstrations in the region. They also lit candles outside the city’s Frauenkirche Church to remember those who have died due to COVID-19.

At counterprotests in Germany, some formed socially-distanced human chains to decry increasing radicalization and violence

At counterprotests in Germany, some formed socially-distanced human chains to decry increasing radicalization and violence

The Austrian capital of Vienna saw another weekend of mass protests against the government’s coronavirus restrictions.

On Saturday, some 40,000 people demonstrated against the government’s plans to implement a general COVID vaccine mandate.

Austrian Chancellor Karl Nehammer, who tested positive for the virus on Friday, said he intends to follow through on the mandate. It is set to take effect on February 1.

Austria, like many countries in Europe, is battling a surge in infections driven by the omicron variant. The country had managed to slow new infections during a recent lockdown, but the cases have risen rapidly since the strict curbs were lifted.