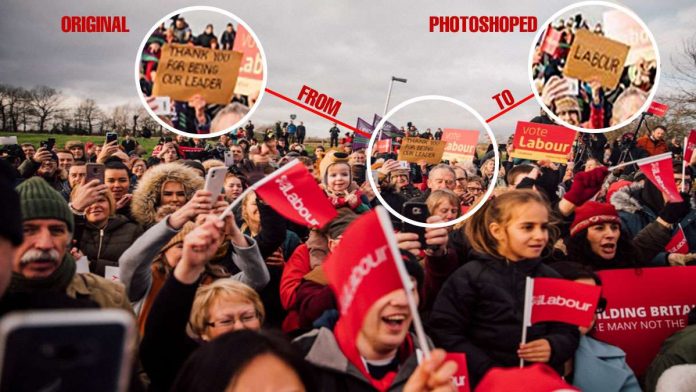 The doctored image shows Sir Keir Starmer’s ‘New Labour’ attempting to airbrush the past and popularity of its former Leader Jeremy Corbyn out of the party’s history.

The image posted on Twitter captures a huge crowd enthusiastically waving placards showing the popularity of the Labour Party with a graphics overlaid saying ‘Welcome to Labour’ Sir Keir Starmer Tweets: “On Thursday 6th May we have one of the biggest set of elections in our history. Government guidance in England lets parties talk to voters on the doorstep again. So you can head out in pairs, with your masks and help Labour win.”

Unfortunately, the image has been doctored and is from a time when Labour was actually popular and offered an alternative to the status quo.

You can forgive the Party for using an old image after all the covid restrictions and lockdown have prevented such gatherings but to try and airbrush Corbyn’s popularity out of the picture is just a little ‘Goebbels and the Ministry of Propaganda like!’ this takes cancel culture into the mainstream parties.

The Labour clearly didn’t want anyone remembering just who had created all that enthusiasm the photoshopped image was spotted by Twitter user Troovus.

Troovus spotted that the original version of the image didn’t match the version the edit was very specific. A hand-made placard in the original thanked Jeremy Corbyn for leading the party.

Here are the images used in Labour’s local election Launch by Sir Keir Starmer Tweeted by Angela Raynor before and after de-Corbynisation. ‘Thank you [Jeremy Corbyn] for being our leader’ changed to ‘Labour’

Just for clarity here is the doctored part of the image in the attempt to air brush Jeremy Corbyn out.

It’s not hard to understand why Labour wouldn’t want to remind people of the passion and vision that ignited in the party under its previous leader when the whole ‘marketing message’ of the party – ‘New Leadership’ – hopes people will forget, while Starmer’s few acolytes and allies of convenience desperately try to rewrite history.

Corbyn offered not only a sharp swing to the left but the rhetoric of a new style of politics that would encourage members to work for the selection of left-wing candidates for party offices and Parliament, and actively to participate in policy-making. In other words, Corbyn aimed at turning Labour’s grassroots into a new social movement with democracy at its root.

Under Corbyn the membership and the party was revitalised, he created the largest party in Europe with over 500 thousand members.