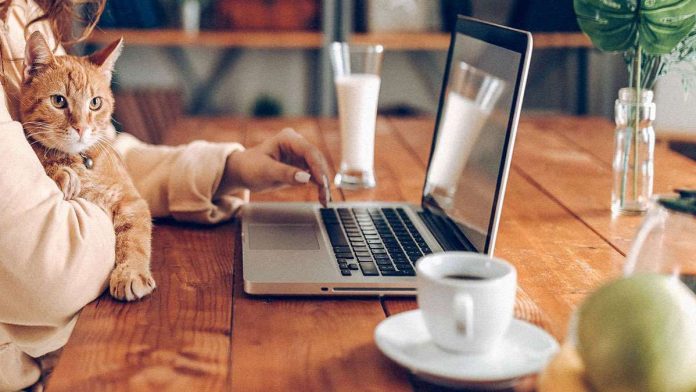 When working from home, there may be a new concern for workers other than going without pants.

To ensure employees do what they’re supposed to, some employers have begun using surveillance apps and programs to monitor worker productivity.

Teleperformance, which employs 380,000 people, plans to use specialist webcams to watch staff

This has raised some worker privacy concerns and the questions of whether this is legal or proper.

Thousands of staff at one of the world’s biggest call centre companies face being monitored by webcams to check whether they are eating, looking at their phones or leaving their desks while working from home, the Guardian has learned.

In a sign of potential battles ahead over the surveillance of remote staff after the pandemic, Teleperformance – which employs about 380,000 people in 34 countries and counts dozens of major UK companies and government departments among its clients – has told some staff that specialist webcams will be fitted to check for home-working “infractions”.

While these will in part be used for team meetings and training, the cameras are also connected to an artificial intelligence system that will randomly scan for breaches of work rules during a shift. If one is detected, a still photo will be sent to a manager and stored for up to 20 days, according to documents sent to staff.

According to the Guardian, if workers need to leave their desks, for example to have a drink, they will have to click “break mode” in an app to explain why – for example, “getting water” – to avoid being reported for a breach.

Eating while on shift is not permitted, staff are told. “If the system detects no keyboard stroke and mouse click, it will show you as idle for that particular duration, and it will be reported to your supervisor. So please avoid hampering your productivity.”

A training video about the webcam system, seen by the Guardian, says it “monitors and tracks real-time employee behaviour and detects any violations to pre-set business rules, and sends real-time alerts to managers to take corrective actions immediately”.

The move triggered warnings from unions and MPs about the normalisation of home surveillance by employers as growing numbers of workers move away from being office-based.

The revelations came to light after some of Teleperformance’s 10,000UK employees were told that cameras, including the AI-based scanning system, would be installed next month for staff continuing to work from home.

While not a household name, the France-based company is one of the world’s biggest suppliers of outsourced phone services, including customer assistance, telemarketing and technical support.

In Britain, its clients include the health and education departments of the UK government, NHS Digital, the Student Loans Company, the RAF and the Royal Navy. The companies it works for include Vodafone, eBay, Aviva, Volkswagen and the Guardian. There is no suggestion any of these were aware of or involved in planning the new surveillance system

Howard Beckett, assistant general secretary of Unite, said the union would “fight legally and industrially to prevent any push to normalise home surveillance”.

Andy McDonald, the shadow employment rights minister, said that particularly when companies were relying on home-working staff to keep them going, it was wrong to impose “invasive surveillance that will erode their rights to privacy and create a climate of fear and mistrust”.

Read more at The Guardian…

An example of other countries: The Dutch government has determined that workers should be compensated for expenses by their bosses – about two euros ($2.40) per working day, on average. That’s meant to cover not only coffee, tea and toilet paper used in work hours, but also the extra gas, electricity and water, plus the depreciation costs of a desk and a chair – all essentials that workers would never pay for in the office. “We have literally calculated down to how many teaspoons there are in an average household, so from there it’s not that difficult to establish the costs,” said Gabrielle Bettonville of family finances institution NIBUD, which is mainly funded by the government and researched the extra costs of remote working. REUTERS/Eva Plevier

Who’s house is it anyway?

If your employer proposes monitoring software, make sure you know exactly what is being monitored and the purpose. Monitoring is invasive and should not take place just for the sake of it; there should be a good business reason.

Make sure that there is a written policy and that it covers the circumstances in which data collected from monitoring can be used.

In particular, make sure you know what is and is not acceptable for you to be doing at work. Your employer should set out whether accessing private emails is acceptable and when such as during lunch breaks or whether you are allowed to use your work account to send/receive personal correspondence.

Working from home: Is there a right to privacy?

The right to ‘respect for […] private and family life’ comes from the European Convention on Human Rights and was adopted into UK law by the Human Rights Act.

The HRA holds a special place in UK law because it is treated as a yardstick against which interpretation of other laws should be measured. Where a convention right is raised, courts and tribunals are obliged to consider the right in relation to their decision.

All of the points below should therefore be read with this in mind and the basic position is that there is an enforceable right to a reasonable degree of privacy.

Is it legal for an employer to monitor employees working from home?

Legal tracking productivity WFH – what is the relevant law?

There are various pieces of legislation dealing with the ability to monitor employees and employee rights in relation to being monitored:

What is working from home monitoring?

What can my employer monitor when I’m working from home?

The most common forms of monitoring, especially as employees are increasingly working from home, is the use of surveillance software to monitor online productivity and internet use.

Can your employer monitor your Internet use at home?

Can an employer record calls when I’m working from home?

Phone calls have been monitored for many years, commonly in sales work where managers may be able to listen in on the conversation or monitor duration.

As more people work from home, one of the challenges employers face is how to ensure productivity remains at in-work levels. Short of regular supervision checks, one solution is to install monitoring software on computers.

Can businesses monitor employees who work remotely without consent?

The Telecommunications Regulations 2000 do allow employers to monitor employees without the employee having given consent but only in very specific circumstances:

This may seem very broad, but the Telecommunications Regulations are actually intended to restrict monitoring and surveillance activity. They are also subject to the DPA and GDPR.

Working from home and GDPR

Under both the DPA and GDPR, many monitoring activities will amount to data processing and monitoring may give access to personal data or even ‘special category data’ such as medical information. Even a permissible act under the Telecommunications Regulations may amount to a regulated activity.

Even where monitoring is permissible under data protection law, employees may still be able to claim that it amounts to a breach of contract or that it was imposed in a discriminatory way.

Our advice is that, in most cases, any surveillance of employees should be done with their knowledge and consent. The DPA’s Code of Practice states that employers should have an electronic communications policy which is communicated to employees.

Where that is not done, claims against the employer are much more likely to be successful even where the monitoring was reasonable and otherwise lawful.

Any dismissal which is carried out following surveillance of which the employee was not aware and has not consented to may be deemed unfair. This includes conduct and capability dismissals.

If an employee discovers that they are being monitored without having given their consent, the employer could be facing a constructive dismissal claim. The use of surveillance, particularly if it is personal or invasive, could well amount to a breach of the implied term of trust and confidence.

Alongside the tribunal claim which may include compensation, the employee can also make a referral to the Information Commissioner who has the power to fine for breach of data protection law.

Employers should be particularly careful with any targeted monitoring. An employee who is singled out may well argue that it is due to a protected characteristic and it is unlikely that an employer will have any evidence to the contrary if they are only monitoring that one employee.

Around 100,000 civil servants vote to strike over pay, pensions and jobs