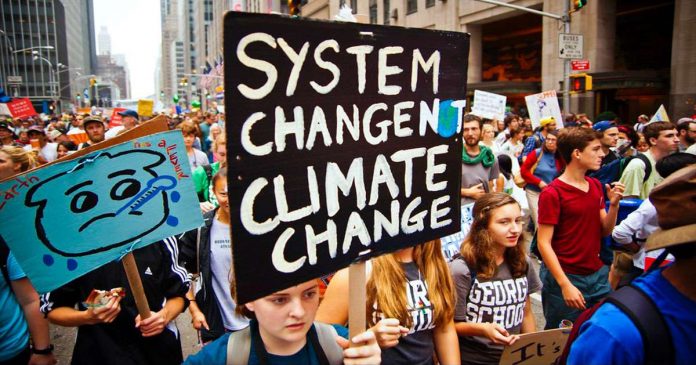 The pandemic has exposed the rottenness of the system. We simply can’t go back to what wasn’t working before. This is a great opportunity to dig deeper into how the system works — or doesn’t — and build a new one.

Young people today know that the present system is utterly broken. Research conducted by the Institute for Economic Affairs which found that 75% of young people in the UK agree with the assertion that climate change is a specifically capitalist problem, while 78% blame capitalism for Britain’s housing crisis.

Not only do new generations recognise that the system is broken, they are sceptical that mainstream politicians will take the necessary, radical action to mitigate capitalism’s worst excesses. The failure of world leaders to take meaningful action to halt global warming at COP26 underlined this bleak reality. Greta Thunberg, as ever, nailed it when she said that leaders at “COP26 even watered down the blah, blah, blah.”

The steady drift to the right of  the present Labour leadership, with its commitment to the status quo and promises about becoming the party of business, have added to growing disillusionment.

Many young activists have left while growing numbers have been expelled without rhyme or reason, usually via email.

Meanwhile, despite their internal civil war, the Tories are rapidly building the framework of an authoritarian state.

Various pieces of legislation severely restrict the right to protest and give police unprecedented powers, diminish the right to vote through ID cards,  create a Guantanamo-style processing system for refugees and asylum seekers and destroy the Human Rights Act.

Our free e-learning course, Rethinking Our Future, is now open for registration to begin on 17th January. Designed to give participants confidence and courage in their understanding of how the system works and the role of ideas and ideologies, they will learn to identify how we can overcome the major barriers to social progress.

The course is divided into three modules: Unmasking the State, which deals with the state, neoliberalism and democracy; Composting Capitalism, which explains how the system works and suggests alternatives; and Philosophy for Revolution, which shows how to sharpen our ideas in the cause of system change.

A group of experienced activists have brought together the most critical learning about these topics in bite-sized chunks in a way that you won’t learn in schools, universities and definitely not through the mainstream media!

Each part has 20-minute audio-video sessions. There will be issues to think about and resources to download. You can chat with others and send in comments. Live Zoom sessions will bring participants together for collective discussions. Crucially, participants can complete the course at their own pace.

Acute awareness of systemic collapse is pushing many young people to anxiety, nihilism and grief; it’s time to seize this opportune moment, and harness young people’s potential revolutionary energy to build a movement for real democracy. Then people could take control of their lives and determine what happens in their communities, regions, towns, cities and, above all, in their workplaces.

The time to break the downward spiral of climate chaos and species extinction, gross racial and social inequality is now. What you and others do collectively is decisive in shaping a different, democratic future to the disastrous one capitalism offers. With the new year, it’s time for a new system.