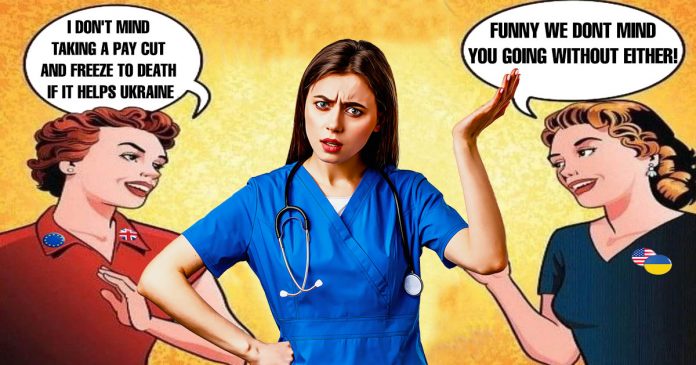 While public workers strike due to a cost of living crisis created by extortionate energy inflation going into double figures the UK continues to feed a war while starving its people.

The UK is to send a number of Challenger 2 tanks to Ukraine to bolster the country’s war effort, Prime Minister Rishi Sunak has said.

He spoke to Ukraine’s President Volodymyr Zelensky in a call on Saturday, during which he confirmed he would send the equipment and additional artillery systems.

The UK is already the second largest military donor to Ukraine, committing £2.3bn in 2022 and a promise to at least equal that amount in 2023.

Shadow defence secretary John Healey said the government had “Labour’s fullest backing” for the decision to send the Challengers.

He said: “Modern tanks are crucial to Ukraine’s efforts to win its battle against Russian aggression.”

The UK is the second-biggest donor nation to Ukraine after the United States, which has pledged over $60bn in humanitarian, financial and military aid, according to the Kiel Institute. The emphasis is on military aid.

While much of the world’s attention has focused on military and humanitarian aid to Ukraine, a large part of the help the U.S. is giving goes straight to Zelensky’s government as cash support for its operations. “Financial assistance is also critically important,” Zelensky said in his speech to Congress. “Your money is not charity, it’s an investment in the global security and democracy that we handle in the most responsible way.”

Of course, democracy no longer exists in Ukraine, Zelensky had opposition leaders arrested and their parties disbanded claiming they all had links with Russia. But we all know that’s the kind of democracy the US have no issues with.

Since 2014 #EU has spent over 15 Billion Euro on Ukraine’s ‘Reform Process’- But only last September, the EU Court of Auditors found Ukraine to be the most corrupt country in Europe. Now Zelensky has banned 9 Opposition Parties + most Opposition Media – Is Ukraine a Democracy…? pic.twitter.com/2YpHfTmGCc

What is clearly a US proxy war, the latest in America’s forever wars where we will see another decade of US interventions, another excuse to feed the industrial arms complex, instead of building schools, hospitals, and universities or creating social housing. Another decade of public money is to be spent on kill, crush, destroy, while people everywhere suffer for the benefit of a few.

Of course, the Industrial arms complex is now global, its influence dictating decisions made in governments around the world. Threats of war, even rumours of war can send their relative corporations’ shares rocketing in a very literal sense creating billions in profit without even a shot fired.

The withdrawal of the US military from war-torn Afghanistan has been widely seen as a failure in politics. However, analysts pointed out that the 20-year war means rather an “extraordinary success” for the American Military-Industrial Complex (AMIC) composed of private arms dealers, lobbyists and Pentagon officials who perpetuated war and got immense profits from the attacks.

Experts pointed out that from Iraq to Syria and Afghanistan, the US’ military-industrial complex, fueled by huge economic lure, has created an enemy target: terrorists.

It is at this stage we are reminded of the US former President Dwight Eisenhower’s warning in early 1961 that “an immense military establishment and a large arms industry” had emerged as a hidden hand in US politics.

Eisenhower cited the ‘Military-Industrial Complex’ as a grave warning to the American people based on his experiences of an unlimited wartime economy coupled with a political environment as witnessed during, and after, World War 2 (1939-1945) – the warning being, to not let the military-industrial establishment dictate America’s actions at home or abroad for such unchecked power would begin to usurp the inherent freedoms found in the very fabric of democracy.

For right-minded people, the only resolution should be not only to condemn the illegal aggression of Russia but to condemn the lust for war by those that will gain the most and lose the least.

There should be no cheerleaders for war. It should be a UN priority, we should see the ambassadors sitting until some sense is made. The world’s only mission must be to bring about conditions for a ceasefire and negotiations for genuine efforts to secure peace.

Instead, what has been created, more by design than accident is another perfect condition for the disaster capitalist to steal from the public treasuries.

The byproduct of conflict wherever the West is involved is profit. From Energy to food the oligarchy is always winning and the workers paying the price workers.

The reality is that flooding Ukraine with weapons, and other actions escalate the war and run the risk of igniting a direct conflict between NATO and Russia.

We are left with a one-sided narrative that excuses the Western role in what is now happening. One that wants to shove down the memory hole the proceeding 8 years of the Ukrainian civil war. A proxy war that produced the full onslaught of nationalism and the rise of the far right across Ukraine.

MEP Mick Wallace once said the US and Nato had made it clear they were prepared to fight Russia, to undermine Russia “down to the last Ukrainian”.

Of course, the cost to Ukraine is far more than money. While the people fight for each other and their country the politicians sell their land and economy to the West, The oligarchy led by globalists such as BlackRock profits, not only from the war but from any peace that follows.

It’s a conveyor feeding an insatiable appetite: The energy companies keep pushing up their profits, which is the key influence in the current inflation rates, inflation that has caused this current cost of living crisis, a cost of living crisis which results in workers having little choice but to negotiate pay settlements to cover the cost of inflation and ironically their extortionate energy bills.

One of the biggest winners apart from the obvious is the U.S. LNG exporters, who have emerged as big winners in Europe’s energy crisis.

Emerging as big winners of Europe’s supply crisis as they export record volumes to the European Union for the third consecutive month at prices that have rallied since Russia’s invasion of Ukraine.

European gas prices have hit all-time highs just as exporters of LNG in the United States completed projects that had been under development for years to deliver abundant shale gas supplies to international markets.

Andrew Goldman, the co-founder of Western LNG and a former Joe Biden adviser must be raking it in.

This US proxy war is an affront to the British people. We are a country that fought against the goosesteps of Nazisim across Europe in the second world war we find our government ploughing money into a country that has pulled that rotten corpse out of the ground and venerates the very Nazis are grandparents fought against. those same grandparents that sit in the cold too scared to turn the heating on for fear of an extortionate energy bill. A government all too ready to supply money for war but yet refuses to even talk to our the unions acting in negotiations for better pay and conditions for workers.

It also begs the question if Ukraine can give Russia such a bloody nose with hardly a jet fighter to its name or a ship in its navy and an army made up of a ragtag militia using thrown-together equipment, then why are 30 countries in the west spending 2% of their GDP on NATO defence, that for the UK alone is a whopping £58 billion a year. Maybe now Russia has been shown to be a paper tiger we can spend that money elsewhere…