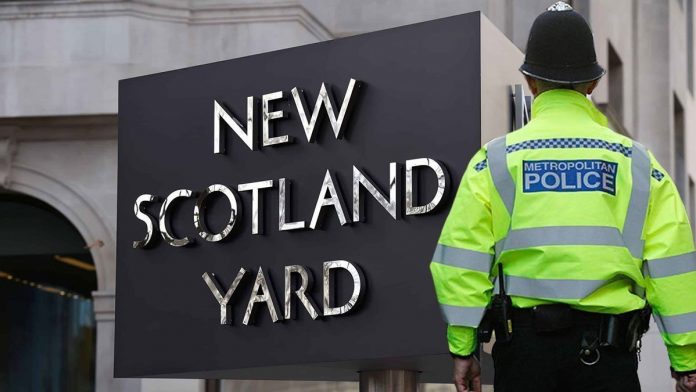 A Met Police officer has been convicted of being a member of a banned neo-Nazi terrorist organisation.

Benjamin Hannam, of Enfield, north London, was found to have lied on his police application form and remained in the National Action group after it was outlawed.

He was also convicted of two counts of fraud following a trial at the Old Bailey.

Hamman is the first British officer to be convicted of a terrorism offence.

After the police constable’s arrest in March last year, detectives found an image on his iPhone showing him in police uniform, with a Hitler-style moustache superimposed on his face seen on (Sky News) along with a Nazi badge on his lapel.

They also found he had downloaded a knife-fighting manual and a copy of the “manifesto” of the right-wing extremist Anders Breivik, who murdered 77 people, mostly children, in bomb and gun attacks in Norway in 2011.Advertisement

The young officer’s activity was discovered when an anonymous hacker using the name “antifa-data” (anti-fascist data) hacked into a neo-Nazi forum called Iron March and published details of its 1,185 users online.

A judge had previously ruled Hannam’s trial could not be reported because he was also facing charges of possessing prohibited images of underage girls.

But after he pleaded guilty to the charges towards the end of this trial, his links to far-right terrorism can now be reported.

After his arrest, PC Hannam’s stop and search records, crime reports and case files were all the subject of a detailed review by the Metropolitan Police.

The force said that the review found that there was “no evidence that Constable Hannam targeted individuals as a result of any right-wing views”.

Benjamin Hannam, 21, of north London, was originally charged with five offences following the investigation by the Met’s counter-terrorism command and has been suspended from duty, Scotland Yard said.

As well as charges of belonging to or professing to belong to National Action between 17 December 2016 and 1 January 2018, contrary to the Terrorism Act 2000, he has also been charged with fraud offences along with possessing an indecent photograph of a child.

The Met said that he falsely represented in his application to join the force that he had not been a “member of an organisation similar to the BNP, namely National Action”.Hannam has been bailed to appear at Westminster magistrates’ court on 6 August.

The fact that the officer had been a supporter of a neo-Nazi terror group and got past vetting will be especially embarrassing for Met chiefs.

It comes at a time when the Met is facing questions and criticism over its record on policing during protest. More importantly, the questions surrounding the murder of Sarah Everard were a serving officer accused of indecent exposure three days earlier had been allowed to continue in his duties going on to murder an innocent young woman, or the case of a met officer accused of multiple rapes who has to continue in his duties for the last three years. At this point, community confidence is under strain.

Who are National Action?

National Action, founded in 2013, is assessed to be a terror group, according to security officials who advised the British government.

It became the first far-right group to be proscribed in 2016, when Amber Rudd was home secretary, because it was assessed to be advocating violence to further its ideology.

Announcing the move in 2016, Rudd said: “National Action is a racist, antisemitic and homophobic organisation which stirs up hatred, glorifies violence and promotes a vile ideology. It has absolutely no place in a Britain that works for everyone. Proscribing it will prevent its membership from growing, stop the spread of poisonous propaganda and protect vulnerable young people at risk of radicalisation from its toxic views.”

Hannam, who was arrested in March, worked in frontline policing with the north area basic command unit (BCU). Its acting commander, Det SuptElla Marriott, said:“These are extremely serious charges for anyone to face, and I fully understand and appreciate how deeply concerning it might be for the public, and particularly local communities here in north London, that the charges are against a serving police officer.

“The Met, and indeed the public, does not accept this behaviour … we recognise the need to have the trust and confidence of all our communities.”

Anyone found to be a member of, or offering support to the proscribed groups can face up to 10 years in jail.

Counter-terror chiefs have described the far right as the fastest-growing terror threat.

The British military has put in extra measures amid concerns about attempts at far-right infiltration and concern about some forces’ apparent support for extremism.

Cressida Dick to step down as Metropolitan Police chief