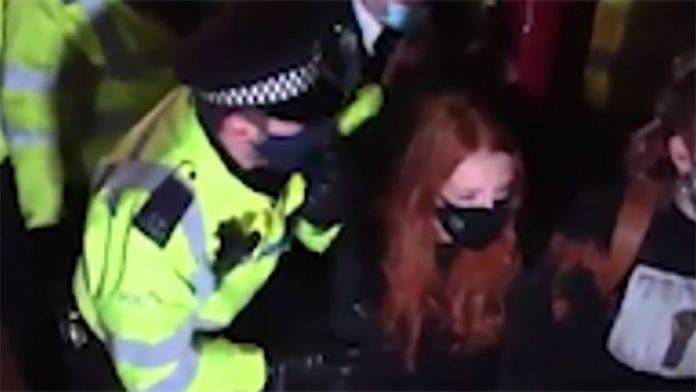 Clashes have broken out between police and mourners at a vigil for Sarah Everard.

Footage posted on social media shows police and mourners jostling near the Clapham Common bandstand, where the Reclaim these Streets vigil was due to be held before it was cancelled due to Covid-19 safety concerns.

Metropolitan Police officers walked on to the bandstand and were met with boos, jeers and chants of “shame on you” as they tried to disperse people from the event.

Members of the crowd could be heard shouting “shame on you” and “you are scum” after the brief clash, while one woman screamed, “you’re supposed to protect us”.

The whole incident could have been handled better by discretion rather than the authoritarian tactics employed by the Met.

Despite police orders, hundreds of people attended the vigil at Clapham Common, close to where the 33-year-old Sarah Everard disappeared.

Earlier Kate Middleton The Duchess of Cambridge had discreetly attended the vigil, it was oblivious to all but the police, people felt the need to gather and pay their respects and mourn this tragic taking of a life.

Unfortunately both bad policing from on the ground and high command led to a #Disgraceful piece of police work.

A video posted on Twitter appears to show officers grabbing a woman and leading her away, while onlookers screamed and shouted.

Officers surrounded the bandstand, where people have laid flowers, and members of the crowd could be heard shouting “shame on you”.

Police attacking and arresting those at the vigil for Sarah Everard.

Howard Beckett Tweeted: Disgraceful policing Women want the world to know they feel unsafe on our streets. You don’t meet that with violence. You meet that with compassion.

Women want the world to know they feel unsafe on our streets.

The event began peacefully but tensions escalated as speakers made statements about police and officers began to ask people to go home.

Today, Wayne Couzens appeared in court, charged with the kidnap and murder of Ms Everard.

A vigil was originally arranged by Reclaim the streets but was ‘cancelled’ due to coronavirus restrictions.

On Friday, a High Court judge refused to intervene on behalf of the group in a legal challenge over the right to gather for a protest.

The mourners defied an earlier police warning and gathered to call for an end to violence against women a day after a Met Police officer was charged with kidnapping and murdering Ms Everard.

However, there can be no excuse for the poor quality and bad choice in tactics. This has led to anger being directed at Dame Cressida Dick with the hashtag #DickOut trending.

Scotland Yard has been slammed for its handling of the gathering and for its earlier refusal to allow a vigil to take place despite promises it would be Covid-secure.

Liberal Democrat leader Sir Ed Davey has called for Metropolitan Police Commissioner Dame Cressida Dick to “consider” her leadership of the force, while Mayor Sadiq Khan said he was “in contact” with her and was “urgently seeking an explanation”.

Home Secretary Priti Patel said she has asked for a “full report on what happened”.

Police attacking and arresting those at the vigil for Sarah Everard.
This is absolutely disgusting. #ReclaimTheseStreets pic.twitter.com/TPF2Am0ZfB

Campaign group Sisters Uncut, which had representatives present at the demonstration, tweeted claiming that “male police officers waited for the sun to set before they started grabbing and manhandling women in the crowd”.

Cool heads like Chelley Ryan stated: I don’t blame the police for the actions of one psychopath who happened to be a police officer any more than I blame all Dr’s for the actions of Shipman. I do blame them for their utterly disgraceful and heavy handed treatment of peacefully protesting women!

I don’t blame the police for the actions of one psychopath who happened to be a police officer any more than I blame all Dr’s for the actions of Shipman. I do blame them for their utterly disgraceful and heavy handed treatment of peacefully protesting women! #ReclaimTheseStreets

The Duchess of Cambridge Kate Middleton laid a bunch of daffodils she picked from the gardens of Kensington Palace as she made a personal pilgrimage to the memorial for tragic Sarah Everard.

The duchess, who attended without William or her three children paused for around five minutes reading the cards and looking at the sea of flowers laid in memory of the murder victim.

Kate, 39, who was without obvious minders, laid the flowers she had personally picked from the gardens of her home at Kensington Palaceand walked alone across the common back to her car.

A royal source told the Mirror: “The Duchess decided to make a private visit after being horrified by Sarah’s tragic murder.

“She remembers what it is like to walk alone as a young woman in London and elsewhere and like so many other women, has been thinking deeply about her experiences walking alone at night.

It was important for her to make the visit and pay her personal respects to Sarah and to Sarah’s family.

“The Duchess remembers what it was like living in London and being a woman walking around the streets of the capital before she married William.

“She wanted to do it privately and felt it was the right thing to do.

Mystery: How Wealth Creates Poverty in the World