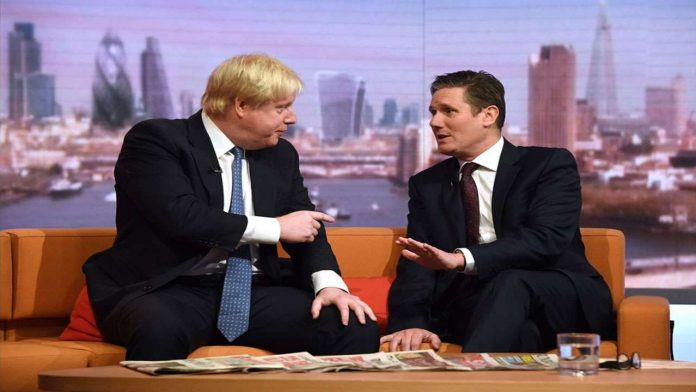 Six opposition parties in the Commons are urging the Speaker, Sir Lindsay Hoyle, to allow a vote on an inquiry into Boris Johnson’s “consistent failure to be honest” in statements to MPs.

They want the Speaker, Sir Lindsay Hoyle to let them table a motion saying that Johnson’s conduct should be referred to the committee of privileges, on the grounds that making a deliberately misleading statement to MPs amounts to a contempt of parliament under the Commons rulebook, Erskine May.

In light of the present situation and the growing public anger at the blatant corruption, cronyism, and sleaze being practiced by politicians, it may well pass the vote if some Tories feel compelled or pressured by their constituents enough to do the right thing or at least force the debate on the question of honesty.

Although the motion would not likely pass a debate on this subject – if the Speaker were to allow one – would be highly embarrassing to the prime minister.

Unfortunately, Sir Keir Starmer declined to sign the joint letter from the six other opposition parties calling for an inquiry into the prime minister’s “consistent failure to be honest”.

The Labour leader, Sir Keir Starmer, was invited to sign the letter, but declined. A party source said Labour did not normally sign up to initiatives launched by other parties.

Diane Abbott MP tweeted: “Baffling that @Keir_Starmer has refused to sign a letter signed off by six other party leaders calling for an inquiry into @BorisJohnson and his lies. Everyone knows Boris is an inveterate liar #BorisJohnsonOut “

Baffling that @Keir_Starmer has refused to sign a letter signed off by six other party leaders calling for an inquiry into @BorisJohnson and his lies. Everyone knows Boris is an inveterate liar #BorisJohnsonOut https://t.co/KK0Klakp0H

For many who have followed Sir Keir Starmer’s rapid orchestrated rise to the top, this is not a surprise, Starmer has many questions left unanswered from his time has DDP, most certainly those surrounding the attempted extradition of Julian Assange by the Swedish authorities not to mention the waylayed donors from his leadership campaign who all turned out to be the Anti-Corbyn brigade but most obviously the buried #LabourLeaks.

Lucas was partly inspired to take action by a video posted on Twitter by the campaigner Peter Stefanovic about what he describes as Johnson’s “lies”. It has attracted more than 11m views.

By working TOGETHER we have sent a message to UK media that if they won’t hold this Prime Minister to account for all his lies we will damn well do it ourselves!

When will @BBCNews catch up? pic.twitter.com/PlvEkEij1V

“It’s hard to recall any prime minister who has treated parliament with the contempt that this one does,” said Lucas.

“There is a normalisation of lying to the house which is deeply dangerous, especially coming from an increasingly authoritarian government which is looking at every means to avoid accountability.”

In their letter, the six MPs express their “deep concern” that the PM’s repeated failure to be truthful is damaging the reputation of the Commons.

They go on: “This is not a question of occasional inaccuracies or a misleading use of figures: it is a consistent failure to be honest with the facts, or to correct wrong information at the earliest opportunity when misleading information is given. This, we believe, amounts to a contempt of the house.”

The letter cites six examples of Johnson giving misleading information to MPs: saying the economy had grown by 73% under the Conservatives, when the figure covered the period since 1990 (including Labour’s term in office); saying CO2 emissions had been cut by 42% since 2010, when the real figure was by 38% since 1990; saying the nurses’ bursary had been restored, when the replacement arrangement is less generous; falsely saying the number of families living in poverty had been cut by 400,000 since 2010; falsely saying Bridgend was going to be a battery manufacturing centre; and saying Covid-related contracts had been published when they had not.

When challenged about comments like this, No 10 will sometimes acknowledge that an error was made, but more usually brushes aside the complaint or argues that Johnson was misunderstood.

Johnson himself almost never corrects the record in the chamber, and Downing Street does not say his record for honesty is problematic – despite the fact that Peter Oborne, who was political editor of the Spectator when Johnson was its editor, has recently published a book, The Assault on Truth, wholly devoted to what he describes as Johnson’s “lies”. Oborne, a political reporter for almost 30 years, says he has never encountered a senior British politician “who lies and fabricates so regularly, so shamelessly and so systematically as … Johnson”.

The opposition MPs want the committee of privileges to investigate Johnson because other avenues of complaint appear closed. Knowingly misleading parliament is against the ministerial code, but only the PM himself can order an inquiry into breaches of the code.

The code of conduct for MPs says “honesty” is one of the values they should respect, but the parliamentary commissioner for standards does not investigate complaints about MPs making false statements in the chamber.

Intentionally misleading MPs could be a contempt of parliament, and contempt allegations can be investigated by the committee of privileges.

But the committee can only launch an investigation after a vote for one by MPs, and it is for the Speaker to decide whether a debate on such a motion can be held.

The Speaker’s office said it would not be commenting on private correspondence with MPs.

In response to the claims from the opposition MPs, a government spokesperson said: “The prime minister follows the ministerial code.”

However, recent events have shown that statement needs qualifying the best way right now is not only another inquiry but some cold hard questions being asked in parliament that we can all witness.

If Starmer has not got the gumption to work out how to oppose the Tories he needs to work with others to do his job if that means signing a joint letter to pressure the speaker into forcing the debate on the question of honesty, then so be it.