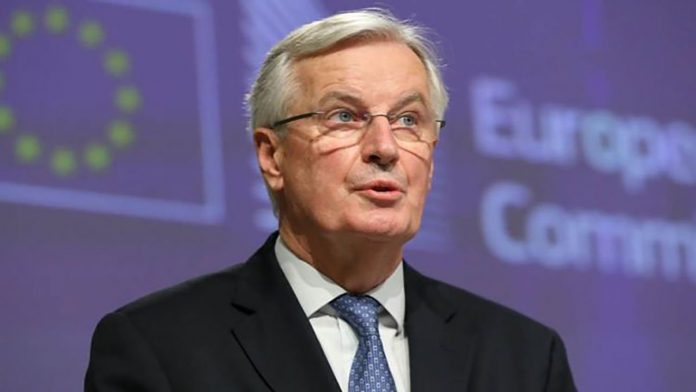 The former Brexit negotiator says France should press the pause button on immigration.

Barnier showing his colours and playing to the French crowd on migration.

Barnier, who is tipped to run against Emmanuel Macron in next year’s French presidential election, called for a moratorium so that France could “take the time to verify, evaluate and if necessary change” its immigration policies.

Immigration to Europe is linked to “terrorist networks which use migration flows and infiltrate them,” he said.

Barnier, a conservative former finance minister, said immigration was a threat to the stability of French society:

“We need to take stock of the situation, stop family reunions,” he said. “We need to look at the way we give residency permits, health-related permits and the way we use the resources of our [benefits agency].”

“There are links between [immigration flows] and terrorist networks which try to infiltrate them,” he told RTL-LCI-Le Figaro on Sunday, adding that he didn’t think all immigrants “including those who are trying to cross the Mediterranean to find a better life, are major terrorists or delinquents.”

Asked whether his comments would call into question his reputation as a moderate Gaullist, Mr Barnier said: “The problems of immigration are not moderate. I know, as the politician that I am, to see the problems how they are and how French people experience them and to find solutions.”

Barnier claimed that the stoppage should last for three to five years and include discussions with other EU nations on policing the external borders of the Schengen area.

As an EU member, France would still be obliged to uphold the free movement of people within the bloc.

“The problems of immigration are not moderate,” Mr Barnier told France 2 television on Tuesday.

“I try as a politician to see problems as they are, the way that French people experience them, and to find solutions.

“I think that we need in effect to take some time, for three or five years, to suspend immigration.

“But we need to examine all the procedures from all sides. We need to talk to our neighbours on the question of Schengen, which needs to be applied with stricter border controls.”

Asked whether he meant the external Schengen border or internal EU borders, he said: “Yes, the external borders of Europe.”

As chief Brexit negotiator, Mr Barnier bemoaned the limits on free movement brought about by Britain’s decision to leave the EU.

The 70-year-old is tipped as a possible conservative candidate against Mr Macron at the 2022 presidential election.

The comments prompted outcry in the U.K., where Barnier has been the focus of intensive coverage throughout the Brexit negotiations.

Some commentators quipped that if Europe had taken a tougher stance on immigration as currently proposed by Barnier, Brexit may not have happened.

“Barnier advocating complete cessation of immigration for 3-5 years + suspension of Schengen. Ironic, because if the EU had allowed much milder restrictions on free movement of people, Brexit would probably never have happened. (And yes I know he probably means non-EU immigration),” tweeted Financial Times commentator Gideon Rachman.

The idea of a pause on immigration has become a popular among right-wing politicians in France in recent years.

Gilbert Collard, a French MEP from the far-right National Rally, described Mr Barnier as a “pickpocket” for adopting one of his party’s proposals.

The former Brexit negotiator’s bombshell proposal comes after he spent years battling against Britain’s efforts to take back control of our own borders.

Quite something. Barnier wants to suspend all immigration to France and open a debate on Schengen/EU borderless travel sone https://t.co/CMv9NusyPM

Filippo Grandi was meeting with the EU’s foreign affairs chief Josep Borrell on Tuesday as part of a three-day trip to Brussels, where he said the bloc plays a “crucial role in supporting conflict resolution and giving humanitarian assistance to those impacted” by forced displacement around the world.

Borrell also emphasised the EU’s commitment to addressing forced displacement and protecting those in need, which he says is “strongly reflected” in the EU’s latest migration pact, which was proposed by the European Commission last year.

The New Pact on Migration and Asylum aims to build confidence on the issue by striking a balance between responsibility and solidarity, which critics argue has not been there previously, after years of disagreement between member states.

A key aspect of the proposal allows EU countries that have been reluctant to take in migrants — such as Poland, Hungary and Austria — to contribute by returning migrants who don’t qualify for asylum or by helping with logistical support at the bloc’s borders.

Jérôme Riviere, a French MEP and member of Marine Le Pen’s far-right political party National Rally, says that the EU must be fair, but firm when dealing with migrants attempting to come to Europe.

“We have to say, look, Europe has a lot of problems to tackle, especially at the end of this covid crisis,” Riviere told Euronews. “And we are telling very kindly to these people, you cannot come in illegally. And if you want to come in illegally, there is no way you will ever find a legal way in our country. This is mainly how Australia has solved its problem. Anybody coming illegally has zero chance of ever being legalised.”

The European Commission’s latest migration proposal is still yet to be agreed upon by the European institutions.