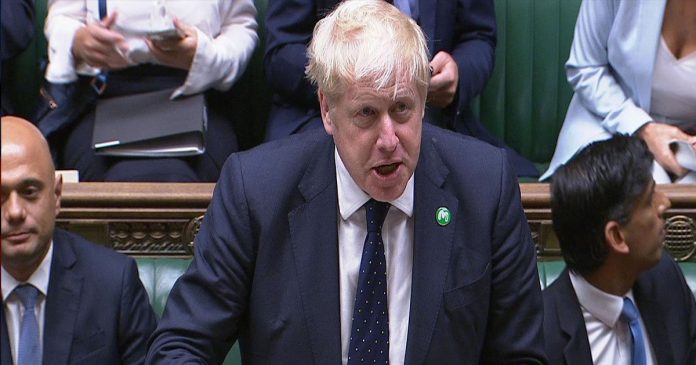 The reality is social care needs funding but when this government can find and give away to the wealthy £20billion in unaccountable Tory covid cronyism, we have to ask what’s happening with our money.

Boris Johnson finally announced the social care plan he claimed was ‘clear and prepared’ two years ago – but faces fury over the detail, and his manifesto promise-breaking 1.25% rise to National Insurance Contributions (NICs)

Cabinet ministers signed off the proposals at a meeting in No 10 earlier, with the PM’s official spokesman saying: “There was strong agreement that this is a long-standing issue, particularly on the social care side, which had been ducked for too long and which needed to be addressed.”

Johnson confirmed a tax rise for millions of British workers as he broke his manifesto promise in a long-overdue bid to reform social care.

There will be no increase to income tax, the Conservatives have pledged.

“We promise not to raise the rates of income tax, national insurance or VAT. This is a tax guarantee that will protect the incomes of hard-working families across the next Parliament,” reads the manifesto.

We look at the results of that promise broke

The Prime Minister had claimed he had a “clear plan prepared” to fix the care crisis in 2019 – and six months later won an election promising not to hike income tax, VAT or National Insurance Contributions (NICs).

He also appeared to drop his solemn 2019 manifesto “guarantee” that “no one needing care has to sell their home to pay for it”.

The move will spark fury, just a fraction of the fund will actually go to social care before 2025 – with the rest funding Covid backlogs.

The Director of the IFS, told BBC Radio 4’s The World at One that this should really be seen as a 2.5% national insurance hike, and that this was “the biggest tax rising year in many decades”. He explained:

This is £12bn on top of £25bn of tax rises in the budget – this must be the biggest tax rising year in many decades.

Where’s all that money going?

The extra cash for the NHS will be targeted on boosting capacity in hospitals amid predictions that the backlog could more than double to 13 million people on waiting lists by the end of this year.

NICs will rise 1.25% for both employers and employees UK-wide in April 2022 to raise £12bn a year for both health and care.

It is also believed the prime minister will announce that the threshold for people to start paying for their own care – currently if you have assets of £23,350 – will rise to around £100,000.

This would protect more people from having to pay.

Meanwhile, it is expected that pensioners in work will also have to pay the new sum, despite people being exempt from national insurance payments after reaching state pension age.

The social care reform proposals will apply to England only, but tax changes will affect the whole of the UK.

From April 2023, the NICs rise will be charged at the same rate but become a ‘Health and Social Care Levy’ that appears separately on Brits’ payslips. From this point, it will also apply to workers who are above pension age – which NICs do not.

From October 2023, the money will be partly used to fund a new £86,000 cap on the amount people must pay for care over their lifetimes – and a new-style £20,000 floor, which saves people from paying for their care once assets fall below a certain level.

Of the £5.3bn, half of it will go towards new costs caused by the cap and floor – leaving a measly £2.5bn or so for workforce, training, councils and better integration with the NHS.

Much of the rest will go on clearing Covid backlogs in the NHS – with the amount for social care only ramping up after 2025.

Tory ex-minister Damian Green demanded more direct cash for social care now, saying: “My fear is… there will never come a point where there is enough money in this fund to be transferred to social care that needs it now.

Speaking ahead of the announcement, Mr Zahawi told Sky News: “I think you have to at least have a really good go at making sure you fix a problem.

“It would be presumptuous and I think completely arrogant to say of course it would fix the problem.”

“I am just being respectful and cautious and not being arrogant to say – of course, everything will be fixed in five minutes – it won’t, both in terms of the backlog, we’ll tackle it, we want to reduce it, but it will increase before it gets better.”

The prime minister claims the social care package is a “fair, reasonable and necessary plan” to ensure the NHS has the long-term funding it needs.

But he is facing a furious backlash from ministers and backbench MPs who are incensed that the prime minister is poised to break a promise in the Tories’ 2019 election manifesto not to raise national insurance.

Labour MP Richard Burgon suggests social care costs should be funded by a wealth tax. He recommends a 10% tax on those with over £100m, which would raise £69bn.

He says the Tories don’t have the guts to take on the super-rich who fund their party.

There’s some praise for Burgon from the PM, who says at least he has the guts to say he would tax people in this country before pointing out he hasn’t heard any credible alternative from Labour frontbenches.

Jon Trickett (Lab) says the cap will be Johnson’s poll tax. He says in his constituency the average home is worth £130,000; in Johnson’s, it is worth £500,000. He says that means the new rules will protect much bigger inheritances in constituencies like Johnson’s.

Paul Johnson, director of the Institute for Fiscal Studies (IFS), has said National Insurance is “not the right” tax to increase to pay for social care reforms.

The economist tells BBC Radio 4’s World At One programme: “We always knew we were going to need tax rises during this decade to pay for health and social care.

“This is not the right tax rise – income tax would be better, some other ones would have been better.

“It is not a terrible one. It is broad-based, the higher earners will pay more than lower earners.

“If you had to do something with income tax, National Insurance or VAT, it would have been better if it had been something which impacted all generations similarly, it would be better if it affected people with rental income and so on.

“But if you’re going to raise an extra £12 billion, which this looks like it will, it is not so bad.”

It’s worth noting that NI will only increase in the coming financial year. From 2023, a new and separate Health and Social Care Levy will be used to pay for the reforms.