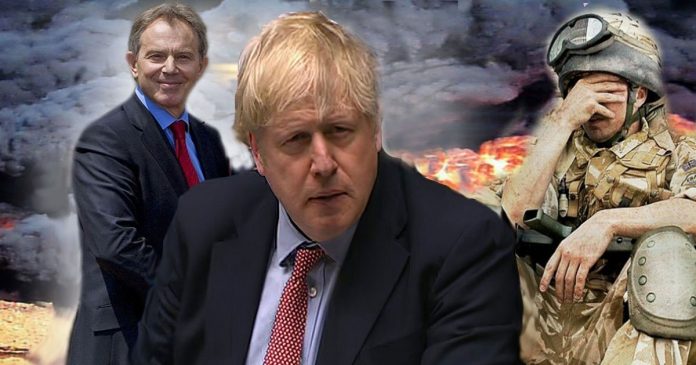 A Land Fit for Heroes: A repeating story of letting down those that give most, from the NHS to our Armed Forces.

Both Johnson and Foreign Secretary Dominic Raab have faced criticism over the UK’s response to the Taliban takeover.

From beginning to end the management of withdrawing from Afghanistan has been nothing but shambolic.

In 2001 many reporters suggested Afghanistan would become another Vietnam, how right they were even to the point of returning soldiers being let down by the politicians that sent them to war.

Johnsons statement comes in the week marking the 20th anniversary of the 11 September 2001 terror attacks in New York, Washington and Pennsylvania which prompted the US and its allies to go to war in Afghanistan.

The Prime Minister announced that Armed Forces charities will receive £5 million in additional funding to support those who have served, including those who may be struggling following recent events in Afghanistan.

The UK armed forces over the period consist of some 150,000 personnel. Johnson’s ‘doing right by our veterans’ equates to just £33.00 each. That poor amount is an insult but reading closely the £5 million is not designated for Afghan veterans only it is actually for the entire veteran community no matter where they served.

When you drill down it covers everything from Afghan refugees to signpost, its a real insult to our servicemen and women but more it’s just another really bad Tory public relations stunt with no substance.

Drilling down into the press release it says:

“The additional funding will be allocated to a range of projects that will increase capacity in mental health charities, improve veterans’ understanding of the support available and deliver enhanced social support. The Office for Veterans’ Affairs will allocate the funding over the coming months.

Funding will also enable veterans to continue helping the people of Afghanistan who have settled in the UK under the ARAP scheme, by providing social support, integration into local communities and help navigating life in the UK.

The Office for Veterans’ Affairs will commission charity provision of targeted and relevant support for Afghan refugees with military links and provide surge capacity to support transition to life in the UK.

The £5 million boost will also help increase the user friendliness and accessibility of services, better signposting veterans to the range of state and charitable services available to them. This will help to make mental health services even more accessible to the Afghanistan veteran cohort.” Read More

Again, it is yet another gross insult for veterans who suffered life-changing injuries, lost friends and comrades, many of who suffer from PTSD and mental trauma for a lifetime, the big question, again and again, is what for?

Mr Johnson confirmed that Afghans admitted to the UK under a separate refugee scheme will be allowed to stay indefinitely.

He added that the government would shortly be writing to local authorities with details of funding for accommodation and school places.

During the same parliamentary session, Jeremy Corbyn asks for enquiry into Afghanistan and the whole process of UK intervention in foreign wars.

The Veterans and Reserves Mental Health Programme is a Ministry of Defence (MoD) specialist service that provides mental health assessments and treatment advice for veterans and reservists.

It works closely with the NHS and DMS to provide appropriate treatment.

You can usually only access this service if a GP refers you to it. Ask your GP about a referral if you feel your time serving in the armed forces has affected your mental health.