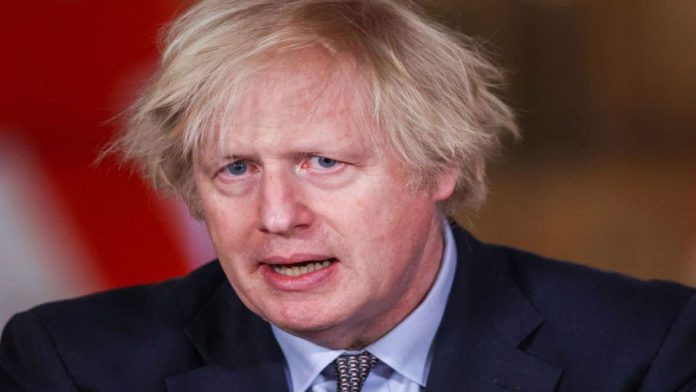 Boris Johnson is facing open warfare with members of his own party over plans to hike national insurance contributions (NI) of 25 million workers to raise £10bn for social care for the elderly.

The Government is planning to hike National Insurance (NI) contributions to pay for reforms to social care and tackle the huge backlog in the NHS caused by the coronavirus pandemic.

However, a split appears to have formed between senior Cabinet ministers over how much to raise NI by, with suggestions it could be as high as 2%.

Downing Street has not confirmed details of the announcement but a senior source said the government “will not duck the tough but necessary decisions needed to get the NHS back on its feet”.

Minister Nadhim Zahawi did not rule out raising taxes in order to fund social care.

Concern about breaking a manifesto pledge stretches into the cabinet, with other members of the government worried about taxing younger workers to subsidise the care and protect the homes of older people.

Labour’s on the fence.

Labour’s Jonathan Reynolds Shadow Secretary of State for Work and Pensions has not ruled out the possibility of Labour supporting a rise in the rate of National Insurance in order to fund the government’s plans for social care – but has warned that the party wants to see a “fair tax rise”.

In an interview with Sky News, the Shadow Work and Pensions Secretary discussed proposals expected to be unveiled by Boris Johnson next week, in which around 25 million people will pay more in the tax.

“The Prime Minister promised a plan for social care, we know that. He also made a manifesto commitment not to raise taxes. So, one of those was a lie from what we know so far,” Reynolds told viewers.

“Now, if the option is to raise National Insurance we’ve got to look at that, it’s a complicated area and I think people appreciate that. But there are real issues about how fair National Insurance would be as a way to raise the money – I don’t want to vote against more money for social care but I want that to be a fair tax rise,” Reynolds said.

“I also want to see the government talk about the workforce in social care. It’s the biggest sector that doesn’t get the living wage, there are huge problems and I don’t really think we can tackle this until we take seriously the terms and conditions of the people who work in social care.”

Pressed on whether the party would support the increase in National Insurance in parliament, the Shadow Work and Pensions Secretary told viewers it “wouldn’t be reasonable to rule anything out without knowing what the plan would be”.

According to The Telegraph, the government is set to announce a rise in National Insurance to fund social care reforms, likely capping the amount an individual will pay in care costs at between £60,000 and £80,000.

Former chancellor Philip Hammond on Sunday became the latest senior Tory to denounce the plan, warning it will provoke “a very significant backlash” causing serious damage to the Conservative Party.

Ex-prime minister Sir John Major has blasted the use of NI to pay for care as “regressive”, while former party leader Sir Iain Duncan Smith warned that Mr Johnson’s plans could turn the Tories into a “high-tax, high-spend party” without resolving the long-standing shortage of funds for care.

And cabinet minister Jacob Rees-Mogg sent a thinly-veiled warning to the PM about the danger of breaching his 2019 manifesto promise not to raise NI, income tax or VAT during this parliament.

Writing in the Sunday Express, the leader of the Commons recalled George Bush Sr’s broken “read my lips” promise not to raise taxes, adding: “Voters remembered these words after President Bush had forgotten them.”

Jacob Rees-Mogg wrote that “voters remembered those words after president Bush had forgotten them”.

The 1988 promise was broken by the former American leader and cited by many as a reason for his loss of the White House four years later.

Mr Rees-Mogg and trade secretary Liz Truss are believed to be among a number of cabinet ministers hostile to NI rises of 1 per cent or more expected to be announced this week alongside a new funding settlement to help the NHS with the estimated £10bn-a-year bill for dealing with the aftermath of the Covid crisis.

The row came as shadow cabinet minister Lisa Nandy indicated Labour was ready to consider a tax on wealth to help pay for social care, and the TUC called for a £17bn hike to capital gains tax to fill the funding gap.

Backing the “broad principle” that those with most should bear the greatest burden, Ms Nandy said this could mean that “those who make their money out of something other than income – out of assets – pay a bit more”.

Mr Johnson, Rishi Sunak and Sajid Javid were finalising details of the plan ahead of its expected launch in the coming week, and the chancellor will face the wrath of Tory MPs at a meeting of the backbench 1922 Committee on Monday evening.