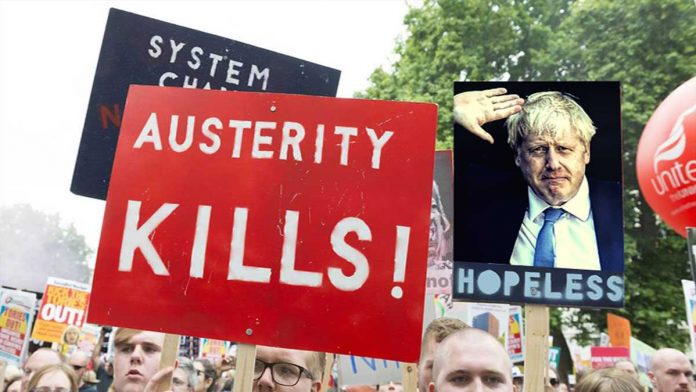 Austerity in England linked to more than 50,000 extra deaths in five years

Researchers looked at 2010-2015 when Tory and Lib-Dem cuts to NHS and social care were starting to bite.

Austerity cuts to the NHS, public health and social care have killed tens of thousands more people in England than expected, according to the largest study of its kind.

Research by the University of York analysed the joint impact of cuts to healthcare, public health and social care since 2010 found that even in just the following four years the spending squeeze was linked with 57,550 more deaths than would have been expected. The findings, worse than previously thought, were revealed in the journal BMJ Open.

Researchers also found that a slowdown in life expectancy improvement coincided with the government’s sharp cuts to health and social care funding after David Cameron came to power a decade ago.

“Restrictions on the growth in health and social care expenditure during ‘austerity’ have been associated with tens of thousands more deaths than would have been observed had pre-austerity expenditure growth been sustained,” said Prof Karl Claxton of the Centre for Health Economics at the University of York.

“Our results are consistent with the hypothesis that the slowdown in the rate of improvement in life expectancy in England and Wales since 2010 is attributable to spending constraints in the healthcare and social care sectors.”

In total, the study suggested the constraints on health and social care spending during this period of austerity have been associated with 57,550 more deaths up to 2014 than would have been expected if funding had stayed at pre-2010 levels.

The difference in expected lifespan between some of the wealthiest and poorest areas has more than doubled since the early 2000s, research finds

Research showed England’s richest people are living for a decade longer than the poorest, and the life expectancy gap between them has widened to “a growing chasm”, research has revealed.

The difference in expected lifespan between some of the wealthiest and poorest areas has more than doubled since the early 2000s, an analysis of official data by the King’s Fund shows.

“There is a growing chasm in health inequalities revealed by the data,” said Veena Raleigh, a fellow at the thinktank who specialises in the stark differentials in rich and poor people’s health.

“Our analysis shows that life expectancy has continued to increase in wealthier areas but has virtually stagnated in deprived areas in the north with the result that the gap in life expectancy between the richest and poorest parts of the country has grown by almost two-and-a-half years over the last two decades.”

Raleigh found the same pattern for women in the two places when she examined Office for National Statistics (ONS) data. While life expectancy shot up for women in Westminster from 82.3 to 87.1 years, among those in Blackpool it only edged up from 78.4 to 79 years, a rise of just 0.6 years. That means that the difference in expected lifespan more than doubled from 3.9 to 8.1 years.

Covid has exacerbated the north-south divide, as well as the “deprivation divide”, in life expectancy, Raleigh added. In 2001-03 the gap was widest – at 8.2 years – between Hart in Hampshire and Manchester. But it is now the 10.7-year differential between Westminster and Blackpool. Similarly, the biggest gap in female life expectancy has widened from 6.6 years to the 8.9-year differential between women in Kensington and Chelsea in London and Blackpool.

Separate research by Imperial College London, published in ‘The Lancet Public Health journal’, found life expectancy in many communities in England was falling even before the pandemic.

While life expectancy rose in most places during the first decade of the millennium, from 2010 in some areas it started to decline. By 2014 that deterioration had accelerated, researchers discovered, with life expectancy falling for women in almost one in five communities (18.7%), and for men in one in nine places (11.5%).

The worst-hit areas were typically in urban areas in the north. They include Blackpool, Leeds, Liverpool, Manchester and Newcastle.

Researchers have made various attempts at calculating the true impact of the austerity measures led by Cameron. But the University of York study is the first to jointly analyse the effect of the significant slowdown in NHS, public health and social care spending on death rates in England.

How and why did trends in life expectancy change after 2011?

Independent research by the King’s Fund showed much of the same.

2011 marked a turning point in long-term mortality trends, with improvements tailing off after decades of steady decline. In the 100 years to 2010–12, life expectancy increased by nearly 3 years every decade, but between 2011 and 2019 it increased by only 0.8 years for males and 0.6 years for females, having virtually flat-lined between 2014–18. However,  in 2019 life expectancy increased by 0.3 years in males and 0.4 years in females and in January–March 2020, before the Covid-19 pandemic took effect, mortality was again at the lower level seen in 2019. The life expectancy gains in 2019 and the fall in mortality in early 2020 were associated with mild influenza (flu) seasons and troughs in winter mortality.

One year deserves special mention – 2015, when life expectancy fell across virtually all of Europe. In England there were an estimated 28,000 deaths associated with flu and life expectancy fell by 0.2 years in both males and females – unprecedented for decades until the Covid-19 pandemic in 2020. As in Europe, most ‘excess’ deaths in 2015 occurred among older people, with deaths from respiratory disease (including flu and pneumonia) being a key contributor to the largest annual rise in deaths since the 1960s.

A review of mortality trends in England to 2017 found that improvements in life expectancy since 2010 had slowed in most areas of England and among all socio-economic groups, but the slowdown was greater among the most deprived groups and inequalities had widened. Slowing mortality improvements among people aged 50 years and over played a significant role.

The reasons for the post-2011 slowdown in life expectancy improvements are unclear and have been hotly debated.

While mortality has declined everywhere, there is a persistent north–south divide in life expectancy and healthy life expectancy, with people in southern regions on average living longer and with more years in good health than those living further north. For example, in 2017–19, life expectancy for males was about eight years lower and for females about seven years lower in Blackpool, Middlesbrough, Manchester and Liverpool than in Kensington and Chelsea, Camden, and Westminster. The gap in years lived in good health across local authorities in England was even greater, about 17 years.

About 14 per cent of the population of England is non-white. Life expectancy data is not yet available by ethnic group because ethnicity is not currently recorded at death registration but, following the disproportionate impact of Covid-19 on ethnic minority communities, the government has said it will be introduced in England (Scotland introduced it in 2012).

Boris Johnson last month pledged a £12bn-a-year cash injection to help the NHS catch up after the pandemic and to overhaul social care. Household budgets will take a hit from next April when employees’ national insurance contributions will rise by 1.25% to pay for the funding boost.

The Department of Health and Social Care has been approached for comment.

The Bankers’ are back, now we are just waiting for the next big crash