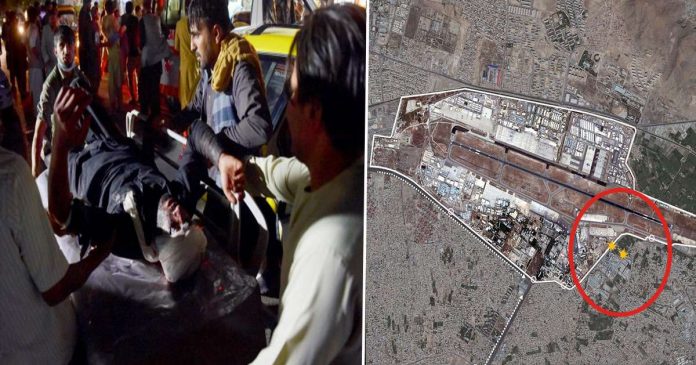 Early reports point to suicide bombings. They are believed to have carried out the attacks reportedly one within the confined corridor where thousands of people have been desperately waiting to be evacuated out of the country.

One explosion hit outside Hamid Karzai International Airport’s Abbey Gate, and another occurred outside the nearby Baron Hotel. The US embassy issued an alert, saying there had also been reports of gunfire.

A gunman also fired on one of the main entrances to Kabul’s international airport.

At least 13 civilians and multiple US Marines injured, with reports suggesting at least four have been killed.

An initial blast outside the airport’s Abbey Gate was the “result of a complex attack” that left a number of U.S. and civilian casualties, Pentagon spokesman John Kirby said on Twitter.

Three U.S. Marines were injured in that blast, according to three U.S. military officials.

Kirby added that there was “at least one other explosion at or near the Baron Hotel, a short distance from Abbey Gate.”

A second tweet confirmed US servicemen had been killed in the attack.

Statement on this morning’s attack at #HKIA: pic.twitter.com/Qb1DIAJQJU

While it was not immediately clear who was behind the explosion, two U.S. intelligence officials said the assumption is that the Islamic State group’s Afghan affiliate, ISIS-K, carried out an IED attack.

The explosions came hours after the United States and its allies had warned of a potential terror attack as thousands crowded the airport in a desperate effort to flee in the wake of the Taliban’s takeover.

Western countries had urged people to avoid travelling to the area, in the latest setback for the massive airlift out of Kabul, the Afghan capital.

On Twitter, a Taliban spokesman said the terror group that seized control of Afghanistan “strongly condemns the bombing of civilians at the Kabul airport,” while a Taliban official later told Turkey’s HaberTurk TV that “because of the presence of foreign forces that such attacks take place.”

Sewage canal where Afghans were vetted after their documents was packed with Afghans including women and children. A suicide attacker blew himself up in the middle of a large crowd. At least another attacker started shooting, multiple eye witnesses in the area&a friend tells me. pic.twitter.com/1MHuLOZnDl

“My thoughts are with all those affected and their loved ones. Our priority remains to evacuate as many people to safety as quickly as possible,” he said on Twitter after the explosions.

The twin blasts came after the US warned of a terror threat against the airport amid its ongoing evacuation and advised its citizens against travel to the airport. Intelligence warnings pointed towards Islamic State Khorasan (ISIS-K), but no group has yet claimed responsibility for the attacks nor have officials publicly attributed the incidents.

CNN reported that US President Joe Biden spent the morning in Washington monitoring events in the situation room with senior officials. A US military evacuation flight took off following the blast, CNN reported, suggesting operations at Kabul airport were continuing.

There were later reports of US soldiers sealing the gates of the airport.