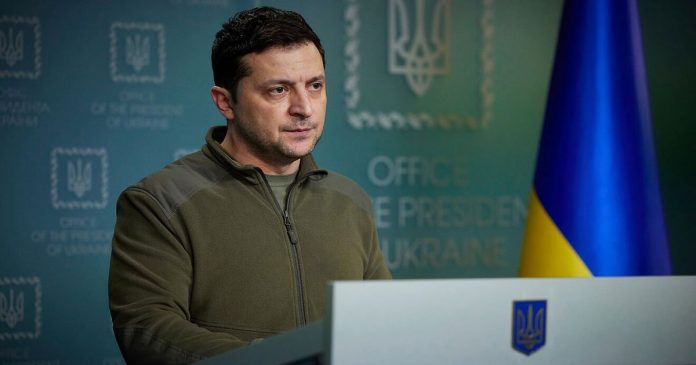 ‘We Understand That We Cannot Enter’: Zelenskyy Says NATO Doors Closed to Ukraine

Ukraine’s President Volodymyr Zelensky seems to have accepted that his country will not become a member of NATO, one of the demands made by Russia before it invaded.

Russia has demanded a guarantee that Kyiv does not join the alliance and Zelensky’s admission could be presented as a concession to Moscow that might pave the way to the end of the war.

However, Russian President Vladimir Putin’s other demands also include the “denazification” and “demilitarization” of Ukraine.

Russia’s leadership has said it views Ukraine’s ambition to join NATO a goal enshrined in the country’s constitution as a major security threat.

Russia has proposed a number of terms to impose on Ukraine in order to halt its “special military operation” in the country. Russia claims it would cease its military action in Ukraine if four conditions were met.

Ukraine once had neutrality within its constitution.

Ukraine officially adopted non-aligned status in 2010, thereby ruling out any future NATO membership bid. This neutrality was overturned four years later after the coup that overthrow Viktor Yanukovych in 2014, this came immediately after the democratically elected president had said NO to EU ascension, the starting point of this 8-year conflict and collective amnesia from the west, ironically the EU after leading Ukraine down the garden path have also shut the door claiming there is ‘No fast-tracking’ of EU membership.

It was always going to be a win, win for the west and its oligarchy

It seems Ukraine has been dramatically played and left abandoned by the west. However, the west has not walked away empty-handed. they have now committed billions upon billions in tax dollars to rearmament. Ukraine’s sacrifice has brought jobs for countries and profit for the industrial arms complex.

Nato budgets have been dramatically increased Germany has literally committed to rearm with a spend this year alone of over £100 billion on its armed forces. Biden just keeps signing those cheques, 2021 President Joe Biden signed into law a $777.7bn annual military budget, now it’s stated in 2022 another $773 billion was going to be available for the Department of Defense and other needs would go on top of that, potentially pushing a total above $800 billion.

Of course, Nato would have won whichever way this turned out, The elite creates a threat, no matter whether it’s the War on terror or the old enemy Russia, once they achieve manufactured consent subscriptions are paid in 2% of their GDP.

President Dwight D. Eisenhower in his speech “The Chance for Peace”, also known as the Cross of Iron speech, shortly after the death of Soviet dictator Joseph Stalin, warned of the industrial arms complex.

Eisenhower evoked William Jennings Bryan in describing “humanity hanging from a cross of iron.” Although Eisenhower, a former military man, spoke against increased military spending, the Cold War deepened during his administration and political pressures for increased military spending mounted. By the time he left office in 1961, he felt it necessary to warn of the military-industrial complex in his final address.

According to a translation of Zelensky’s comments made via video link to the meeting of the U.K. Joint Expeditionary Force (JEF) in London on Tuesday morning, Zelensky acknowledged that Ukraine’s accession to NATO would not happen.

“For years we’ve heard the opposite, open doors, However, it is not,” he said according to the Ukrainian news outlet, Trukha. “Our people understand this, and we are beginning to count on our own strength,”

He added. He also stepped up his criticism of Nato by questioning the alliance’s commitment to its Article 5 collective defence clause, after it did not send its troops to defend Ukraine against Russia. Zelensky suggested that Nato would react “in the same way” to one of its members being attacked by Russia.

Under Article 5 of NATO’s treaty, an attack on one member is an attack on all, and would bring into force the collective might of the 30-strong alliance.

Article 5 had never looked “as weak as it is today,” he said, as a result of Russian aggression having “hypnotised” Nato.

Previously, Nato dismissed such criticisms. Antony Blinken, US Secretary of State, said last week that the US has a “sacrosanct” commitment to the Article 5 guarantee of mutual defence between member states.

On Tuesday, Stoltenberg warned that Russia was laying the groundwork for further escalation in Ukraine by claiming the country is developing chemical weapons in biological labs.

“This is just another lie,” he said. “We are concerned that Moscow could stage a ‘false flag’ operation.”

However, as an independent commentator, I would be more concerned that Ukraine could raise a ‘false flag’ to bring in Western and NATO military aid, after all, it would benefit them much more than the Russians creating a false flag based on biological weapons.