War who is it good for?

On Friday the 13th of April or more precisely the early hours of Saturday morning a joint operation was carried out in response to the alleged chemical attack on Syrian civilians by the President of Syria Bashar al-Assad.

Although no concrete evidence was presented or due process carried out, OPCW experts were 24 hours away from taking samples from victims and site of alleged attack in Douma.
However the President of the United States after a series of confusing Twitter tweets suggesting he would or would not be bombing Syria finally made a live statement saying

“The nations of Britain, France, and the United States of America have marshalled their righteous power against barbarism and brutality,” US President Donald Trump said in an address from the White House at about 21:00 local time (01:00 GMT).

“The purpose of our actions tonight is to establish a strong deterrent against the production, spread, and use of chemical weapons,” he said.

The wave of strikes is the most significant attack against President Bashar al-Assad’s government by Western powers in seven years of Syria’s civil war.”

Both Macron and May followed Trump and carried out bombing raids.
We all know the rest, the argument of the joint action being legal or not, what was accomplished etc.

But the one thing we should all be aware of is that all actions have consequences and in this case the consequences have not stopped a civil war or created a negotiation stage for a ceasefire so that humanitarian aid can be administered to the battle worn civilian victims of this war.

No these consequences are the kind that the market like to see PROFITS and share hikes. All the major company’s the industrial arms complex got themselves a little added bonus,
seeing share prices rise.

War who is it good for? 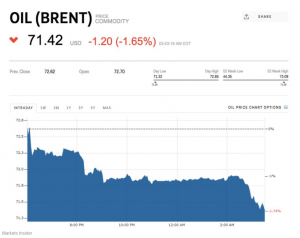 The price of oil fell sharply on Monday as traders started to see a decreased likelihood of further escalation between Western powers and Syria, following Friday night’s air strikes on the conflict-stricken nation.

A coalition of the USA, UK, and France led targeted strikes on bases in Syria on Friday evening. Some commentators expected more strikes may have been planned.

However, on Sunday, British foreign secretary Boris Johnson told the media that the UK has no current plans for more strikes, while President Trump tweeted over the weekend “Mission Accomplished!”

A lack of further action is a negative for oil prices. Traders reason that action in the region would disrupt oil production, creating a supply shortage, and pushing up prices. The lack of action removes this potential supply squeeze, driving up prices. 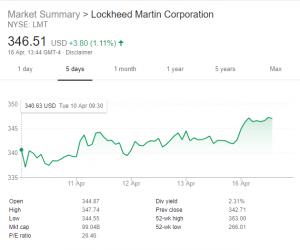 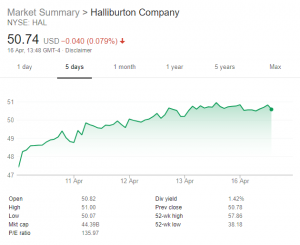 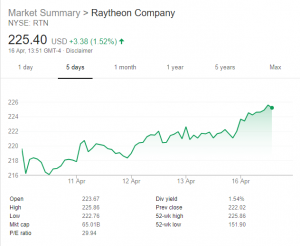