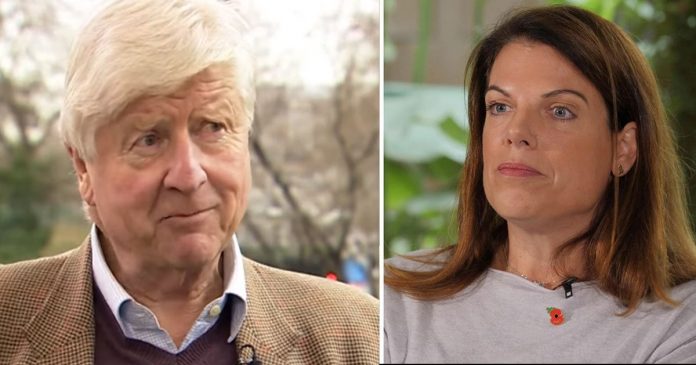 Stanley Johnson, the former MEP and father of the prime minister, has been accused of inappropriate touching two women

The two women, including a Conservative MP, have accused the prime minister’s father, Stanley Johnson, of touching them inappropriately.

Caroline Nokes told Sky News that Mr Johnson had smacked her “on the backside about as hard as he could” at the Tory Party conference in 2003.

And political correspondent Ailbhe Rea has accused Mr Johnson of groping her at the 2019 Conservative conference.

Ms Nokes, MP for Romsey and Southampton North since 2010, was the Conservative candidate when incident allegedly happened at the 2003 conference in Blackpool.

She told Sky News: “I can remember a really prominent man (Mr Johnson) – at the time the Conservative candidate for Teignbridge in Devon – smacking me on the backside about as hard as he could and going, ‘Oh, Romsey, you’ve got a lovely seat’.”

Downing Street repeatedly stonewalled questions today after a Tory MP accused Stanley Johnson of “smacking” her bottom and telling her “you’ve got a lovely seat”.

Waiving her right to anonymity, Nokes alleged during a panel discussion on Sky News: “I can remember a really prominent man, at the time the Conservative candidate for Teignbridge in Devon, smacking me on the backside about as hard as he could and going ‘oh Romsey, you’ve got a lovely seat’.”

Ms Nokes continued: “I would have been in my early 30s so old enough, old enough to call it out.”

She told the programme “I didn’t do anything, and I feel ashamed by that.”

The other MPs told her “you shouldn’t feel ashamed” and “you were just shocked in the moment”.

She said now it is an “absolute duty” to call it out as women shouldn’t have to put up with it, adding that it is necessary to be the “noisy, aggravating, aggressive woman in the room” because if a stand is not made then her daughter will be in the same position.

Stanley Johnson told Sky News that he didn’t remember Ms Nokes at all.

He said: ”I have no recollection of Caroline Nokes at all but there you go. And no reply… Hey ho, good luck and thanks.”

Caroline Nokes said the alleged incident happened at the Tory conference in 2003 when they were both Westminster candidates.

Mr Johnson said “no, no, no, no” and waved his hand when approached by a Sky News reporter, before saying he has “no recollection of Caroline Nokes at all”.

A New Statesman journalist, Ailbhe Rea, later tweeted a second allegation saying: “Stanley Johnson also groped me at a party at Conservative conference in 2019.” The Mirror has approached Mr Johnson for comment about both allegations.

Questioned repeatedly about the allegations, and whether Boris Johnson was concerned about them, the PM’s official spokesman refused to give any detail.

Boris Johnson’s official spokesman has refused to comment on “groping” claims against the Prime Minister’s father – saying he is a “private individual”.

When approached about his alleged behaviour, Mr Johnson said: “I have no recollection of Caroline Nokes at all – but there you go. And no reply… Hey ho, good luck and thanks.”

After these comments, Ms Rea tweeted: “Stanley Johnson also groped me at a party at Conservative conference in 2019.

“I am grateful to Caroline Nokes for calling out something that none of us should have to put up with, not least from the Prime Minister’s father.”

Ms Nokes has served as a minister for home affairs, work and pensions and in the Cabinet Office.

Mr Johnson, a former Member of the European Parliament, has never been elected as an MP.