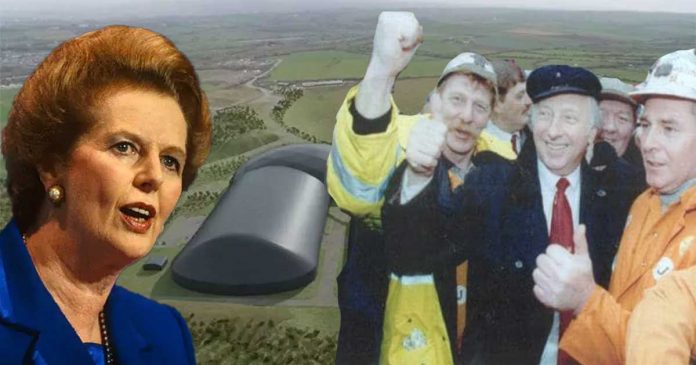 Many an old miner will be sat at home watching the news wondering when the world really did turn upside down, with not a single mention of the ideological decision to take on the miners for no other reason than to reduce the power of the unions. The Tories have gone and opened up a coal mine, we can only hope Thatcher is turning in her grave.

For all the weak-livered liberals who think that’s a bit hard, then I would point out that hard is what happened to my family and countless others in our former mining communities when the Tories carried out their ideological war on them in 1984.

A war that brought economic devastation to working-class communities, wrecking the prospects of young people for generations. There is no amount of investment that would ever come close to diminishing the deep-rooted hatred those former mining communities feel towards the Tories.

However, one cannot diminish the importance of the British coal industry over its 200-year lifespan neither can we ignore this once-in-a-generation opportunity to revitalise one of Cumbria’s poorest regions, creating thousands of jobs and boosting infrastructure in this often overlooked part of the old Labour Heartlands.

New technology has brought this once unattainable coal within reach and, in Cumbria, there is now much support for the idea it should be used to help the area.

This is a colossal 750 million ton seam under the Irish Sea that new technology has made attainable coal and, in Cumbria, there is now much support for the idea it should be used to help the area.

Michael Gove, the levelling-up secretary, gave the green light for the project on Wednesday, paving the way for an estimated investment of £165m that will create about 500 new jobs in the region and produce 2.8m tonnes of coking coal a year, largely for steelmaking.

Local Labour politicians are almost all united in their support, he adds. They feel let down that those in Westminster are not behind them. “The party is a broad church and everyone is entitled to an opinion,” he tells The Independent – but he adds that the disconnect may be why this area “is now the former Red Wall”.

The new mine would bring 500 well-paid jobs, WCM says. That, advocates reckon, would itself lead to another 2,000 in the supply chain. Investment in infrastructure would almost certainly follow, they say. In a ward, Whitehaven South, that has some of the most deprived areas of the region and an area, Copeland, where more than a quarter of all children live in poverty, according to the End Child Poverty campaign, such possibilities would be genuinely transformative.

Dr Lisa McKenzie puts it extremely well when she says: ” If the UK is to undergo a green industrial revolution, so the theory goes, it will require huge amounts of such steel. While low carbon methods for making this are beginning to be developed – notably in Scandinavia – they do not yet exist in a way that could be used to produce the sheer quantity currently required to build, for example, a wind farm. For now, coking coal remains a vital ingredient of the modern world’s infrastructure.

What are we going to do, ship it in from Germany or Poland?