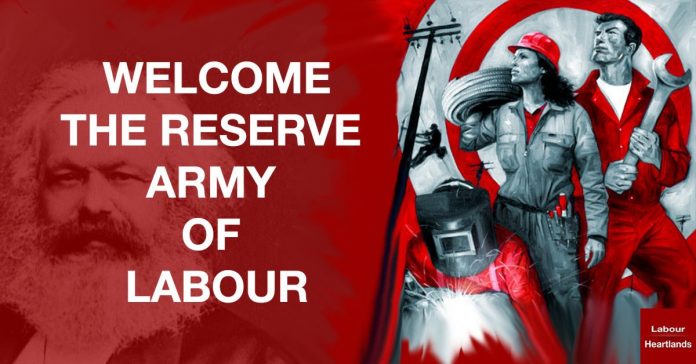 Both Germany and the UK will import Labour rather than invest in People.

Business leaders have long lobbied the governments of both countries to ease immigration legislation, arguing that parts of the economy are being stifled by a lack of workers and that the long-term effects could be irreversibly damaging.

In Germany the new law will also allow skilled immigrants to come to look for work, as long as they have an appropriate qualification, can speak adequate German, and are able to secure their own living while they search. Skilled immigrants will also be allowed to come to Germany to have their own qualifications approved and officially recognized by a German institution.

The German labour market are struggling to fill vacant posts in several key areas, including Nurses, care work, the IT sector, electricians, and specialist construction workers. Shortfalls are being exacerbated by an aging population and the fact that fewer people are coming from other EU countries, due to improved economic conditions at home.

The legislation will ensure it is easier for employers to bring workers in from outside the EU. About 1.2 million jobs remain empty in Germany, according to the Federal Labour Office

Germany currently has one of the easiest immigration laws for people with high education levels – “It’s easier to go to Germany than for example to Canada, under the current conditions,” said Liebig. “The German system right now is very much focused on formal qualifications, so if you have high qualifications and a corresponding job, then you can come – you don’t even have to speak German.”

Germany also even has a job-search visa for people with top-notch qualifications – so you could enter the country without an actual job, but can search for one. But what Germany is lacking is people with what are called medium-level qualifications: nurses, caregivers, kindergarten helpers, and skilled laborers such as electricians or carpenters: anything that requires a vocational qualification. This, according to Liebig, amounts to around 60 percent of the German labour market.

The government says lower-skilled and unskilled migrants will not routinely be able to come to the UK and settle permanently.

However, as a “transitional measure”, people from “low-risk countries” in Europe and further afield will be able to come to the UK, without a job offer, and seek work for up to a year.

The scheme is designed to fill vacancies in sectors such as construction and social care which are heavily dependent on EU labour and which ministers fear could struggle to adapt when free movement ends.

There will be a “cooling off period” after a year, meaning people will be expected to leave at that point and not to apply again for a further 12 months.

Ministers say applicants, who will have to pay a fee and not get access to public funds, will not be able to switch to any other migration scheme.

It is understood that the numbers being admitted this way would be “similar” to the 170,000 workers from outside the European Economic Area currently in low or unskilled roles.

The government said it reserved the right to tighten the criteria or impose numerical caps prior to a review in 2025 but campaigners for lower migration said the plans were “astonishing”.

Migration Watch said there was no way of making sure people left after a year and the immigration figures, which do not include people in the UK for less than a year, could be distorted as a result.

“It is shocking that the government should have caved in so completely to the demands of industry while ignoring the strong public desire to get immigration down,” said its chair Lord Green.

The chief winners will be business, as they exploit the bonanza of a huge new pool of labour from around the world while continuing to avoid their responsibility to the public to recruit and train up local talent.

When is our Government going to start investing in people or does it intend continuing to drain the resources and skilled workers of countries that have invested in people both in training and skills.

Will this cause resentment and feed the left behind who are not able to access the resources to up their skill level and compete in the job market.

But if a surplus labouring population is a necessary product of accumulation or of the development of wealth on a capitalist basis, this surplus-population becomes, conversely, the lever of capitalistic accumulation, nay, a condition of existence of the capitalist mode of production. It forms a disposable industrial reserve army, that belongs to capital quite as absolutely as if the latter had bred it at its own cost.

This also begs the question…

“If Germany is suffering the same labour shortages including ‘nurses and care staff’ when are we going to stop blaming Brexit for all our troubles?”

The only way forward is the proposed access to training and education the Labour Party advocate.

Towards a National Education Service

When it fails, it isn’t just the individual that is held back, but all of us. When we invest in people to develop their skills and capabilities, we all benefit from a stronger economy and society.

At a time when working lives and the skills our economy needs are changing rapidly, governments have the responsibility to make lifelong learning a reality by giving everyone the opportunity to access education throughout their lives.

To meet this responsibility, Labour will create a unified National Education Service (NES) for England to move towards cradle-to-grave learning that is free at the point of use. The NES will be built on the principle that ‘Every Child – and Adult Matters’ and will incorporate all forms of education, from early years through to adult education.

When the 1945 Labour government established the NHS, it created one of the central institutions of fairness of the 20th century. The NES will do the same for the 21st, giving people confidence and hope by making education a right, not a privilege, and building bridges where the Conservatives build barriers.

At a time when technology is changing demand for different kinds of skills, and evolving patterns of work mean that people are more likely to pursue several careers during their working lives, it is crucial that our education system enables people to upskill and retrain over their lifetimes. As part of our dynamic industrial strategy, lifelong training will deliver productivity and growth to the whole economy while transforming the lives of individuals and communities.

To ensure that we deliver for every part of the UK, we will devolve responsibility for skills, wherever there is an appetite, to city regions or devolved administrations.

Despite claiming to be committed to delivering high-quality training, the Conservatives have ruthlessly cut funding for FE colleges – our main provider of adult and vocational education – and reduced entitlements for adult learners. This has led to diminishing numbers of courses and students and plunged the sector into crisis.

Labour would introduce free, lifelong education in Further Education (FE) colleges, enabling everyone to upskill or retrain at any point in life.

Our skills and training sector has been held back by repeated reorganisation, which deprives providers, learners and employers of the consistency they need to assess quality. Labour would abandon Conservative plans to once again reinvent the wheel by building new technical colleges, redirecting the money to increase teacher numbers in the FE sector.

We share the broad aims of the Sainsbury Review but would ensure vocational routes incorporate the service sector as well as traditional manufacturing, working in tandem with our broad industrial strategy to deliver for the whole economy.

We will improve careers advice and open up a range of routes through, and back into, education, striking a balance between classroom and on-the-job training, to ensure students gain both technical and soft skills.

To implement the Sainsbury recommendations, we would correct historic neglect of the FE sector by giving the sector the investment – in teachers and facilities – it deserves to become a world-leading provider of adult and vocational education.

More specifically, we would:

After all the bluster: Brexit talks restart as Michel Barnier arrives in London

After all the bluster: Brexit talks restart as Michel Barnier arrives...