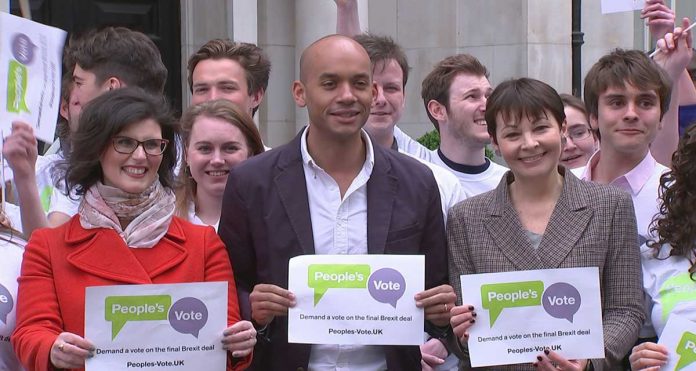 Despite voting Remain, CHELLEY RYAN does not find any of the main arguments for a ‘People’s Vote’ convincing, dealing with them one by one

OFTEN in politics we feel things on a deeply visceral level. It’s not unlike music, where a song either moves us to tears or leaves us cold.

And, like music, the same song will affect people differently — but in the case of political differences, families, friendships, communities and even, as in the case of Brexit or the referendum on Scottish independence, whole countries can be torn apart.

Our country will take a long time to heal from the divisions opened up by Brexit and the decisions politicians make now will play an integral role in whether we heal relatively quickly or go on to develop gangrene. We are at a terrifying crossroads and no-one with any sense of humility could declare with certainty, what will or even should happen next.

This is where we turn to our gut to guide us. And that’s not a bad place to start because, as I said earlier, politics is often a very visceral business.

Voters don’t just vote based on what their head tells them. They vote with their heart and their gut. A recognition of that fundamental truth is often missing in the campaign for a second referendum. Its biggest advocates appear to look at Brexit as a puzzle that only they are smart enough to solve.

Leave voters appear to be a mystery to them because they ignored the “common-sense” arguments made in the Remain campaign, and instead were driven to vote Leave by emotive arguments about taking back control.

People’s Vote campaigners sometimes are “good enough” to acknowledge there were valid reasons which drove people to vote Leave but then refuse to accept the validity of the result.

They blame Brexit on the Russians, Steve Bannon, Nigel Farage and lies on a big red bus and more latterly on Jeremy Corbyn, because he’s failed to wave a magic wand that puts an opposition leader into power just long enough to call a People’s Vote, which of course they are convinced Remain would win by a landslide.

There are perfectly understandable reasons why people want to undo Brexit and many People’s Vote campaigners want what’s best for our country in the future. It’s just I have yet to come across one who fully acknowledges the potentially catastrophic repercussions that could spring from such a vote.

And, yes, they may believe there will be catastrophic consequences if we don’t find a way to reverse Brexit, but that fear should be balanced with the fear of what happens if Brexit is reversed — and that’s a fear I’ve never seen adequately expressed or explored.

A key tenet of their argument runs something like this: “No-one voted to make themselves poorer, therefore Brexit doomsday scenarios give us a legitimate reason to try to overturn Brexit.”

I’m not sure I agree with this one and here’s why. Like others, I heard the warnings about loss of trade, emergency budgets and recessions during the first referendum campaign and heeded them, which is why I voted Remain. I have to assume therefore, that Leave voters heard the same warnings and voted to Leave regardless.

The fact that many of those scenarios didn’t immediately materialise, fuelling Leave voters’ scepticism about ongoing warnings, is neither here nor there. They were prepared to risk an economic hit to steer this country in a new direction.

“Remain is now ahead in the polls” is another argument often put forward.

But citing such polls, when most polls had Remain ahead before Leave won in 2016, strikes me as strangely optimistic.

Not to mention the inaccuracy of the polls leading up to the 2017 general election. But let’s suspend disbelief for a moment, and run with the idea polls are now as accurate as a quartz watch, are we to assume that lead is fixed and can’t be reversed when a Leave campaign goes full throttle into campaign mode?

For the last two years the Leave campaign has been in park mode, having won in 2016. In contrast, the Remain campaign has been throwing everything it has got into persuading election-weary Joe public we need to vote again.

Yet despite all their best and substantial efforts, they’ve only managed to muster a narrow poll lead. That does not bode well for a resounding Remain win and the last thing we need is a narrow Remain victory. Why? Because it will breed an ugly resentment, the likes of which this country may never recover from.

“People were lied to,” the Remainers say.

Well, yes, it was a campaign to secure votes, and unfortunately people lie in those. We know that from general election after general election. To suggest we should rerun a campaign because of lies is to suggest the public are naive enough to swallow them, hook, line and sinker.

Had that been the case, the outing of those lies would have given Remain a 20-plus point lead by now, instead of the narrow lead it’s taken them two years of hard campaigning against a snoozing opponent to achieve.

“It’s not undemocratic to have more democracy” is another claim.

This justification is my personal bug bear. If this is true, then it won’t be undemocratic to have another referendum after the next one and another one after that.

The first referendum was cited as a once-in-a-lifetime chance to significantly alter our country’s future. To then say: “Ah, but you didn’t know what kind of Brexit you were voting for back then,” just won’t wash.

People accepted a large degree of ambiguity over how we left the EU, but they definitely wanted out. That their decision was kicked back onto a playing field of mostly Remainer players has complicated matters, but it’s not for those players to kick that ball back to the people in the hope they’ll vote differently next time. It’s for those players to sort out how to deliver Brexit.

My personal gut feeling is Labour should never have adopted a People’s Vote option as our personal backstop.

Campaigning for a second referendum will be as toxic to our vote in key marginals in the north of England as campaigning with the Tories was during the Scottish independence referendum.

If a second referendum is called, we need it to be the Tories who call it and we as a party need to stay neutral, while allowing individual MPs to campaign as individuals.

As much as I respect the likes of Paul Mason, I think tweeting an excited “Boom!” in response to an interview which suggested Corbyn had moved a tad closer to favouring a second referendum, is the wrong tone to take.

If we ever refer to the prospect of a second referendum, we should do so somberly, regretfully, preferably with The Last Post playing in the background, because for millions of voters, the day such a referendum is called will be the day democracy died.

Labour needs to stick to the argument that it can negotiate a better deal, one that has a good chance of securing a parliamentary majority.

The complications and technical pitfalls of running a second referendum, such as which options are on the ballot, are for another article.

Suffice to say, it is not going to be the panacea to our current woes many hope it will be. In fact, there is a very real likelihood it will worsen them. And if supporting such a toxic referendum hurts Labour enough to keep us out of power, then all our woes just got a damn sight worse for a very long time.

Don’t split the left: an open letter from Unite members