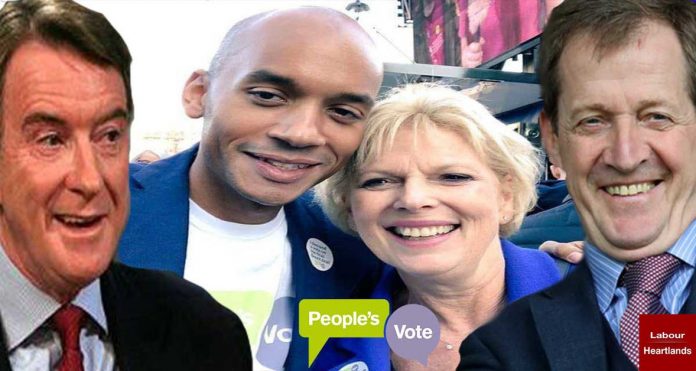 Pundits are pushing Jeremy Corbyn’s Labour Party to back a second Brexit referendum. They should be careful what they wish for.

Even the dogs in the street know Theresa May can’t get her Brexit deal through Parliament. But what should Labour’s position be in case of complete constitutional deadlock?

The position of Corbyn’s opposition party has attracted more attention than the position of the government. Little scrutiny is aimed at the sitting government as they tear their party to pieces. Centrist journalists and commentators Instead aim their criticisms entirely at the Labour Party.

Anything that goes wrong — the botched Universal Credit benefits system, for example — is down not to the government that created and implemented the failing system, but purely the fault of Corbyn’s shadow cabinet: If Labour were a “proper opposition” none of this would be happening, the claim goes; the blame for any crises lies squarely at the feet of Corbyn and McDonnell, runs the argument.

A considerable majority of the commentariat in Britain have entirely lost their critical faculties and can only write attacks on Corbyn and his front bench. Despite the government U-turning on the majority of their manifesto promises due to pressure from Labour, in centrists’ political fantasy, a less left-wing opposition would be performing far better.

Nowhere is this more obvious than in the arguments over a second referendum on the Brexit question. The main figureheads of the campaigning groups pushing for a second referendum are continuity Blairites: Alastair Campbell, Tony Blair’s former advisor, most famous for his role in compiling the discredited case for the Iraq war; Andrew Adonis, another former advisor to Blair, appointed a life peer during Blair’s reign; David Miliband, the more right-wing of Ralph Miliband’s sons, and a failed 2010 Labour leadership contender.

Backing a second referendum remains an extremely risky move for Labour, or any party that chooses such a path. Those campaigning in favor of a re-run remain convinced public attitudes have changed and that a second vote will come out strongly in favor of remaining in the European Union. Polling on public sentiment suggests the numbers are still extremely close and subject to margins of error that could swing either way. The original vote saw Leave at 52 percent and Remain at 48 percent; all polls now show that the majority of people haven’t changed their position in the two-and-a-half years since polling day, and any second vote is a huge risk.

First, the many reasons why people voted to leave the EU haven’t been addressed: the areas that voted to leave were often hit particularly hard by austerity and the ongoing deindustrialization of the UK: cuts have made these regions poorer, and any jobs that have replaced previously well-paid, secure working-class professions have tended to be insecure, low-paid, zero-hours contracts. For these people, threats that an EU exit will make the UK poorer are treated with skepticism: they’re already poor, and the status quo has seen their areas abandoned economically to the growth of the financial sector and the wealth of London and the southeast. Brexit voters have been characterized in the media as uneducated and ill-informed and this has hardened them against any swing to another position.

Secondly, a new referendum risks being seen as a great democratic betrayal — a rerun of the vote held solely because elites and the more well-off have decided that Leave voters made the wrong decision the first time. Rerunning the vote is likely to hand the far right a narrative that shady figures within Westminster and government seek to overturn a democratic mandate because it doesn’t fit their plans and ideology. For many Leave voters, the fact that the vast majority of parliamentarians, in the Conservative Party as well as Labour, are Remain voters and have been entrusted with shepherding Brexit through Parliament and negotiating the exit deal in Brussels has imbued them with a deep sense of mistrust at the entire process. A considerable number had tended not to vote in general and local elections but came out only for the referendum: many more people among the 28 percent of eligible voters who did not vote last time may come out this time and swing the margin further.

Thirdly, the number of staunch Conservative voters voting for Leave was tremendous: the Conservatives are in a peculiar position in that the majority of their voters backed Leave while most MPs back Remain, including the Prime Minister. They are unlikely to have changed their mind, and the small number of Conservatives arguing for Parliament to simply get on with leaving the EU will be supported more vociferously than a prime minister who calls for a second vote.

The campaigners for a so-called “People’s Vote” illustrate the problem most clearly: a cabal of almost entirely middle-class centrists detached from the groundswell of public opinion, preoccupied with obscure legal loopholes that supposedly might scupper attempts to push Brexit through Parliament or any process that sees the UK leave the EU at all. They function entirely as an echo chamber, with a record of excruciatingly embarrassing attempts at protest.

Such a gamble makes no sense and Labour would be wrong to back it. What makes far more sense is to call for a general election, as Labour has repeatedly done. Theresa May has lost the support of the Democratic Unionist Party; the ten Northern Irish MPs with whom she forged a “confidence and supply” deal last May do not have the numbers to make a true majority. Without those MPs, May cannot pass anything in Parliament without the help of Labour rebels. And considering that close to a hundred Conservative MPs have said they’ll rebel against her Brexit deal, it is increasingly clear that she has no democratic mandate whatsoever. Returning to Brussels to renegotiate, she would likely be told that the negotiators had no confidence in her passing anything they might offer.

Labour haven’t ruled out a second referendum entirely and if circumstances change considerably, such a vote could be on the cards. Those circumstances have yet to materialize, however. With the Conservatives at their weakest point in a lifetime, anyone on the Left should be both calling for and preparing for a general election — and hopefully a Corbyn government as a result.