Priti Patel, who will soon decide whether to extradite the WikiLeaks publisher, has links to a group that has attacked Assange in the media for a decade, Matt Kennard reports.

Priti Patel sat on the Henry Jackson Society’s (HJS) advisory council from around 2013-16, although the exact dates are unclear as neither the HJS nor Patel responded to Declassified’s requests for clarification.

She has also received funds from the HJS, and was paid £2,500 by the group to visit Washington in March 2013 to attend a “security” program in the U.S. Congress.

Patel, who became an MP in 2010 and was appointed home secretary in 2019, also hosted an HJS event in parliament soon after she returned from Washington.

After the U.K. Supreme Court said this month it was refusing to hear Assange’s appeal of a High Court decision against him, the WikiLeaks founder’s fate now lies in Patel’s hands. He faces life in prison in the U.S.

The Henry Jackson Society, which was founded in 2005 and does not disclose its funders, has links to the C.I.A., the intelligence agency behind the prosecution of Julian Assange and which reportedly developed plans to assassinate him.

One of the HJS’s international patrons is James Woolsey, C.I.A. director from 1993-95, who was in this role throughout the period Patel was advising the group. Woolsey’s affiliation to the Henry Jackson Society goes back to at least 2006, soon after it was founded.

In 2014, the group hosted General David Petraeus, C.I.A. director from 2011-12, at a U.K. Parliament meeting from which all media were barred.

Three years later, in 2017, the Henry Jackson Society organized another event at Parliament with General Michael Hayden, C.I.A. director from 2006-9, to “discuss the current state of the American Intelligence Community and its relationships with foreign partners.”

Hayden described “the relationship within the Five Eyes community as strong as ever, despite potential concerns over recent intelligence leaks between members.” Five Eyes is an intelligence alliance comprising Australia, Canada, New Zealand, the U.K. and the U.S.

During a visit to the U.K. in July 2020, then U.S. Secretary of State Mike Pompeo spoke at a roundtable hosted by the Henry Jackson Society with what the Washington Post referred to as a group of “hawkish” members of the Conservative Party.

As director of the C.I.A. in 2017, Pompeo had launched a blistering attack on WikiLeaks calling the media organization a “hostile intelligence service” that makes “common cause with dictators.”

Pompeo did not provide evidence but added a threat: “To give them the space to crush us with misappropriated secrets is a perversion of what our great Constitution stands for. It ends now.”

On the Henry Jackson Society advisory council at the same time as Patel was Lord James Arbuthnot, a former Conservative defence minister. His wife, Lady Emma Arbuthnot, was Westminster chief magistrate from 2016-2021.

For part of her tenure, she was in charge of the Assange case and made two key rulings against him in 2018. Lady Arbuthnot eventually stepped aside from ruling on the case because of a “perception of bias” but never declared a conflict of interest.

The links between Patel and Lord Arbuthnot go further. In 2010, soon after becoming an MP, Patel was appointed one of five parliamentary officers of the Conservative Friends of Israel when the group was chaired by Lord Arbuthnot.

The Conservative Friends of Israel has been described as “beyond doubt the most well-connected and probably the best funded of all Westminster lobbying groups.” It also does not disclose its funders.

Patel was forced to resign as secretary of state for international development in November 2017 after it was revealed that she had held more than a dozen undeclared meetings with Israeli ministers and organizations while on holiday in the country.

Many of these were arranged by the Conservative Friends of Israel’s honorary president, Lord Polak. Patel’s resignation letter accepted that her conduct “fell below…standards of transparency and openness.” 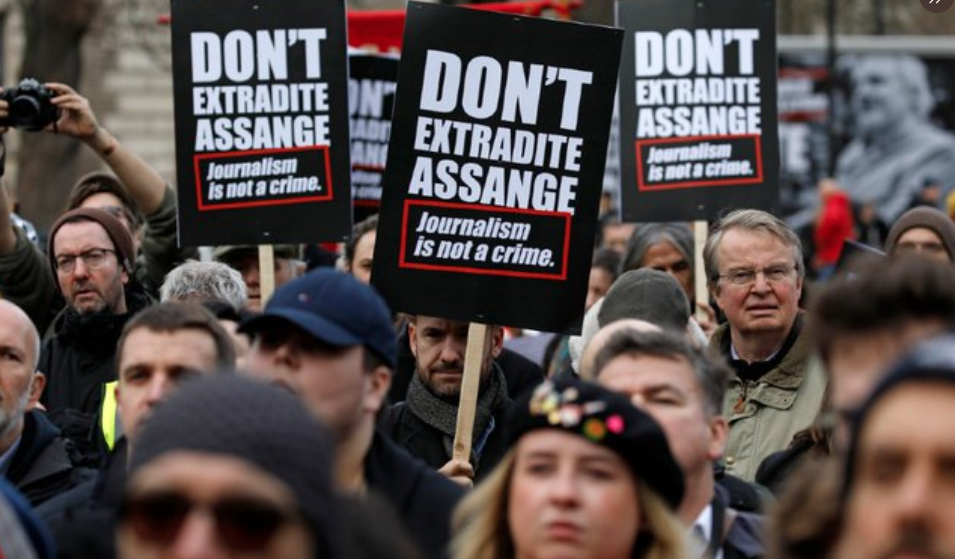 Assange supporters in London during the hearing of the U.S. appeal. (Don’t Extradite Assange Campaign)

HJS staff have been repeatedly critical of Assange and WikiLeaks in the British media since 2011 when its then associate director, Douglas Murray, engaged in a combative debate with Assange.

The following year, the Henry Jackson Society posted a video of Murray stating on media channel Al-Jazeera English: “There is not a witch-hunt of WikiLeaks. An organisation illegally obtained, or stole as we used to call it, a whole set of government documents and published them with consequences which are still not fully understood.”

Murray continued: “I think Mr. Assange has been bonkers and paranoid for years, it’s part of his alleged political makeup, and indeed I would allege that of many of his supporters.”

Over the following years, the Henry Jackson Society and its staff continued to be among the most active civil society voices for impugning the motives and reputation of Assange.

This stands in contrast to nearly all human rights and press freedom organizations which argue that extraditing the WikiLeaks publisher to the U.S. would be a grave blow to media freedom. 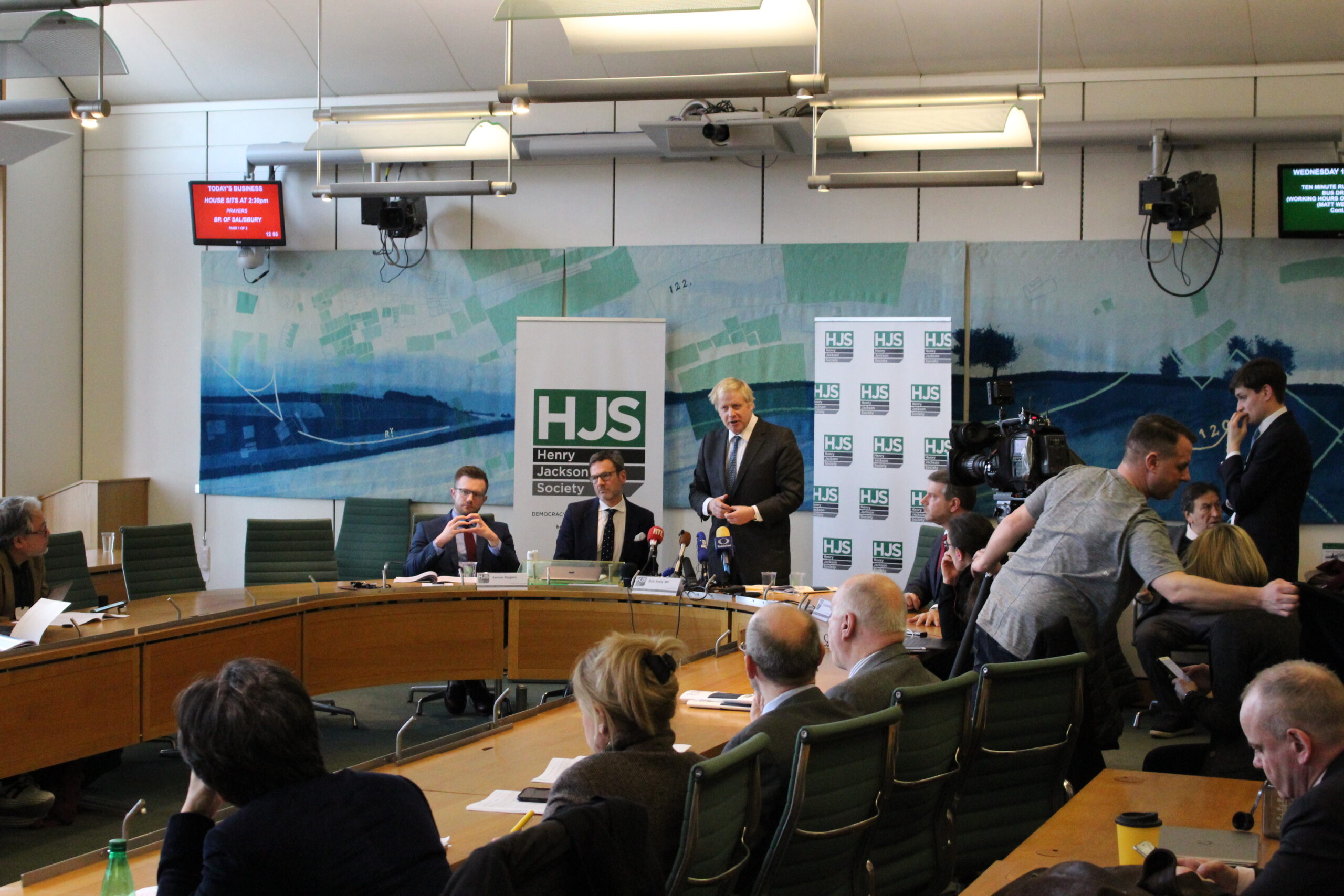 In October 2016, the Henry Jackson Society released a statement to the media, which claimed:

“Mr. Assange has a long track record of stealing and distributing information, peddling conspiracy theories, and casting aspersions on the moral standing of western democratic governments. He has done this whilst supporting, and being supported by, autocratic regimes.”

No evidence was supplied to support the assertions.

A number of other Henry Jackson Society staff — including spokesperson Sam Armstrong and then chief of staff Ellie Green — have made anti-Assange interventions in the British media.

In April 2019, after Julian Assange was seized from the Ecuadorian embassy in London by British police, Henry Jackson Society Executive Director Alan Mendoza was put up as the counterweight against Assange’s lawyer on BBC’s flagship Newsnight program.

Posted to the Henry Jackson Society’s Youtube channel, Mendoza told the national broadcaster: “Journalists are not allowed to break the law in obtaining their materials.”

He added: “I think it’s quite clear Mr. Assange has spent many years evading justice, hiding in a room in Knightsbridge … Isn’t it time he actually answered questions in a court of law?”

In October 2019, as home secretary, Patel visited Washington again to meet William Barr, the then U.S. attorney general who was in charge of the Assange case as head of the Department of Justice.

Together they signed the Cloud Act which made it easier for American and British law enforcement agencies to demand electronic data on targets as they undertake investigations.

Assange’s defense team had previously raised the concern in court that Barr may have used Assange’s extradition case in the U.K. for political ends. 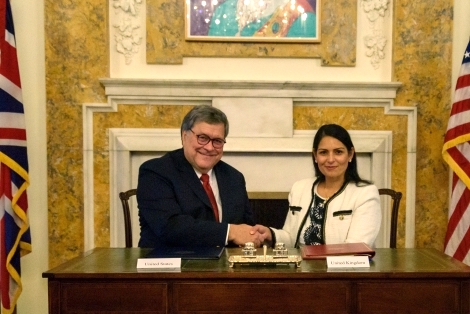 In August 2020, Declassified requested basic information about Patel’s 2019 trip to Washington. The Home Office confirmed it held the information but refused to release it because the department considered “that disclosure of some of the information would prejudice relations between the U.K. and the United States.”

In May 2020, Declassified also requested information about any calls or emails made or received by Patel since she became home secretary which concerned the case of Julian Assange, or mentioned his name.

The Home Office told us “we can neither confirm nor deny whether we hold the information you have requested” because “to do so either way would disclose information that constitutes the personal data of Julian Assange.”

The same request for Sajid Javid’s tenure as home secretary from 2018-19 was rejected because the department said “we have carried out a thorough search and we have established that the Home Office does not hold the information that you have requested.”

Declassified previously revealed that before signing the U.S. request, Javid had attended six secretive meetings, some attended by former C.I.A. directors, which were organized by a U.S. lobby group which has published calls for Assange to be assassinated or taken down.

The Home Office recently admitted it had eight officials working on Operation Pelican, the U.K. government campaign to seize Assange from the Ecuadorian embassy in London.

The department, however, claimed it did not know which other U.K. government ministries were involved in the operation.

Priti Patel and the Henry Jackson Society did not respond to requests for information and comment.

Matt Kennard is chief investigator at Declassified UK. He was a fellow and then director at the Centre for Investigative Journalism in London. Follow him on Twitter @kennardmatt

This article is from Declassified UK.