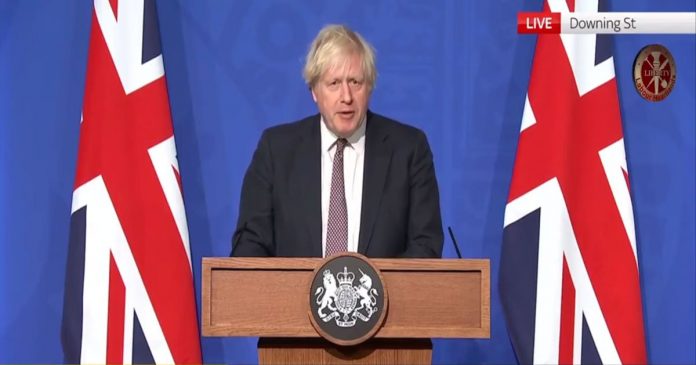 The government plans to offer booster vaccines to everyone over the age of 18 by the end of January, Boris Johnson has said.

Speaking at a Downing Street news briefing on Tuesday, the PM said the rollout of booster programme will go in age order, and that there will be more than 1,500 community pharmacy sites in England offering the jabs.

Mr Johnson said “temporary vaccine centres will be popping up like Christmas trees”, adding that some 400 military personnel and the “jabs army of volunteers” will also help with the rollout.

Health Secretary Sajid Javid announced the daily number of jabs has risen by a third since the start of this month.

It comes as scientists found more than a dozen cases of the strain with more than 30 mutations in the UK – and more cases expected to follow.

The number of confirmed cases of the variant in the UK rose to 14 this morning, after three more were confirmed in Scotland.

Sajid Javid says there will be no booster supply issues.

He said: “What we’re seeing recently has brought back memories of the strain of the last winter. But although we can’t say with certainty what lies ahead, we have one huge advantage that we didn’t have back then: our vaccination programme, which has already done so much to keep this virus at bay.

“But these defences will only keep us safe if we use them. This is a national mission and we all have a role to play.”

Asked why are people not being told to work from home? Boris Johnson replied: “this is not something the government thinks is necessary – it has a package of measures to deal with the Delta variant and they’ve been working.

He says the reason for not implementing Plan B – a contingency to protect the NHS which includes guidance to work from home – is in order to take an approach that is “proportionate and balanced”.

He will change things as necessary, but is looking for reassurance that vaccines are effective against Omicron.”

The PM added that the chance of another lockdown being enforced is “extremely unlikely”, but that ministers will keep “everything under review”.

Boris Johnson says he won’t demand masks are used ‘all over’ like they were in the third wave yet.

“We are trying to take a balance and a proportionate approach while we get to the bottom of the exact effect,” he said.

Mr Javid added: “We still don’t know enough about the varient and its spread.

Booster roll out a “national mission” to save Christmas

Johnson was asked if he agreed with Dr Jenny Harries, who urged people not to socialise if they do not need to in the run-up to Christmas, and was asked if Christmas parties should be cancelled.

He replied: “So the answer is no. The guidance remains the same, and we’re trying to take a balanced and proportionate approach.

“We’ve got the measures in place to fight Delta, which we think are appropriate, and then we’re bringing in some tougher measures to stop the rapid seeding of Omicron in this country to give us the time we need to get the boosters in and of course to find out more.”

He described the new measures as “the right balance”.

Health Secretary Sajid Javid says this is a “national mission” to save Christmas.

He added that people should get vaccinated to “give ourselves the best chance of a Christmas with our loved ones”.

Mr Javid told a press conference: “What we’re seeing recently has brought back memories of the strain of the last winter.

“But although we can’t say with certainty what lies ahead, we have one huge advantage that we didn’t have back then: our vaccination programme, which has already done so much to keep this virus at bay.

“But these defences will only keep us safe if we use them. This is a national mission and we all have a role to play.

“If we want to give ourselves the best chance of a Christmas with our loved ones, the best thing we can all do is step up, roll up our sleeves, and get protected when the time comes.”

Residents in Greece over the age of 60 will be fined €100 a month if they fail to get vaccinated against the coronavirus, under the first general COVID-19 mandate announced by the country’s government.

The measure was announced in response to a surge in cases and the emergence of the omicron variant. It will come into effect on Jan. 16 with the fines to be added to their tax bills, Prime Minister Kyriakos Mitsotakis said in a televised announcement Tuesday.

Greece’s death toll exceeded 18,000 this week with confirmed infections at record levels, as roughly a quarter of the country’s adult population remains unvaccinated.