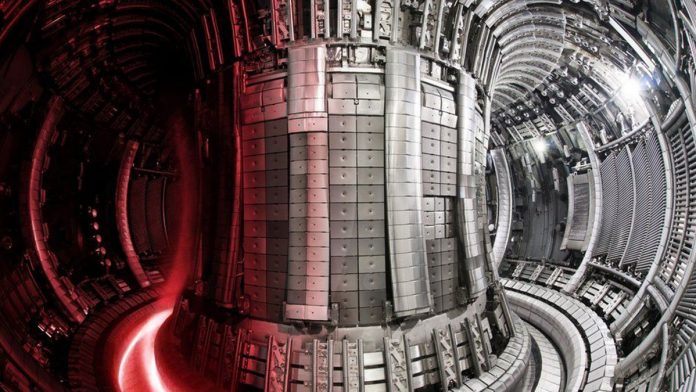 Scientists say they have made a major breakthrough in their quest to develop practical nuclear fusion – the energy process that powers the stars.

Nuclear Fusion, the process that powers the sun and stars, promises a near-limitless green electricity source for the long term. Pound for pound, it releases nearly four million times more energy than burning coal, oil or gas, and has the potential to deliver safe and sustainable low carbon energy over the coming decades.

The UK-based JET laboratory has smashed its own world record for the amount of energy it can extract by squeezing together two forms of hydrogen.

If nuclear fusion can be successfully recreated on Earth it holds out the potential of virtually unlimited supplies of low-carbon, low-radiation energy.

The experiments produced 59 megajoules of energy over five seconds (11 megawatts of power).

This is more than double what was achieved in similar tests back in 1997.

It’s not a massive energy output – only enough to boil about 60 kettles’ worth of water. But the significance is that it validates design choices that have been made for an even bigger fusion reactor now being constructed in France.

“The JET experiments put us a step closer to fusion power,” said Dr Joe Milnes, the head of operations at the reactor lab. “We’ve demonstrated that we can create a mini star inside of our machine and hold it there for five seconds and get high performance, which really takes us into a new realm.”

Ultimately, the process would be used to drive steam turbines to generate electricity.

Operating the power plants of the future based on fusion would produce no greenhouse gases and only very small amounts of short-lived radioactive waste.

Five sites in England and Scotland are in the final running to be the home of the UK’s prototype fusion energy plant.

The government is backing plans for the Spherical Tokamak for Energy Production (Step) with a final decision on its location expected at the end of 2022.

It would create thousands of jobs and aim to generate a “near-limitless” source of low-carbon energy, the UK Atomic Energy Authority (UKAEA) said.

The plant should be operational by the early 2040s, a spokesman said.

The five shortlisted sites are:

Fusion is one of the most promising options for generating the cleaner energy the world badly needs. CCFE scientists and engineers are developing the technology to bring fusion electricity to the grid.

Fusion – the process which goes on inside the sun – creates energy by forcing atoms together.

It is the opposite of standard nuclear reactors which rely on fission, breaking atoms apart.

Fusion is viewed as safe and clean but has so far proved difficult to harness.

Fusion is the process that takes place in the heart of stars and provides the power that drives the universe. When light nuclei fuse to form a heavier nucleus, they release bursts of energy. This is the opposite of nuclear fission – the reaction that is used in nuclear power stations today – in which energy is released when a nucleus splits apart to form smaller nuclei.

To produce energy from fusion here on Earth, a combination of hydrogen gases – deuterium and tritium – are heated to very high temperatures (over 100 million degrees Celsius). The gas becomes a plasma and the nuclei combine to form a helium nucleus and a neutron, with a tiny fraction of the mass converted into ‘fusion’ energy. A plasma with millions of these reactions every second can provide a huge amount of energy from very small amounts of fuel.

One way to control the intensely hot plasma is to use powerful magnets. The most advanced device for this is the ‘tokamak’, a Russian word for a ring-shaped magnetic chamber. CCFE’s goal is to develop fusion reactors using the tokamak concept. Read more…

Critics have said there are still huge hurdles to overcome and some experts believe existing, proven renewable technologies offer a more economical and timely way of tackling climate change.

George Freeman, minister for science, research and innovation, said: “Fusion energy has the potential to be a truly revolutionary and inexhaustible energy source that can help us reduce our dependence on unreliable fossil fuels and tackle climate change.

“By building the foundations to unlock the power of fusion energy, including the location of the UK’s first prototype fusion power plant, we are positioning the UK as a global leader in this safe and sustainable power source.”

“These experiments we’ve just completed had to work,” said JET CEO Prof Ian Chapman. “If they hadn’t then we’d have real concerns about whether ITER could meet its goals.

“This was high stakes and the fact that we achieved what we did was down to the brilliance of people and their trust in the scientific endeavour,” he told BBC News.

Fusion works on the principle that energy can be released by forcing together atomic nuclei rather than by splitting them, as in the case of the fission reactions that drive existing nuclear power stations.

No materials exist that can withstand direct contact with such heat. So, to achieve fusion in a lab, scientists have devised a solution in which a super-heated gas, or plasma, is held inside a doughnut-shaped magnetic field.

The Joint European Torus (JET), sited at Culham in Oxfordshire, has been pioneering this fusion approach for nearly 40 years. And for the past 10 years, it has been configured to replicate the anticipated ITER set-up.

The French lab’s preferred “fuel” to make the plasma will be a mix of two forms, or isotopes, of hydrogen called deuterium and tritium.

JET was asked to demonstrate a lining for the 80-cubic-metre toroidal vessel enclosing the magnetic field that would work efficiently with these isotopes.

For its record-breaking experiments in 1997, JET had used carbon, but carbon absorbs tritium, which is radioactive. So for the latest tests, new walls for the vessel were constructed out of the metals beryllium and tungsten. These are 10 times less absorbent.

The JET science team then had to tune their plasma to work effectively in this new environment.

“This is a stunning result because they managed to demonstrate the greatest amount of energy output from the fusion reactions of any device in history,” commented Dr Arthur Turrell, the author of The Star Builders: Nuclear Fusion And The Race To Power The Planet.

“It’s a landmark because they demonstrated stability of the plasma over five seconds. That doesn’t sound very long, but on a nuclear timescale, it’s a very, very long time indeed. And it’s very easy then to go from five seconds to five minutes, or five hours, or even longer.”

JET can’t actually run any longer because its copper electromagnets get too hot. For ITER, internally cooled superconducting magnets will be used.

Fusion reactions in the lab famously consume more energy to initiate than they can output. At Jet, two 500 megawatt flywheels are used to run the experiments.

But there is solid evidence that this deficit can be overcome in the future as the plasmas are scaled up. ITER’s toroidal vessel volume will be 10 times that of JET. It’s hoped the French lab will get to breakeven. The commercial power plants that come after should then show a net gain that could be fed into electricity grids.

This is a long game and it’s significant that of the 300 or so scientists working as JET, a quarter are in the early part of their careers. They will have to carry the baton of research forward.

“Fusion takes a long time, it is complex, it is difficult,” said Dr Athina Kappatou, who’s in her thirties. “This is why we have to ensure that from one generation to the next, there are the scientists, there are the engineers and the technical staff who can take things forward.”

“It is clear significant changes are needed to address the effects of climate change, and fusion energy has huge potential. JET has inspired and driven physicists and engineers across the world to build invaluable knowledge and develop ground-breaking new technology through a staggering 100,000 live pulses. It is truly one of a kind, the best there has been, and will be remembered long into the future.”

Ukraine Crisis: US oil giants give a master class in war profiteering

Greenwashing: European Commission declares nuclear and gas to be green