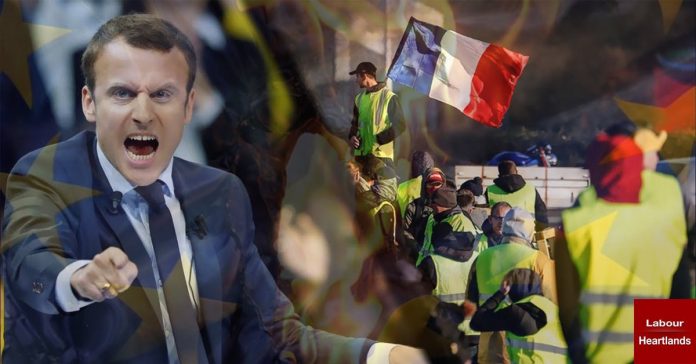 Santa Claus came early for millions of French people on Monday. But will it break EU Budget rules?

President Emmanuel Macron’s efforts to buy off a nationwide protest movement with much needed measures for low-paid workers and retirees is likely to come at a cost — inflating the budget deficit, pushing the national debt over 100 percent of gross domestic product and reneging on EU commitments to fiscal discipline.

EU Budget rules are yet another reason to leave the EU, it is extremely unlikely Labours ambitious spending plans would ever meet the stringent requirements of the EU.

Brussels has insisted it would sanction Italy if its budget doesn’t meet European Union spending rules, focusing on the proposed deficit level of 2.4 percent.

European Union’s obsession with austerity: Greece. EU austerity measures, forced on the Greek people against their democratic will, have decimated the lives of millions in the country. This frenzied commitment to austerity is largely driven by the EU’s demand that all countries must keep their budget deficits at or below 3% of GDP. Even when research asserts that austerity is not the answer, as an International Monetary Fund paper did last year, the EU’s commitment to its austerity agenda remains unshaken. And yet you would struggle to find any allusion to this key contradiction in any of the mainstream discourse around the stance of left-leaning Remainers.

The question that needs to be asked is how can anti-austerity, anti-Conservative voters support an organisation with such an inauspicious track record on austerity? An organisation that will, when the next financial crisis strikes, impose austerity measures on countries at a far higher order of magnitude than we here in the UK have experienced?

But, of course, this question is never asked. In public discourse, left-leaning voters want to remain in the EU because they support free-movement and protection of workers’ rights and the debate ends there. The intricacies and contradictions of this stance are rarely, if ever, addressed, contributing to the disorientation and lack of clarity that has characterised the whole Brexit debate.

Too little too late!

French President Emmanuel Macron’s measures to help low-income families and so end the “yellow vest” protests will blow a hole in the budget and perhaps his reputation too, analysts say.

The 40-year-old leader came to power in May 2017 promising a new business-friendly France with healthy public accounts, ending the chronic deficits which have been the norm since the 1970s.

But economists estimate the cost of the sweeteners he announced in an address to the nation on Monday could reach 11 billion euros ($12.5 billion) —

a blowout for a country already struggling to meet EU budget rules.

“The European Commission will closely monitor the impact of the announcements made by President Macron on the French deficit and any financing arrangements,” Moscovici told AFP.

“We are in constant contact with the French authorities,” added Moscovici, who was attending a plenary session of European Parliament in Strasbourg.

Meeting the EU’s three percent deficit limit has been a centrepiece of Macron’s European strategy in order to win the trust of powerful Berlin and its backing for EU reforms.

The EU rules on public spending are “binding for everybody that is clear,” said senior German MEP Manfred Weber, when asked by reporters about France’s new expenditure.

Because of those very same rules, Italy faces the prospect of the European Commission launching against it an excessive deficit procedure (EDP) based on Rome’s exorbitant public debt. The country’s populist government had announced that it would be increasing the budget deficit to 2.4 percent of GDP to fund election promises such as a basic income for all and a pensions overhaul.

France’s budget deficit could defy the very same rules. As the EU pressures Italy to retreat from a deficit of 2.4 percent of GDP next year

Europe’s best friend, Emmanuel Macron, handed Italian populists a helping hand by announcing a spending spree of his own.

During a 13-minute televised address to the nation on Monday night, the French president promised a minimum wage increase and tax cuts, including for low-income pensioners, in an attempt to appease the Yellow Jacket protesters. The announced measures could push France’s budget-deficit-to-GDP ratio to 3.5 percent, well over the EU’s 3 percent ceiling, according to an anonymous government source quoted by French daily Les Echos.

While investors are starting to look more closely at French spending, Italy has periodically complained that Paris gets special treatment when the EU Commission is assessing budgets.

“Macron’s spending will encourage Salvini and Di Maio,” said Giovanni Orsina, head of the School of Government at Rome’s Luiss-Guido Carli University. “Macron was supposed to be the spearhead of pro-European forces, if he himself is forced to challenge EU rules, Salvini and Di Maio will jump on that to push their contention that those rules are wrong.”

What Our Economists Say…

“The fiscal loosening shows that France’s embattled president is more worried about yellow vests in Paris than gray suits in Brussels, whose fiscal rules are being broken. The danger is that the protests continue anyway because too much of the giveaway is targeted on pensioners and not enough on those in work.”