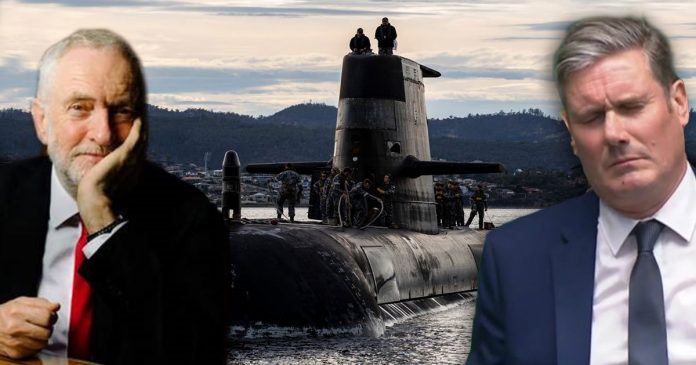 “AUKUS is the next step in a new cold war with China,” said one opponent of the trilateral agreement. “It makes the Indo-Pacific, and the world, a more dangerous, not a more stable, place.”

Echoing concerns raised by international activists over the perils posed by the three-nation AUKUS agreement, delegates at the U.K. Labour Conference on Monday voted to condemn the new military pact between Australia, the United Kingdom, and the United States as a threat to world peace.

Labour leader Sir Keir Starmer, who backed the military partnership earlier this month and said “Britain must look after our most important relationships”.

It seems more of the party are willing to listen to the former Labour leader Jeremy Corbyn when it comes to issues of war and peace. Corbyn claimed the pact was “starting a new nuclear arms race and cold war” and said members should “keep speaking out against it”.

We must keep speaking out against it. pic.twitter.com/VfEcCnWJ5R

“I want to live in a peaceful world. And if we’ve got differences with people, as we have on human rights, then challenge… then support those in those societies that are demanding their rights.” —Jeremy Corbyn, Labour MP

Labour Party members voted 70.35% to 29.65% on the motion condemning AUKUS during the Brighton conference, according to The Independent. The Labour delegates join global peace advocates and nations including China—whom critics say the pact seeks to contain—in denouncing the agreement.

The conference vote was immediately condemned by the GMB union, which warned opposition to the new military agreement “undermines industries where jobs are under threat”.

Under the terms of the Aukus pact, the three allies have agreed to co-operate on the development for the first time of a fleet of nuclear-powered submarines for the Australian navy.

Boris Johnson’s claim that AUKUS will “promote stability” in the Indo-Pacific region, the motion stated that “this is a dangerous move which will undermine world peace,” and that the conference “resolves to oppose the AUKUS agreement and make appropriate moves to de-escalate the situation.”

The Guardian called the motion “an embarrassment” for Labour Leader Keir Starmer, who recently told Parliament that the party “welcomes” the “increased cooperation” with Britain’s allies.

In a further embarrassment, the motion’s results were announced shortly after John Healey, the shadow secretary of state for defense, declared that “Britain will be democracy’s most reliable ally,” and that the country “will no longer be half-hearted about essential alliances and treaties.”

Carol Turner of the Labour Campaign for Nuclear Disarmament wrote last week that “far from promoting stability in the Indo-Pacific, AUKUS will generate greater military tension that could contribute to another round of nuclear proliferation.”

“AUKUS is the next step in a new cold war with China,” she added. “It makes the Indo-Pacific, and the world, a more dangerous, not a more stable, place.”