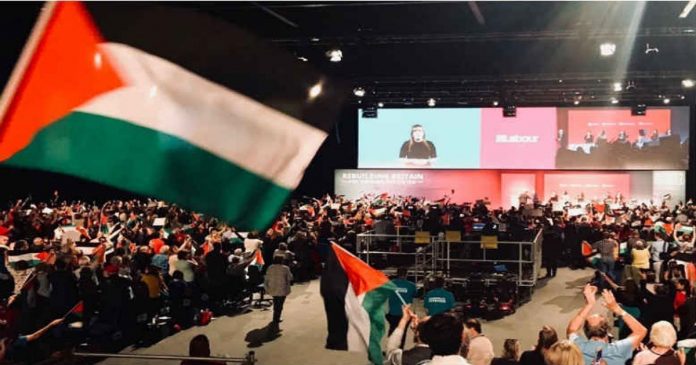 The motion, not backed by the leadership, recognised that Israel has implemented an apartheid system and demanded an end to the UK arms trade with Israel.

At the end of the Labour Party morning session of conference, delegates passed by a show of hands a composite on Israel and Palestine, despite Steve McCabe MP, the chair of Labour Friends of Israel, urging them not to on the grounds that the motion was “too shouty, too angry, too one-sided and not at all focused on the search for peace”.

McCabe claimed the composite was “completely hostile to the people of Israel” and ignored the actions of the new coalition government in Israel. “If Labour had adopted this approach in Northern Ireland, we would never have got to the Good Friday agreement,” he claimed.

But the truth is if the world did not adopt sanctions on South Africa it would not have stopped apartheid.

The motion points to recent human rights reports showing “unequivocally” that Israel has committed the UN-recognised crime of apartheid as evidenced by Israeli rights organisation B’tselem and Human Rights Watch.

The motion supports Palestinian civil society calls for “effective measures” against the building of settlements, demands the end to the occupation of the West Bank and the blockade of Gaza, and supports the right of Palestinians to return to their homes.

Together with the de facto annexation of Palestinian land by accelerated settlement building and statements of Israel’s intention to proceed with annexation, it is ever clearer that Israel is intent on eliminating any prospects of Palestinian self-determination.

Conference notes the TUC 2020 Congress motion describing such settlement building and annexation as ‘another significant step’ towards the UN Crime of Apartheid, and calling on the European & international trade union movement to join the international campaign to stop annexation and end apartheid.

Conference also notes the unequivocal 2021 reports by by B’Tselem and Human Rights Watch that conclude unequivocally that Israel is practising the crime of apartheid as defined by the UN.

Conference welcomes the International Criminal Court decision to hold an inquiry into abuses committed in the Occupied Palestinian Territories since 2014.

Conference resolves that action is needed now due to Israel’s continuing illegal actions and that Labour should adhere to an ethical policy on all UK trade with Israel, including stopping any arms trade used to violate Palestinian human rights and trade with illegal Israeli settlements.

Conference resolves to support “effective measures” including sanctions, as called for by Palestinian civil society, against actions by the Israeli government that are illegal according to international law; in particular to ensure that Israel stops the building of settlements, reverses any annexation, ends the occupation of the West Bank, the blockade of Gaza, brings down the Wall and respects the right of Palestinian people, as enshrined in international law, to return to their homes.

Conference resolves that the Labour Party must stand on the right side of history and abide by these resolutions in its policy, communications and political strategy.