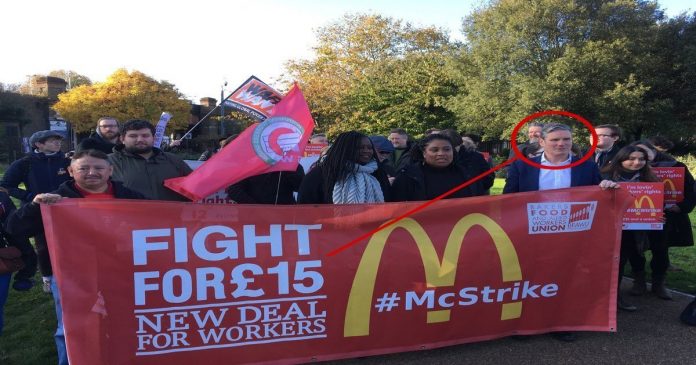 Sir Keir Starmer will face a fresh battle with Labour members over the campigne for minimum wage.

Sir Keir Starmer is at the centre of a row over left-wing demands for Labour to back increasing the minimum wage to £15 an hour.

Labour’s conference is expected to pass a motion later calling for this to be party policy.

Frontbencher Andy McDonald resigned on Monday, saying the leadership had ordered him to argue against the rise, making his position “untenable”.

The leadership is keen to avoid an open row on the issue.

It says it will not encourage members to back or reject the motion, which, if it passes, will not automatically become Labour policy.

Labour adopted the campaign for a £10 an hour minimum wage after ‘The Bakers, Food and Allied Workers Union’ (BFAWU) first pushed the initiative way back in 2015 when they said that the “minimum wage should be increased to £10 per hour so that working people do not have to be supported with benefits”.

6 years on with no early election insight and small details such as the Budget of 2020 when Chancellor of the Exchequer Rishi Sunak announced (11 March 2020) that the UK government plans to raise the national living wage to £10.50, which by then with the rising cost of living will not nearly be enough. This makes Labour’s £10 an hour argument a little redundant. It makes sense that Labour should argue for a real living wage of £15 an hour.

Instead, Starmer allegedly ordered Andy McDonald to argue against a £15 minimum wage. The former Shadow Secretary of State for Employment Rights and Protections explained that he “wanted to fight for the working people of this country” but “cannot do this as a member of the shadow cabinet”, because he was instructed by Starmer’s office to argue against a £15 minimum wage and statutory sick pay at the living wage in a conference meeting.

In his resignation letter, he told Sir Keir: “After 18 months of your leadership, our movement is more divided than ever and the pledges that you made to the membership are not being honoured.”

Sir Keir responded: “My focus and that of the whole party is on winning the next general election so we can deliver for working people who need a Labour government.”

Former Labour leader Mr Corbyn said he hoped the £15 minimum wage call would be backed by the party.

Ironically Starmer had stood alongside McStrikers calling for £15 an hour and a video in which he described that wage as part of “the basics”.

It is with deep sadness that I have resigned from Keir Starmer’s Shadow Cabinet, following the leadership’s refusal to back a £15 minimum wage and statutory sick pay at the living wage. pic.twitter.com/dz1KQTj0qR

CWU leader Dave Ward said: “Andy McDonald was the first MP to grasp the CWUs call for a new deal for workers in the UK. He knows that the balance of forces in society has to change and he knows key workers deserve a minimum wage of £15 an hour. We stand with him.”

The Unite union is putting the motion, calling for the minimum wage to increase to £15, to a vote on Tuesday.

The wide-ranging Unite motion also says that, for Labour to win the next election, it “must be an anti-austerity party, defending jobs and improving living standards”.

It includes demands for stronger union rights, higher taxes “on the very wealthiest”, an end to zero-hour contracts and a “better work-life balance”.

#Labourleaks have shown how low the once honest working-class Party has sunk: Report leak was whistleblowing on a corrupt regime.