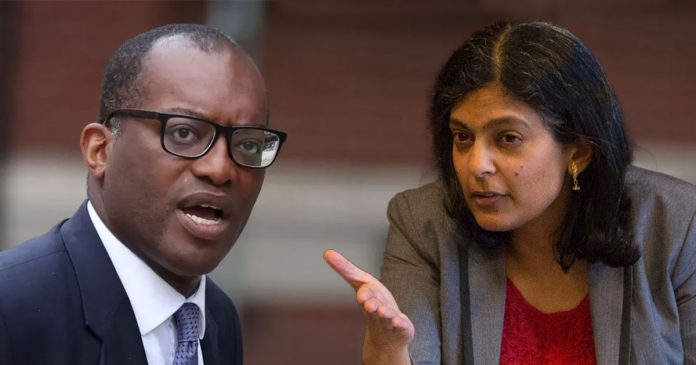 ‘You wouldn’t know he is black’

Labour MP Rupa Huq has been suspended from the Party after she was accused of making “racist” comments about the chancellor.

The MP for Ealing Central and Acton made the remarks about the UK’s first black chancellor at a Labour conference fringe event on Monday entitled “What’s Next for Labour’s Agenda on Race?”

The audio clip was published by the Guido Fawkes website minutes before Sir Keir Starmer began his speech to the Labour Party Conference in Liverpool.

During a Q&A session, she said: “He’s superficial, he’s, a black man but again he’s got more in common… he went to Eton, he went to a very expensive prep school, all the way through top schools in the country.

“If you hear him on the Today programme you wouldn’t know he’s black.”

Following the publication of the clip, Ms Huq tweeted: “I have today contacted Kwasi Kwarteng to offer my sincere and heartfelt apologies for the comments I made at yesterday’s Labour conference fringe meeting.

“My comments were ill-judged and I wholeheartedly apologise to anyone affected.”

Rupa Huq was administratively suspended pending an investigation after the remarks about Kwasi Kwarteng were made public.

After her suspension, Ms Huq apologised for her “ill-judged” comments.

“I have today contacted Kwasi Kwarteng to offer my sincere and heartfelt apologies for the comments I made at yesterday’s Labour conference fringe meeting,” she posted on social media.

“My comments were ill-judged and I wholeheartedly apologise to anyone affected.”

Speaking to the BBC’s Politics Live programme, she said Ms Huq should apologise, while the party’s foreign affairs spokesman David Lammy described the remarks as “unfortunate” adding: “I wouldn’t have made them myself.”

Labour said: “We condemn the remarks and urge her to withdraw them and apologise.”

Former chancellor and Tory MP Sajid Javid said he was “appalled and saddened” by the clip adding: “Rather than give encouragement to racists and people who seek to divide us, she should know better. Not too late for her to show that she does.”

In a letter to Sir Keir, Mr Berry urged the Labour leader to “join me in unequivocally condemning these comments as nothing less than racist”.

Keir Starmer must act over Rupa Huq’s digusting comments at #LPC22 about the Chancellor.

“Superficially he is a black man” because he’s Conservative is a vile thing to say. pic.twitter.com/DtVwYSNN6N

The Conservative Party chair also labelled her words as “vile” and “disgusting”.

Sunder Katwala, who chaired the event at which Ms Huq made the remarks, tweeted: “My comments from the chair that people should be judged on their politics and ideas, not race, and that Kwarteng being a Conservative did not mean he was not Black, were strongly applauded by the fringe audience.”

Labour MP Rupa Huq has contacted Kwasi Kwarteng to apologise for her clumsy and prejudiced comments at the fringe meeting which I chaired yesterday. The Labour Party has withdrawn the whip, pending investigation. https://t.co/3JMGjkA94b

Does Labour have a racisim problem?

Labour supporters are still reeling from the racism shown in the #LabourLeaks dossier and the subsequent Forde report that followed.

Diane Abbott recently called on the Labour leader, Sir Keir Starmer, to take action over racism in the party in the wake of the Forde inquiry.

The Forde report, published in July, condemned remarks made about Abbott, the MP for Hackney North and Stoke Newington, in leaked WhatsApp messages made by Labour officials.

The report by Martin Forde QC found that some of the attitudes expressed towards Abbott and other Bame MPs in private WhatsApp messages among staffers hostile to Jeremy Corbyn represented “overt and underlying racism and sexism”.

Abbott said she had received no apology for the comments, which Forde said used “expressions of visceral disgust, drawing (consciously or otherwise) on racist tropes, and they bear little resemblance to the criticisms of white male MPs elsewhere in the messages”.

Abbott said: “In a private sector organisation people who were as blatantly racist as this would be disciplined, if not sacked. Instead, Starmer commissioned the Forde report and deliberately sat on it for two years hoping people would forget.”

She added: “He needs to combat racism in the Labour party as energetically as he has opposed antisemitism. Anything else suggests that he does not really care. It would also be good if, even five years later, I got any type of apology for the sustained racist abuse by paid Labour full-time officials.”

The first step to solving any problem is to acknowledge that a problem actually exists. But for Labour leader Keir Starmer, it’s preferable to ignore the issue entirely. After two years and more than 1,000 testimonies, the results of the Forde inquiry into the factious Labour Party landed on 19 July. The damning report highlights the “hierarchy of racism” within the party and exposes serious weaknesses in leadership – from failing to act on members’ concerns, imposing barriers to progression for people from ethnic minorities, and plain bullying. In response, Starmer did what he always does: nothing.

“The Forde report isn’t a historical record, as has been suggested,” says Kate Osamor, MP for Edmonton, London since 2015. “It’s an account of problems that currently exist within the party – there’s a hierarchy of racism that still exists.”

Writing for Open Democracy the Labour MP Kate Osamor said: The Labour leader must take responsibility for the racism identified in the Forde Report and take action to end it.

That isn’t good enough. The mainstream media may be content to pay relatively little attention to the issue of systemic racism raised in this report, but the leadership shouldn’t use that as an opportunity to do the same.

I feel degraded, overlooked and insulted… I am a prime example of why so many say Labour has a problem with raceOne submission to the Forde Report

It’s worth remembering what it is that the leadership is dismissing. Forde found problems of discrimination in the party. In particular, he cited concerns by party members over a perceived “hierarchy of racism” leading to “many other forms of racism and discrimination” being overlooked due to a focus on allegations of antisemitism.

Forde also stated that the discrimination faced by Black and ethnic minority members of our party was wide-ranging and systemic: from “acts of aggression and microaggression” to individuals, to “seeing colleagues passed over for promotion” and the disgusting racist abuse aimed by senior staff members towards Black MPs.

Forde received such a large response from individuals wanting to share their experiences of racism in the party that he felt he had to create an annex to give a representative example of those contributions. For anybody who cares to read them, those examples provide a troubling account of the party as it is today.

One contribution reads: “The way career progression is handled in the party places further barriers for Black staff. In my experience, it’s been a lot harder to progress compared to my White colleagues.”

Another states: “I write this submission to you feeling degraded, overlooked and insulted on so many levels. I am a prime example of why so many say the party has a problem with race. It is why you can count on one hand the number of senior Black women in the party, and on multiple hands the number of Black people that have left.”

These contributions are typical of the experiences that are being ignored by the Labour leadership.

The Gray Report has turned out to be just as elusive as the Forde Report: Both Johnson and Starmer are taking us for mugs