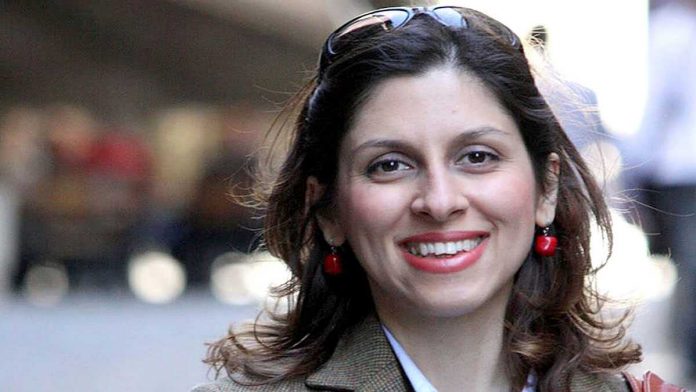 Nazanin Zaghari-Ratcliffe, the British-Iranian woman jailed in Iran on spying charges, has had her ankle tag removed at the end of her five year sentence.

But her husband Richard Ratcliffe has been told a new court case against her is scheduled for next Sunday.

The charity worker had been under house arrest in Tehran since being moved from jail last March. She has always denied the charges against her.

The second set of charges long threatened by the Iranians include involvement in propaganda activity against the Islamic Republic by attending a demonstration outside the Iran embassy in 2009 and speaking to BBC Persian.

Her lawyer Hojjat Kermani told the Iranian website Emtedad on Sunday that her five-year prison sentence for plotting to overthrow the clerical establishment was complete.

“She was pardoned by Iran’s supreme leader last year, but spent the last year of her term under house arrest with electronic shackles tied to her feet. Now they’re cast off,” Kermani told the website. “She has been freed.”

Iran’s judiciary officials have yet to comment on the release.

In practice, the news means she has been released from the ankle tag that keeps her within 300 metres of her parents’ home, but since she is facing a set of charges this Sunday she is unlikely to be given back her passport, which she would need to return to the UK.

The foreign secretary said she should be allowed to return to the UK.

Dominic Raab said in a statement: “We welcome the removal of Nazanin Zaghari-Ratcliffe’s ankle tag, but Iran continues to put her and her family through a cruel and an intolerable ordeal.

“She must be released permanently so she can return to her family in the UK. We will continue to do all we can to achieve this.

“We have relayed to the Iranian authorities in the strongest possible terms that her continued confinement is unacceptable.”

Tulip Siddiq, the Labour MP for the Hampstead and Kilburn constituency in London where Mrs Zaghari-Ratcliffe’s family live, told the BBC she had not yet had her British passport returned to her.

I have been in touch with Nazanin‘s family. Some news:

1) Thankfully her ankle tag has been removed. Her first trip will be to see her grandmother.

2) Less positive – she has been summoned once again to court next Sunday.#FreeNazanin

“But she does have to go back to court and we don’t know what awaits her there,” she said.

“Nazanin is quite worried because there was talk of another case being put against her which may of course mean another sentence, and we don’t know how long for.”

However Ms Siddiq said the removal of her ankle tag meant she could visit her elderly grandmother “which is the thing she mentions every time I speak to her”.

“So on one hand they are celebrating that she has some elements of freedom in terms of not having the tracker anymore, but we just don’t know what’s going to happen in the court case,” she added.

“I know her daughter has been counting down the days on her calendar at home for her mother to return.”

Jeremy Hunt, who served as foreign secretary while Mrs Zaghari-Ratcliffe was in jail, said it was “beyond cruel to toy with an innocent mother and six-year-old child in this way”.

“She has served five years: let her come home,” he said in a tweet.

Kate Allen, director at Amnesty International UK, said the news that Mrs Zaghari-Ratcliffe’s ankle tag had been removed was “bittersweet” and “yet another example of the calculated cruelty of the Iranian authorities”.

“Nazanin was convicted after a deeply unfair trial the first time around and this spurious new charge and possible trial is clearly designed to delay her release and exert yet more pressure on Nazanin and her family,” she said.

“This won’t be over until Nazanin has her passport and is on a flight heading home to the UK,” she added, urging the government to take “serious diplomatic action”.

Mrs Zaghari-Ratcliffe, 42, had been out of prison since last spring due to the coronavirus pandemic but had been confined to her parent’s house. Her sentence was due to end on Sunday.

She was arrested in April 2016 while travelling to visit her parents in Iran with her young British-born daughter, Gabriella.

The dual national was sentenced to five years in prison over allegations of plotting to overthrow the Iranian government, which she denies. Prior to her arrest, she lived in London with her husband and child.