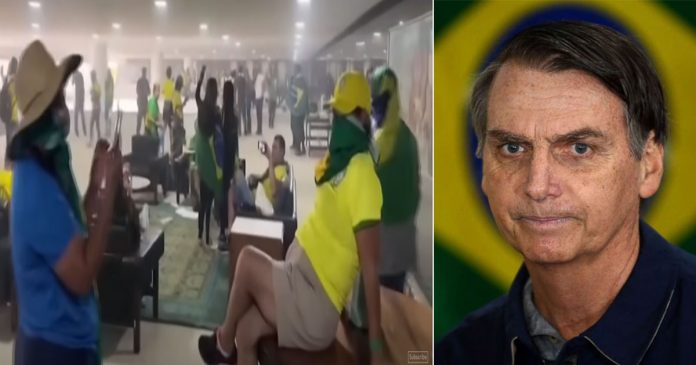 The fascist attack on Brazil’s main government complex was “directly aided” by major social media platforms such as Facebook, TikTok, and Telegram, the global watchdog group SumOfUs said Monday as the country’s authorities continued their cleanup efforts, investigation, and arrests of suspects involved in the anti-democratic assault.

The insurrection, carried out by supporters of far-right former President Jair Bolsonaro, “can come as no surprise to social media executives, who were warned time and again that their platforms, tools, and algorithms were directly aiding a violent uprising in Brazil,” said Flora Rebello Arduini, campaign director at SumOfUs, a nonprofit that has been monitoring the proliferation of election lies on social media in the South American country.

Referencing the January 6, 2021 assault on the U.S. Capitol, which was also abetted by social media giants, Arduini added that “we’ve now seen this happen in two of the world’s major democracies—if governments fail to respond, more will inevitably pay the price.”

In late October, on the eve of Brazil’s presidential runoff, SumOfUs released a report detailing how TikTok and Meta—the parent company of Facebook, Instagram, and WhatsApp—were putting the “integrity of the election on the line through their disastrous recommendation systems.”

“Far-right extremists, who are openly agitating for a military coup, are operating freely on Meta’s platforms, and Meta is not only allowing them to spread their message and recruit new members, but the platform’s algorithms are prioritizing anti-democratic groups, accounts, and posts,” the report found.

SumOfUs estimated that Facebook ads sowing doubt about the Brazilian election and agitating for a military coup accumulated at least 615,000 impressions.

Fears of far-right violence have been high in Brazil since Bolsonaro’s defeat at the hands of leftist President Luiz Inácio Lula da Silva. In the wake of Sunday’s attack—for which at least 1,500 people have been arrested thus far—Lula accused Bolsonaro of “encouraging this via social media.”

“We’ve now seen this happen in two of the world’s major democracies.”

Meta said Monday that it has deemed the attack on Brazil’s government buildings a “violating event” and has begun removing “content that supports or praises these actions.”

But critics say Meta and other major social media companies ignored or brushed off warnings that their platforms were being used as crucial organizing hubs for the insurrection.

The Washington Post reported Monday that “in the weeks leading up to Sunday’s violent attacks on Brazil’s Congress and other government buildings, the country’s social media channels surged with calls to attack gas stations, refineries, and other infrastructure, as well as for people to come to a ‘war cry party’ in the capital, according to Brazilian social media researchers.”

The newspaper added that “researchers in Brazil said Twitter, in particular, was a place to watch because it is heavily used by a circle of right-wing influencers—Bolsonaro allies who continue to promote election fraud narratives.”

“Billionaire Elon Musk, who completed his acquisition of Twitter in late October, fired the company’s entire staff in Brazil except for a few salespeople,” the Post reported. “Among those fired in early November included eight people, based in São Paulo, who moderated content on the platform to catch posts that broke its rules against incitement to violence and misinformation.”

In a statement on Monday, SumOfUs called for “a rigorous investigation into yesterday’s actions, including into the role of social media platforms in facilitating the attack on Brazilian democracy.”

The Political class have abandoned the workers: Our strength is in the unions