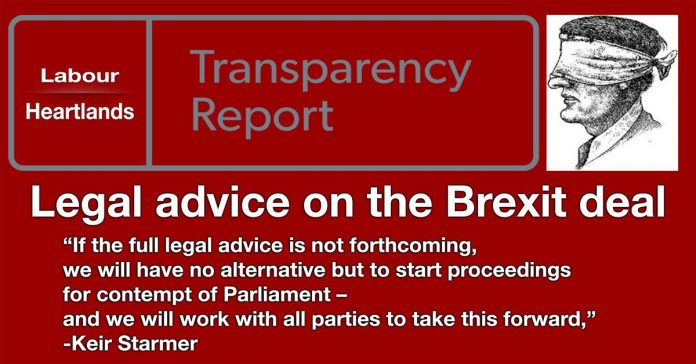 Four major U.K. political parties will band together to try to force Prime Minister Theresa May to publish the government’s legal advice on the Brexit deal, the Sunday Telegraph reported.

The move could delay the crucial vote on the Brexit deal in the House of Commons and further undermine support for the agreement, whose prospects in parliament already look bleak.

Northern Ireland’s Democratic Unionist Party (DUP), whose MPs prop up May’s minority Conservative government, will join Labour, the Liberal Democrats and the Scottish National Party (SNP) in sending a letter on Monday that will accuse the government of being in contempt of parliament over its refusal to release the full legal advice, according to the Sunday Telegraph.

The newspaper said it had seen a draft of the letter, which could delay the start of a 40-hour marathon debate over five days on the Brexit deal.

In an opinion piece in the Sunday Telegraph, Starmer wrote that ministers could trigger “a historic constitutional row that puts Parliament in direct conflict with the executive” if they do not release the full legal advice.

“If the full legal advice is not forthcoming, we will have no alternative but to start proceedings for contempt of Parliament – and we will work with all parties to take this forward,” he added.

U.K. Chancellor Philip Hammond said last week that the government would only publish a summary of the legal advice. The government has insisted that legal advisers must be able to provide advice in confidence, without fear that it will be published, so that they can provide a frank assessment.

Labour will call a confidence vote in Theresa May if she loses the crunch Commons vote over her Brexit deal, in a bid to trigger a general election.

Sir Keir Starmer, the shadow Brexit Secretary, said his party will “inevitably” table a no confidence motion if Mrs May’s Brexit deal does not pass through Parliament.

“People praise her resilience – at the moment I don’t think this is resilience, it’s just ploughing on regardless,” he said.

May’s Chequers deal was doomed from its very concept! Everyone and their dog realised this on it first announcement, that’s everyone but Theresa May!