Brussels is blind to diversity

‘The report will be launched in the European Parliament on Wednesday at an event hosted by the Italian politician Cecile Kyenge, one of only three black MEPs in the 751-strong assembly. The MEP has argued that the EU has a gap in its equality strategy and has drafted a non binding resolution to promote equality for an estimated 15 million people of African descent in the EU’ 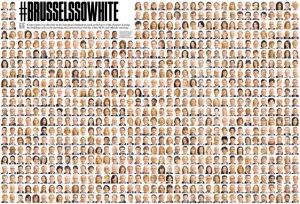 The lack of diversity within the EU parliament paints a very white picture.

For an institution that supports diversity, equal opportunity, and human rights, the European Union is surprisingly lax when it comes to implementing it in practice, particularly in terms of employing racial minorities.

Brussels is a very diverse city. Of its 1.1 million residents, around half were born outside of Belgium. However, the number of people from ethnic minorities working in the EU institutions is extremely low – fewer than 2% of those employed in high-level positions.

Of the 751 MEPs currently in office, fewer than 20 are people of colour.

“The EU, an international organisation of 28 member states which proudly proclaims it is ‘united in diversity’, is nothing of the sort,” says Syed Kamall, the co-chairman of the European Conservatives and Reformists (ECR) group, and a London MEP.

The ECR is one of the more diverse groups in the Parliament with five non-white MEPs out of a total of 72. All five are from the UK, widely seen as the most diverse country in the EU.

According to its Office of National Statistics, the last census in 2011 recorded that almost 12% of the UK population was from an ethnic minority background.

Much of the racial diversity that exists in the EU institutions is because of the UK.

Harassment, violent attacks and police profiling against black people in the EU is widespread, according to a report. A lot of discrimination and attacks go unreported.

Black people in the European Union continue to face a “pervasive scourge” of racism, including harassment, attacks and police profiling, according to an EU report published Wednesday.

“Almost 20 years after adoption of EU laws forbidding discrimination, people of African descent face widespread and entrenched prejudice and exclusion,” Michael O’Flaherty, director of the EU Agency for Fundamental Rights (FRA), said in the foreword to the report entitled “Being Black in the EU.”

One-quarter of all people surveyed were stopped by the police in the past five years. Among these, four in 10 characterised the most recent stop as racial profiling.

Not only is racial profiling illegal, but it also undermines trust in law enforcement, the report said.

“Overall, respondents rate their trust in the police at 6.3 on a scale from 0 to 10, where 0 means ‘no trust at all’ and 10 indicates ‘complete trust,'” the report said.

Is ‘racial profiling’ illegal? Depends on where you live

Racial profiling refers to procedures in which people are subjected to special checks by police or are detained on the basis of their ethnicity.

Germany does have an anti-discrimination law. The general law of equal treatment (AGG) states that all people should be treated equally and not be disadvantaged because of their race, gender, age, religion, sexual orientation or a disability.

“A particularly unsettling pattern is that younger individuals tend to experience more discrimination and exclusion than older individuals. This renders even more urgent the need for intensified efforts to promote the full inclusion of people of African descent in the EU,” O’Flaherty said.

Additionally, nearly 40% of respondents felt they had been discriminated against in the past five years because of their skin colour, ethnic origin or religion.

Finland had the highest rate of all 12 member states surveyed, with 63% of respondents reporting having been the target of offensive non-verbal cues, threatening comments or even threats of violence.

The Mediterranean island nation of Malta had the lowest prevalence (20%).

The UK remains one of the least racist countries in the European Union according to this latest EU survey of first and second generation African immigrants in Europe.

Additionally, nearly 40% of respondents felt they had been discriminated against in the past five years because of their skin colour, ethnic origin or religion.

This was particularly true in the labour market, where “people of African descent are often engaged in low quality employment that does not correspond to their level of education,” the report flagged.

Access to housing was equally problematic, with nearly half of the respondents living in overcrowded housing (45%), compared to 17% of the general population in the EU.

Despite the already damning evidence, the report noted that because a number of member states do not provide official information on racial or ethnic origin in administrative data, “the survey, therefore, cannot claim to capture the entire scale and complexity of the experiences of black people across Europe.”

“In the 21st century, there is no excuse for racial discrimination. Yet black people in the EU today are still victims of widespread and unacceptable levels of discrimination and harassment simply because of the colour of their skin,” O’Flaherty said

“We need to stamp this out once and for all. For this, member states need effective and targeted policies and laws to ensure black people are fully included in our society.”

The European Network Against Racism described the report as “an important step in documenting the prevalence of Afrophobia” in the EU.

Its chair Amel Yacef said in a statement.

“These findings document what we have been saying for a long time: racism experienced by Black people in European society is structural, and we are in need of structural solutions,”

Coronavirus: The Tory gamble that could see thousands more die.

George Floyd killing: Trump threatens to unleash the unlimited power of the Military as US cities brace for further unrest