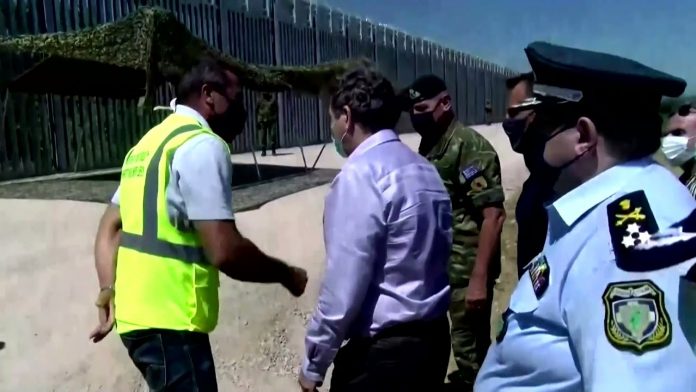 Greece said on Friday it had completed a 40-km fence on its border with Turkey and a new surveillance system was in place to stop possible asylum seekers from trying to reach Europe following the Taliban’s takeover of Afghanistan.

Events in Afghanistan have fuelled fears in the European Union of a repeat of the 2015 refugee crisis, when nearly a million people fleeing war and poverty in the Middle East and beyond crossed to Greece from Turkey before travelling north to wealthier states.

Greece was on the frontline of that crisis and has said its border forces are on alert to make sure it does not become Europe’s gateway again. read more

The Afghanistan crisis had created “possibilities for migrant flows,” Citizens’ Protection Minister Michalis Chrisochoidis said after visiting the region of Evros on Friday with the defence minister and the head of the armed forces.

The Afghanistan crisis had created “possibilities for migrant flows,” Citizens’ Protection Minister Michalis Chrisochoidis said after visiting the region of Evros on Friday with the defence minister and the head of the armed forces.

“We cannot wait, passively, for the possible impact,” Chrisochoidis told reporters. “Our borders will remain safe and inviolable.”

Chrisochoidis said the extension to the existing 12.5-kilometre fence had been completed in recent days, as well as a hi-tech, automated electronic monitoring system.

Migrant arrivals to Greece, either by land or by sea, have overall slowed to a trickle since 2016, when the EU agreed a deal with Turkey to stem the flows in exchange for financial support.

Greece has in the recent past stopped people from entering its waters, though it denies widely reported allegations of so-called “pushbacks.”

Fences are also springing throughout the EU. Lithuania is in the midst of building a 550-km border fence with Belarus who they accuse of allowing migrants to pass freely into the EU.

Laurynas Kasciunas, a Conservative MP and head of the influential parliamentary committee on national security and defence, is convinced the fence is a must to protect Lithuania from migrants – now and in future.

“The two-layer fence with various engineering solutions is what we need to protect our border against an unpredictable regime like that of the tyrannical ruler over the border. We intend to finance the whole fence project from the state coffers, but we will ask Brussels to help us with that too,” Kasciunas told euronews.com

According to Kasciunas, the completion of the fence will cost around €150 million.

“The challenges I see now are the pace (of the building) and transparency, especially when we are in crunch time.”

Lithuania has issued an international tender to purchase 3,000 kilometres of concertina wire and all other necessary parts and installation works, the Asset Management and Economy Department (AMED) under the interior ministry, has announced this week.

The plan is to spend up to €16.15 million on 3,000 kilometres of razor wire, which will be put up in several layers, and up to €12.5 million on installation works. Up to €23.23 million have been earmarked for buying other necessary parts, such as posts, tie wire and fixing devices, the AMED said.

A daunting barrier looms over Hungary’s southern border, capable of delivering electric shocks to unwanted migrants and armed with heat sensors, cameras, and loudspeakers that blare in several languages.

The country was a main crossing point for hundreds of thousands of people trekking into Europe at the height of the migrant crisis in 2015.

The UK, EU and US have waged wars in middle eastern countries for over two decades the only winners have been the arms companies and the politicians in their pockets.