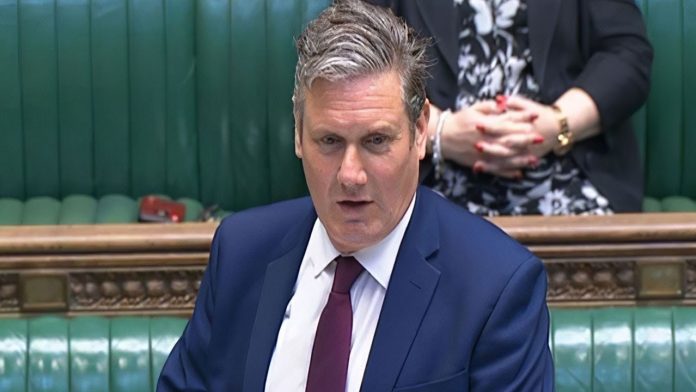 It means, as of Wednesday, that the prime minister, chancellor, health secretary and leader of the opposition are now in self-isolation as cases of coronavirus continue to rise.

Sir Keir Starmer is self-isolating after a member of his immediate family tested positive for Covid, his spokesperson has said.

Shortly after participating in the weekly session of prime minister’s questions, the Labour leader was informed one of his children had tested positive for Covid-19 around lunchtime.

It will be the fourth time Sir Keir has had to enter quarantine since the pandemic began.

Starmer was first forced into isolation in September after a family member showed symptoms.

He went back into quarantine in December after a staff member in his private office tested positive.

Starmer was left working from home again as he was pinged by the NHS app at the end of January.

It comes after the Labour used the final session of prime minister’s questions before recess on Wednesday to criticise Boris Johnson for an extraordinary U-turn at the weekend when he initially sought to sidestep Covid isolation rules.

On Sunday, No 10 was forced to backtrack on plans for both the prime minister and the chancellor, Rishi Sunak, to avoid quarantine by joining a daily testing scheme, which is supposed to select members of the public at random.

Faced with a considerable political backlash, Mr Johnson and the chancellor said just hours later they would not participate in the scheme, and are both now self-isolating.

Sir Keir Starmer accused the PM of being a “super spreader” of confusion over Covid rules.

Meanwhile, Richard Burgon, a Labour MP, asked if statutory sick pay of £96 a week was enough to help people self-isolate.

This morning I was notified that I must self isolate after coming into contact with someone who has tested positive for COVID-19.

I have no symptoms and will be working from home until next Monday.

Companies across England have been thrown into chaos, with more than half a million people pinged by the app in a single week.

Nearly one in four people have now deleted or switched off the app in a mass revolt against the ‘pingdemic’.

Ironicly raising the issue in the Commons, Starmer asked: “If somebody’s pinged by the NHS app, as millions will be over coming weeks, should they isolate yes or no?”

“But it’s good that the prime minister finally recused himself, even if it took a public outcry, for the communities secretary to be humiliated on live TV and a trip to a country estate. If somebody’s pinged by the NHS app, as millions will be over coming weeks, should they isolate yes or no?

Responding virtually from Chequers, Mr Johnson replied: “I think that everybody understands the inconvenience of being pinged, as he rightly says here I am, I wish I was with you in the Commons chamber today.

“I apologise to everybody in business up and down the land in all kinds of services, public sector or otherwise who are experiencing inconvenience.

“We will be switching, as the House knows, to a system based on contact testing rather than contact isolation, but until then I just must remind everybody that isolation is a vital tool of our defence against the disease.”

Starmer was expected to continue a summer tour in the Midlands on Thursday as part of conversations across the country with voters who abandoned the party at the last general election but in line with government rules he will now spend up to 10 days in quarantine.

Watch: Will PM apologise for alleged remarks made on over 80s?