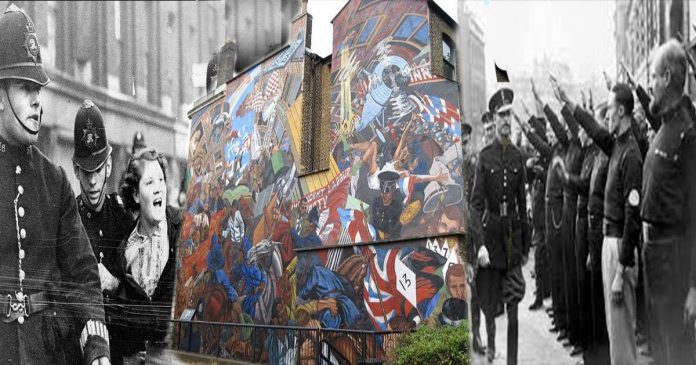 March with pride on 3rd October!

The Jewish Socialists’ Group takes its banner to many protests and marches but, for us, the commemoration of the Battle of Cable Street of October 1936, a pivotal moment in the fight against fascism in Britain, has a special meaning.

Fascism was advancing across Europe. Mussolini had already taken power in Italy, Hitler in Germany, and in many countries fascist movements were growing rapidly. In July 1936, Franco launched his devastating war on other Spanish people who dared to elect a progressive, democratic government, though one of Franco’s generals claimed: “Our war is not a Spanish Civil War but a war of western civilisation against the Jews of the entire world.”

Here in Britain, with nearly 3 million unemployed, hunger and hopelessness, and a loss of faith in conventional politics, a wannabe aristocratic politician, with financial backing from Mussolini in Italy and generous capitalists here, wanted to make a show of strength in East London where his movement – the British Union of Fascists – had its biggest branches. Those East End branches formed a horseshoe around the Jewish enclave, where 60,000 Jewish people, were trying to find enough work to eke out a living, mainly as tailors, shoemakers, cabinetmakers, market traders and shop assistants.

He chose the fourth anniversary of the founding of his movement to try to invade their streets with thousands of uniformed, jackbooted fascists, to abuse, threaten and intimidate them. Mosley sought support especially from the East End’s other large minority – Irish Catholics – but, on the day, the most unionised sectors of the Irish, dockers and railway workers united with the mass of Jewish East Enders and other non-Jewish anti-fascists to blockade the streets. In Cable Street they built barricades together. Seven thousand police could not clear a path for the fascists to march, as they had been ordered to by John Simon, the Liberal Home Secretary of a Tory-dominated National Government.

Earlier that week he had rejected a petition with nearly 100,000 signatures collected in just two days, calling for the march to be banned. It was drawn up by the Jewish People’s Council Against Fascism and Antisemitism (JPC) – a militant local grassroots coalition, formed with the aim of mobilising local Jews and uniting with non-Jewish anti-fascists to build an anti-fascist majority in the area. Within hours of the Home Secretary rejecting their call, the JPC was printing leaflets addressed to “Citizens of London” stating loud and clear: “This march must not take place!”

The formation of the JPC was also a direct response to the abject failure of the Jewish community’s self-proclaimed leaders – the Board of Deputies – to do anything to support the East End Jews under siege. They had told them they were exaggerating and arrogantly brushed aside the local Jewish community’s claims of police partiality towards the fascists.

We will not forget how the Board of Deputies and the Jewish Chronicle told Jews to stay indoors, claiming that any involvement in public demonstrations against Mosley would aid antisemites. It was their aloofness, their complacency, their lack of care towards London’s largest working class Jewish community that was aiding the antisemites.

Neither will we forget how the Board’s Vice-President and leader of the United Synagogue, Robert Waley Cohen, condemned antisemitism at a meeting of Jewish ex-serviceman in the summer of 1936 while telling them that Jews were prospering in Italy under Mussolini’s fascist regime, and that he himself was attracted to aspects of fascist ideology. Fortunately, the Jewish community completely ignored the wisdom and advice of their “leaders”.

The people, though, that the Jewish Socialists’ Group remembers most, and with immense pride and affection, are the parents and grandparents of many of our members who courageously took to the streets that day to defend the East End as a multicultural area where all communities would be able to live in harmony.

And we remember the unity in action of those who did most to mobilise the resistance that day, whether from the JPC, the Communist Party, the Independent Labour Party or the Labour League of Youth, and the local trade unions. We especially honour the 200 or so East Enders who continued their anti-fascist activities after Cable Street by joining the International Brigades fighting against Franco in Spain. Thirty-six of these local volunteers for liberty did not return; they lie buried in the Spanish soil.

While they were fighting in Spain, the movement here cemented the victory on the streets with a brilliant campaign to bring together the very communities that Mosley had tried to divide against each other – the Irish and the Jews. This joint campaign, under the auspices of the Stepney Tenants Defence League, saw more than 20 rent strikes against slum landlords. With both communities working closely together, it was much harder for the fascists to advance their politics of hate.

For us – as Jewish socialists, anti-racists and anti-fascists – this is a living history. Fascism was defeated then but returned to the East End streets in the 1970s through the National Front and the British Movement. Their antisemitism was intact but their principal targets were the Bengali communities that had settled in the same streets and worked in similar conditions in the clothing industry as the Jews had in the 1930s. New grassroots movements, led by Bengali youth, spearheaded the resistance to fascist intimidation and daily institutional racism, and they found allies in a similar way to the JPC in the 1930s.

We are proud that our rally this year, on Sunday 3rd October, will be co-chaired by a Jewish Socialists’ Group member and a Bengali activist – two communities brought together by a history of resistance to racism and fascism and we pledge ourselves to continue the fight against fascism and all racism and bigotry today.

This article was originally published by Jewish Socialist on Wed 29 Sep 2021. Read the original here.

The Day the East End said ‘No pasaran’ to Blackshirts