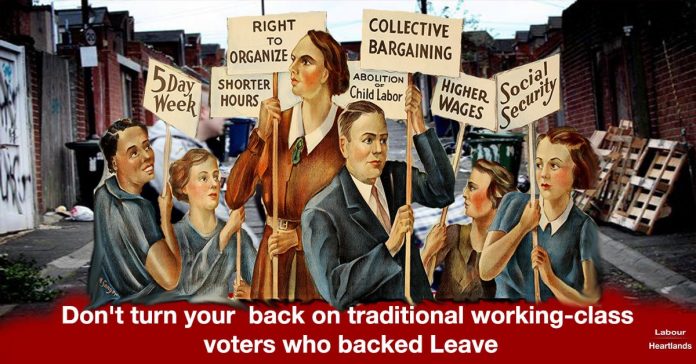 Don’t turn your back on traditional working-class voters who backed Leave.

Three years on with constant attack by both our own comrades within the Labour Party and the middle class centralist telling the working class leave voters that we did not know what we voted for, that we have changed our minds they even tell us we want a second referendum because the facts have changed “nobody voted to be poorer” they say.

Here is the fact we knew exactly what we voted for and have not changed our minds. While it is true we did not vote to be poorer it is also true the EU has done nothing to keep poverty from our door. a certain UN report can prove that. While the blame may lay with national government we await the EU comment on the subject after all don’t remainers tell us the EU protects us from Tory excess?

The Leave voting Labour Heartlands are the poorest areas within the UK and some areas even top the poorest areas in the entire EU. We voted to leave and we fully expect our democratic decision to be carried out.

John Pilger wrote the article below 2 years ago he captured the working class and their mood in voting to leave the EU.

The majority vote by Britons to leave the European Union was an act of raw democracy. Millions of ordinary people refused to be bullied, intimidated and dismissed with open contempt by their presumed betters in the major parties, the leaders of the business and banking oligarchy and the media.

This was, in great part, a vote by those angered and demoralised by the sheer arrogance of the apologists for the “remain” campaign and the dismemberment of a socially just civil life in Britain. The last bastion of the historic reforms of 1945, the National Health Service, has been so subverted by Tory and Labour-supported privateers it is fighting for its life.

A forewarning came when the Treasurer, George Osborne, the embodiment of both Britain’s ancient regime and the banking mafia in Europe, threatened to cut £30 billion from public services if people voted the wrong way; it was blackmail on a shocking scale.

Immigration was exploited in the campaign with consummate cynicism, not only by populist politicians from the lunar right, but by Labour politicians drawing on their own venerable tradition of promoting and nurturing racism, a symptom of corruption not at the bottom but at the top. The reason millions of refugees have fled the Middle East – irst Iraq, now Syria – are the invasions and imperial mayhem of Britain, the United States, France, the European Union and Nato. Before that, there was the wilful destruction of Yugoslavia. Before that, there was the theft of Palestine and the imposition of Israel.

The pith helmets may have long gone, but the blood has never dried. A nineteenth century contempt for countries and peoples, depending on their degree of colonial usefulness, remains a centrepiece of modern “globalisation”, with its perverse socialism for the rich and capitalism for the poor: its freedom for capital and denial of freedom to labour; its perfidious politicians and politicised civil servants.

All this has now come home to Europe, enriching the likes of Tony Blair and impoverishing and disempowering millions. On 23 June, the British said no more.

The most effective propagandists of the “European ideal” have not been the far right, but an insufferably patrician class for whom metropolitan London is the United Kingdom. Its leading members see themselves as liberal, enlightened, cultivated tribunes of the 21st century zeitgeist, even “cool”. What they really are is a bourgeoisie with insatiable consumerist tastes and ancient instincts of their own superiority. In their house paper, the Guardian, they have gloated, day after day, at those who would even consider the EU profoundly undemocratic, a source of social injustice and a virulent extremism known as “neoliberalism”.

The aim of this extremism is to install a permanent, capitalist theocracy that ensures a two-thirds society, with the majority divided and indebted, managed by a corporate class, and a permanent working poor. In Britain today, 63 percent of poor children grow up in families where one member is working. For them, the trap has closed. More than 600,000 residents of Britain’s second city, Greater Manchester, are, reports a study, “experiencing the effects of extreme poverty” and 1.6 million are slipping into penury.

Little of this social catastrophe is acknowledged in the bourgeois controlled media, notably the Oxbridge dominated BBC. During the referendum campaign, almost no insightful analysis was allowed to intrude upon the clichéd hysteria about “leaving Europe”, as if Britain was about to be towed in hostile currents somewhere north of Iceland.

On the morning after the vote, a BBC radio reporter welcomed politicians to his studio as old chums. “Well,” he said to “Lord” Peter Mandelson, the disgraced architect of Blairism, “why do these people want it so badly?” The “these people” are the majority of Britons.

The wealthy war criminal Tony Blair remains a hero of the Mandelson “European” class, though few will say so these days. The Guardian once described Blair as “mystical” and has been true to his “project” of rapacious war.  The day after the vote, the columnist Martin Kettle offered a Brechtian solution to the misuse of democracy by the masses. “Now surely we can agree referendums are bad for Britain”, said the headline over his full-page piece. The “we” was unexplained but understood – just as “these people” is understood. “The referendum has conferred less legitimacy on politics, not more,” wrote Kettle. ” … the verdict on referendums should be a ruthless one. Never again.”

The kind of ruthlessness Kettle longs for is found in Greece, a country now airbrushed. There, they had a referendum and the result was ignored.  Like the Labour Party in Britain, the leaders of the Syriza government in Athens are the products of an affluent, highly privileged, educated middle class, groomed in the fakery and political treachery of post-modernism. The Greek people courageously used the referendum to demand their government sought “better terms” with a venal status quo in Brussels that was crushing the life out of their country. They were betrayed, as the British would have been betrayed.

On Friday, the Labour Party leader, Jeremy Corbyn, was asked by the BBC if he would pay tribute to the departed Cameron, his comrade in the “remain” campaign. Corbyn fulsomely praised Cameron’s “dignity” and noted his backing for gay marriage and his apology to the Irish families of the dead of Bloody Sunday. He said nothing about Cameron’s divisiveness, his brutal austerity policies, his lies about “protecting” the Health Service. Neither did he remind people of the war mongering of the Cameron government: the dispatch of British special forces to Libya and British bomb aimers to Saudi Arabia and, above all, the beckoning of world war three.

In the week of the referendum vote, no British politician and, to my knowledge, no journalist referred to Vladimir Putin’s speech in St. Petersburg commemorating the seventy-fifth anniversary of Nazi Germany’s invasion of the Soviet Union on 22 June, 1941. The Soviet victory – at a cost of 27 million Soviet lives and the majority of all German forces – won the Second World War.

Putin likened the current frenzied build up of Nato troops and war material on Russia’s western borders to the Third Reich’s Operation Barbarossa. Nato’s exercises in Poland were the biggest since the Nazi invasion; Operation Anaconda had simulated an attack on Russia, presumably with nuclear weapons. On the eve of the referendum, the quisling secretary-general of Nato, Jens Stoltenberg, warned Britons they would be endangering “peace and security” if they voted to leave the EU. The millions who ignored him and Cameron, Osborne, Corbyn, Obama and the man who runs the Bank of England may, just may, have struck a blow for real peace and democracy in Europe.

A kick in the teeth: BBC to go ahead with over-75s TV licence fee changes