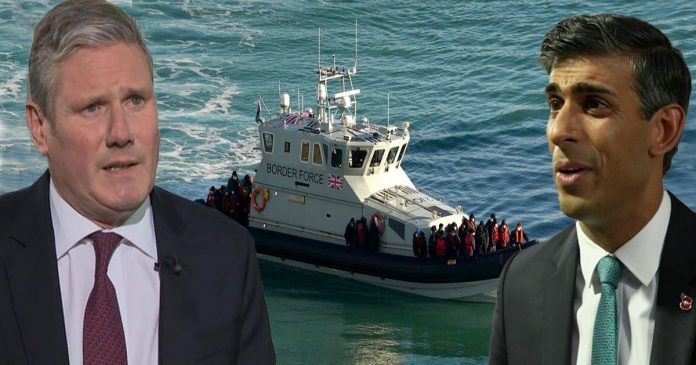 Rishi Sunak told the Commons on Tuesday that “enough is enough” and the system is “not fair”.

This week we have witnessed the tragedy of seeing four migrants crossing the channel die after their small boat capsized in the freezing cold water in the early hours of the morning making the dangerous crossing to Britain.

A further 43 people were understood to have been saved in a joint rescue effort by the UK coastguard, air ambulance service, the French Navy, the RNLI – and a fishing boat crew who pulled people to safety.

More than 44,700 people have made the Channel crossing reaching the UK in small boats this year.

More than a third of people who crossed the Channel to the UK in the first nine months of the year were from Albania, according to government figures.

Rishi Sunak announced the creation of a ‘small boats’ command centre, more raids, and plans to slash the £5.5m daily bill currently being spent on putting migrants up in hotels.

A dedicated unit of 400 specialists will be set up to handle claims from Albanians, and UK border officials will also be posted in Albania, under a new agreement with the country.

Mr Sunak told MPs: “It is not cruel or unkind to want to break the stranglehold of criminal gangs who trade in human misery and who exploit our system and laws. Enough is enough.

He added: “No one can doubt our generosity of spirit but today far too many of the beneficiaries of that generosity are not those directly fleeing war zones or at risk of persecution, but people crossing the Channel in small boats.

“Many originate from fundamentally safe countries, or travel through safe countries, their journeys are not ad hoc, but co-ordinated by ruthless organised criminals and every single journey risks the lives of women, children and we should be honest mostly men at sea.

“This is not what previous generations intended when they drafted our humanitarian laws.”

The five measure announced today are:

Outlining his plan to deal with Albanian migrants, Rishi Sunak said: “We have sought and received formal assurances from Albania confirming they will protect genuine victims and people at risk of re-trafficking, allowing us to detain and return people to Albania with confidence and in line with this E-Cat treaty.

“As a result of these changes the vast majority of claims from Albania can simply be declared clearly unfounded and those individuals can be swiftly returned.”

Mr Sunak said the PM of Albania said there was ‘no reason’ why illegal migrants from Albania can’t be returned immediately, and said the UK should follow other nations in Europe to reject asylum claims.

He also announced tougher thresholds for modern slavery, saying people will only be able to claim to be victims of if there is objective evidence, not just ‘suspicion’.

He says this, and other changes, should lead to “the vast majority” of claims from Albania being declared unfounded. People can then be returned quickly.

Mr Sunak there is a ‘complex moral dimension’ to illegal immigration, acknowledging the importance of helping those in need, but also said the UK needs to have control of its borders.

Former Tory PM Theresa May, said people smuggling and human trafficking are distinct and different crimes, and stressed they shoudn’t be treated as the same.

Ms May didn’t criticise the plans directly, but implied they would undermine the legal protection for victims of modern slavery, which she brought in during her time as Home Secretary.

The PM said he don’t do anything to weaken the support for victims of modern slavery.

In November Sir Keir Starmer accused the government of failing to deliver on pledges to reduce migrant Channel crossings.

The Labour leader said the UK had not secured “strong” agreements with France to prevent journeys from taking place.

Crossings have hit record levels in recent months, despite a July deal aimed at stemming the flow.

Channel crossings are a "serious problem requiring serious solutions" says Labour leader Sir Keir Starmer – adding that while the govt should've been offering solutions, instead what has been put forward is "unworkable gimmicks".https://t.co/WUnquWvHqf

Now the Labour leader Sir Keir Starmer said he welcomed additional staff, but added there had been a “total failure of any co-ordinated response” so far to criminal trafficking gangs.

“It’s appalling they let the backlog get this big,” he said.

“New staff we welcome, but can he guarantee that will result in prosecutions for those who put lives and national security at risk?” he added.

Starmer welcomed the fast-tracking of those who do not have claims to asylum, saying Labour had long been calling for the policy, and the addition of more staff to process claims.

But he attacked the “unworkable, unethical plan to deport people to Rwanda” and urged the government to “work internationally to end this cross-border crime”.

The World Economic Forum: Starmer will sell out the UK to Globalisation’s Mafiocracy

As Prime Minister, Rishi Sunak Won’t Change the Course for the Tories