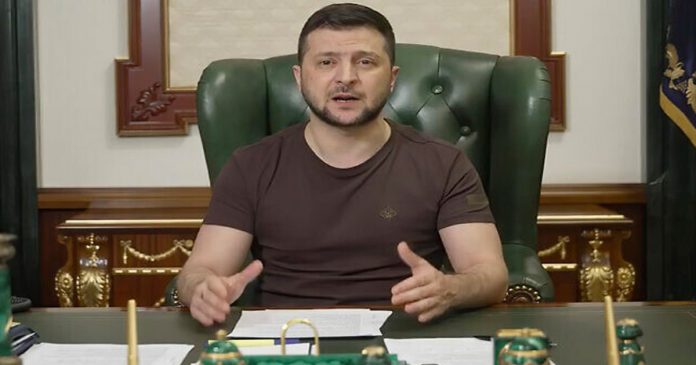 No place for the Left

Accusing the now-banned parties as being “pro-Russian”, it appears that Zelenskyy has distorted the truth, with some of those parties being anti-war.

The country’s national security and defence council took the decision to ban the parties from any political activity. Most of the parties affected were small, but one of them, the Opposition Platform for Life, has 44 seats in the 450-seat Ukrainian parliament.

“The activities of those politicians aimed at division or collusion will not succeed, but will receive a harsh response,” Zelensky said, in a video address on Sunday.

In bed with the Far-right

Ukraine has been under the influence of far-right Nationalists since the coup of 2014, until February 2022 Western media used airtime and media to condemn the build-up of far-right paramilitary groups in Ukraine. However, the western propaganda machine is undergoing an experiment in collective amnesia and pretending Ukraine does not have a Nazi problem.

The Opposition Platform for Life, Ukraine’s biggest opposition party, is led by Viktor Medvedchuk, a pro-Moscow oligarch with close ties to the Russian president, Vladimir Putin. Party officials later said the suspension “had no legal basis”.

The Ukrainian authorities last year charged Medvedchuk, a longtime ally of Putin who is believed to be the godfather of Medvedchuk’s daughter, with treason and placed the oligarch under house arrest, a move that angered the Kremlin.

Ukraine said Medvedchuk escaped house arrest three days after Russia started its invasion of Ukraine on 24 February and his whereabouts are currently unknown.

Of course where Viktor Medvedchuk, a pro-Moscow Zelensky is pro-Washington while Ukrainian people suffer in a proxy war pushed by two outside corrupt superpowers.

Ukraine has suffered under the influence of both East and West. In 2014 after saying NO to joining both the EU and NATO an action that brought about the Euromaidan protests when deadly clashes between protesters and the security forces in the Ukrainian capital Kyiv culminated in the ousting of elected President Viktor Yanukovych and the overthrow of the Ukrainian government.

The regime change brought in a Pro-Washington government and 8 years of civil war.

As always the people suffer while old men play their ‘cold war games’ getting rich on the slaughter of innocents while pretending it’s all in the name of democracy.

I have every sympathy for the people of Ukraine and they should be supported in every humanitarian way. They deserve better, they deserve their freedom and the right to self-determination without Russian and Western influence to such an extent that this influence has created this entire situation.

Tulsi Gabbard speaks openly about US involvement in Ukraine and the consequences Warmongers Tulsi Gabbard is the first female combat veteran to ever run for president and the first female combat veteran ever elected to Congress, along with Tammy Duckworth Tulsi Gabbard served in U.S. Congress for eight years on the Foreign Affairs, Armed Services, and Homeland Security Committees, where she dealt with highly sensitive national security issues. Tulsi is a war veteran with deployments to the Middle East and Africa, she presently serves as a Lieutenant Colonel in the U.S. Army Reserves working as a Civil Affairs officer.

Ukraine’s pro-Western president, Volodymyr Zelensky, signed a decree in February before any hostilities banning media outlets that had expressed opposition. The broadcasters had their licences revoked and are set to stay off the air for the next five years.

International and European Federation of Journalists (IFJ and EFJ) condemned what they called “an extra-judicial and politically motivated ban and a blatant attack on press freedom that must be urgently reversed”.

TV broadcasters ZIK, NewsOne and 112 Ukraine have been forced off the air for a period of five years following a decision by Zelensky that critics said stifles freedom of speech. The three broadcasters employ around 1,500 people, whose jobs are now at serious risk.

There was no official justification for the ban, but Ukraine’s president Volodymyr Zelensky said on Twitter that Ukraine supports freedom of speech but not “propaganda financed by the aggressors”.

The measures include the blocking of broadcasters’ assets, the prohibition of using radio frequencies in Ukraine and a ban on finance operations within the country, among others.

The three affected broadcasters were previously blamed by the Ukrainian government for being under “malign Russian influence” and threatening the information security of Ukraine.

In a statement, the National Union Of Journalists Of Ukraine (NUJU) said that “depriving Ukrainian citizens of access to media without a prior trial and banning hundreds of journalists and media outlets of their right to work is an attack on freedom of speech” and remarked that “the political affiliation of Ukrainian media owners registered in Ukraine is not a crime”.

The Independent Media Trade Union Of Ukraine (IMTUU) urged the government to develop a clear legal framework “for the division of propaganda resources and media” and claimed this politically motivated decision can pave the way to dictatorship and undermine democracy. “You can’t fight your most malicious and insidious enemy resorting to his methods”, the union said.

IFJ General Secretary, Anthony Bellanger, said: “This arbitrary and politically-motivated ban is unacceptable in a democracy. The ban puts at risk the job of hundreds of media workers that have nothing to do with their media owners’ political affiliations. The IFJ calls on the Ukrainian authorities to lift the ban and respect freedom of information and speech.”

EFJ General Secretary, Ricardo Gutiérrez, said: “Banning broadcasts is one of the most extreme forms of restricting media freedom. These bans should only be applied in very exceptional circumstances. States have a positive obligation to guarantee effective media pluralism. The manner in which the licensing process is applied must provide sufficient guarantees against arbitrariness, including the proper reasoning by the authority of its decisions denying a broadcasting license. It seems clear that the presidential ban is not at all in line with international legal standards on Freedom of Expression and the broadcasting media”.

Since 2015, the Communist Party of Ukraine (KPU) has been banned, with its members facing severe repression. 2015 also saw the banning of communist symbols.

The latest banning reflects a continuation of the Ukrainian government’s anti-socialist and anti-communist stance.