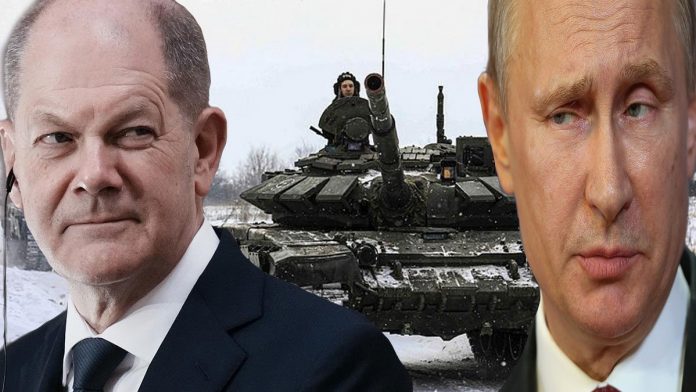 Moscow says some of its troops are pulling back

The Russian Defense Ministry has said some of its forces are set to return to permanent deployment sites, although “large scale” drills were continuing. Germany’s Olaf Scholz is in talks in Moscow.

Major General Igor Konashenkov, the defence ministry’s spokesperson, said on Tuesday morning that “as the military military training activities are over, as always, marches will be carried out in a combined way to permanent dislocation points”.

“The units of the Southern and Western military districts that have completed their tasks have already started loading railroad and motor vehicles and today they will start moving into their military garrisons,” he added in a video released on Facebook.

Statement of the official representative of the Ministry of Defense of the Russian Federation, Major General Igor Konashenkov on the return of connections and military parts to the permanent deployment points:

“In the Armed Forces of the Russian Federation, a complex of large-scale operations of the operational training of troops and forces continues. Almost all military districts, fleet and Air Force take part in them. Within the framework of the inspection of the response forces of the Union State on the territory of the Republic of Belarus, a joint Russian-Belarusian training “Union resolution 2022” is being held.

The Army of the Eastern Military District and the Air Force, participating in this exercise, in cooperation with the Belarusian armed forces, are working on issues of reflection of aggression against the Union State in the course of a defensive operation.

At the “Obuz-Lesnovsky” ground, February 19, a stage of combat firing was provided. During this event, the Marine Corps Brigade, together with the joints and military units of the Armed Forces of the Republic of Belarus, with the support of operational tactical and military aviation, will work on the tasks of conducting a defensive combat and making mannequins a ditch in other directions.

Military attire on defence issues at the embassies of foreign states in the Republic of Belarus and media representatives were invited to the draw of practical actions, as observers.

The units of the Southern and Western military districts that have completed their tasks have already started loading railroad and motor vehicles and today they will start moving into their military garlands. Individual units will perform marches with their moves in military colonies.”Official Representative of the Ministry of Defense of Russia, Major General Igor Konashenko.

This has been seen as the first sign of de-escalation from Moscow. But NATO’s chief said on Tuesday that the Western alliance had still not seen any signs of a reduced Russian military presence on the Ukrainian border.

Signs from Moscow that it is still willing to engage in dialogue “gives some reason for cautious optimism”, Secretary General Jens Stoltenberg told a news conference, adding that NATO would continue to follow closely what was happening on the ground, to see whether it amounted to a “real de-escalation”.

Before flying to Moscow Scholz stresses Ukraine ‘support but no weapons’ during the Kyiv visit, Scholz said Germany “stands close by” Ukraine’s side amid fears of a Russian attack. However, his visit came amid questions over the real extent of Germany’s support.

“Germany stands close by your side,” Scholz said at a press conference after the talks. “My country is impressed by the democratic movement in Ukraine and supports the European path it has taken since 2014.”

Scholz has held firm on Germany’s opposition to sending lethal weaponry to Ukraine amid a massive Russian troop buildup.

However, the chancellor pointed out that Germany has already given large amounts of financial aid to Ukraine, to help ward off what he called “foreign influences.” Scholz also announced a new loan of €150 million ($170 million) to Kyiv.

After which Olaf Scholz made his inaugural visit as German chancellor to Moscow on Tuesday to meet with Russian President Vladimir Putin, with the ongoing crisis at the Russian-Ukrainian border dominating the agenda.

Scholz arrived in Moscow after a trip to Kyiv on Monday, where he met with Ukrainian President Volodymyr Zelenskyy to strengthen Berlin’s support in the face of Russian aggression.

“The most important thing is that we manage relations between countries through good discussions with each other,” Scholz said as he met Putin, adding he was glad the two leaders were able to meet face to face.

He also praised the “very orderly business ties” between the two countries, while acknowledging the “difficult situation” for peace and security in Europe.

In his opening remarks, Putin also focused on economic ties, while noting “heated discussions” around Ukraine.

“Unfortunately, we will devote a significant portion of our time to issues related to the situation in Europe and to security,” said Putin, who was also aiming to discuss the issue of energy supply.

The eat or heat dilemma

More than 35 million EU citizens are unable to afford to keep their homes warm this winter. That’s the equivalent of the entire populations of Greece, Portugal, Hungary and Ireland combined having to decide between heating and putting food on the table.

The two root causes of fuel or energy poverty are low incomes and living in buildings with low energy efficiency.

Soaring fuel prices in Europe in recent months and the ongoing pandemic have exacerbated the problem, making it even harder for people to pay their bills.

The right to access essential services like energy is enshrined in The European Pillar of Social Rights – a guide towards stronger social rights in Europe.

The EU has outlined measures it suggests countries should put in place to keep fuel prices low, including emergency income support and tax reductions.

In France, the number of people using food banks such as Banques Alimentaires, partly funded by FEAD, the Fund for European Aid to the Most Deprived, has jumped by more than 30% since the start of the pandemic.

It’s a similar picture across Europe as people struggle to pay for food and rising energy bills.

In Bulgaria, more than a quarter of the population can’t afford to heat their home – that’s the highest level in Europe, followed by Lithuania and Cyprus.