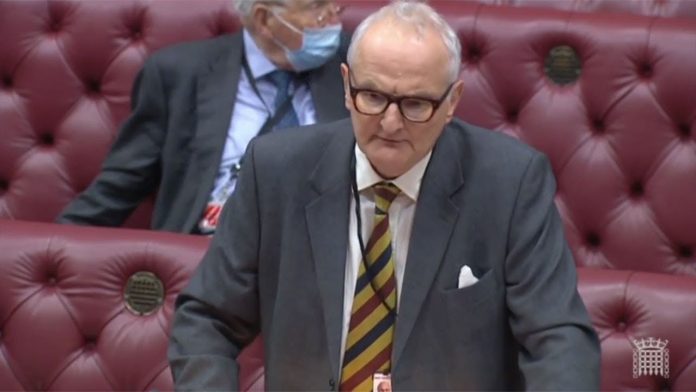 A Conservative minister in the House of Lords has resigned attacking the government’s handling of fraudulent Covid business loans.

Lord Agnew of Oulton accused the Treasury of having “no interest in the consequences of fraud to our society”.

He was updating peers about the £4.3 billion of Covid loans – written off by the Treasury – which Labour said has gone to “fraudsters”.

He added: “They have been ably assisted by the Treasury who appear to have no knowledge or interest in the consequences of fraud to our economy or society.”

The peer also said several “schoolboy errors” had been made – including the approval of more than 1,000 loans to companies “that were not even trading when Covid struck”.

Lord Agnew said he had been arguing with Treasury and BEIS officials with two years to raise their game – claiming a mixture of “arrogance, indolence and ignorance freezes the government machine”.

The departing minister encouraged fellow peers to carry on “scrutinising” the government on the loans. He was given a round of applause after saying “goodbye” and walked out of the chamber.

After telling the Lords he was unhappy with working between the Department for Business, Energy and Industrial Strategy (BEIS) and the Treasury, Lord Agnew said: “Given that I am the minister for counter-fraud, it would be somewhat dishonest to stay on in that role if I am incapable of doing it properly.”

He added: “It is for this reason that I have sadly decided to tender my resignation as a minister across the Treasury and Cabinet Office with immediate effect.”

Lord Agnew said his departure was “not an attack on the prime minister”.

Last week, a British judge demanded an explanation after a drug dealer and car thief with at least 48 convictions secured a £50,000 government loan under a Covid-19 business recovery programme.

Judge Anthony Cross said that it defied belief that Asif Hussain, 44, had secured the money for a “bogus” company less than seven days after successfully applying to the government’s Bounce Back Loan Scheme.

The judge said that it was the second time within a few months that he had sentenced criminals who had secured “huge” sums from the government scheme and he gave officials 14 days to respond in writing to explain how it had happened.

This comes after Billionaire Chancellor Rishi Sunak ‘WRITES OFF £4.3bn’ in public money given to companies and businesses in covid payments scheme now considered lost or stolen by fraudsters.

The Treasury has revealed that it expects its anti-fraud taskforce to write off £4.3bn ($5.9bn) in COVID-19 payments lost to fraud during the pandemic.

A total of £5.8bn is believed to have been unlawfully taken. The treasury said it will recover just £1 for every £4 stolen by scammers.

This includes money taken from emergency schemes such as the furlough programme, the Self Employment Income Support Scheme (SEISS), and eat out to help out, which was set up to help reopened restaurants in the summer of 2020.

The figures, which show that a maximum of only 26% will be recovered, were contained in documents quietly published on the HMRC website last week.

Some 8.7% of furlough payments were made either to fraudsters or by mistake as well as 8.5% of payments to its eat out to help out scheme, and 2.5% of cash handed to freelancers and entrepreneurs as part of its self-employed income support payments.

HMRC previously had a system in place to counteract fraud which worked through payment data, PAYE records, other information, and reports from the public to identify potential wrongdoing.

In November Jim Harra, chief executive at HMRC, said the department would struggle to recoup more than half of the money lost. At that point it had 23,000 investigations open into suspected fraudulent activity, and had in some instances begun criminal investigations.

Arrests secured by HMRC so far include the arrest of a West Midlands man on suspicion of £495,000 furlough fraud.

“HMRC could have either put in place a robust checking process that would have slowed the payment of these support payments to a trickle or allow a straightforward claim process and accept that fraudulent and incorrect claims would run into billions,” Tim Stovold, a partner at the accountancy firm Moore Kingston Smith, said.

“It will be very difficult for HMRC to recover these amounts now. Fraudsters have thoroughly covered their tracks.”

We on the other hand find that hard to believe. Read more…