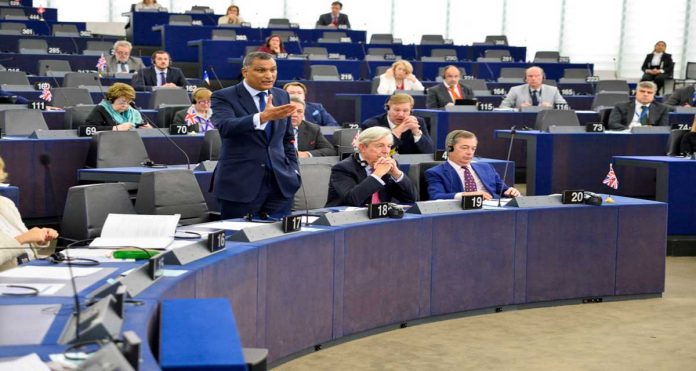 HERE is a famous often-used quote, “Those who cannot learn from history are doomed to repeat it.”

MEP Syed Kamall, the leader of the European Conservatives and Reformists (ECR), said Nazis subscribed to a “left-wing ideology” and “want the same things” as Socialists do.

His lack of history and education gives a whole new dimension to why we need better education and more so better politicians.

Members of European Parliament in Strasbourg reacted with rage after Kamall,response to an earlier speech by German MEP Udo Bullmann, the leader of the Progressive Alliance of Socialists and Democrats, during which he said that “right-wing nationalism and extremists” are “undermining the European Union.”

Kamall told Bullmann: “When you talk about right-wing extremists, we have to remember that Nazis were national socialists. It’s a strain of socialism.”

He then added: “It’s a left-wing ideology, they want the same things as you, let’s be quite clear.” When the chamber erupted in outrage, with some MEPs shouting out “rubbish,” Kamall said: “You don’t like the truth, do you?”

Bullmann condemned Kamall’s statement, telling the Tory that it was “an awful thing to say.

Kamall responded by saying he “gets tired” of people “saying that Nazism is a right-wing ideology,” before adding “If I have offended you, and I clearly have, I apologize unreservedly.” He later added on Twitter that his comments were not personal.

It really beggars belief that anybody could come out with such rubbish!

Only in a progressively Orwellian world would we ever imagine that a statement like this could fall from a politicians lip’s but then again it does seem that within the Tory ranks they like to offer this alternative history Tory Norman Tebbit says Nazis were LEFT-wing and Jo Cox’s killer wasn’t a ‘far right terrorist’ in bizarre Parliamentary statement.

As we will soon be approaching Armistice day maybe the conservative Party could spend a special day on reduction they could start with a few facts:

Approximately 11 million people were killed because of Nazi genocidal policy.

5 million of those murdered were non-Jewish.

Others were Nazi victims because of what they did, who they were, their genetic or cultural origins, or health conditions.

It was the explicit aim of Hitler’s regime to create a European world both dominated and populated by the Aryan race. The Nazi machinery was dedicated to eradicating millions of people it deemed undesirable.

Some people were undesirable by Nazi standards because of who they were, their genetic or cultural origins, or health conditions. These included Jews, Gypsies, Poles and other Slavs, and people with physical or mental disabilities.

Others were Nazi victims because of what they did. These victims of the Nazi regime included Jehovah’s Witnesses, homosexuals, the dissenting clergy, Communists, Socialists, ‘asocial’s, and other political enemies.

Those believed by Hitler and the Nazis to be enemies of the state were banished to camps. Inside the concentration camps, prisoners were forced to wear various coloured triangles, each colour denoting a different group.

8.7 million Russian Communist died fighting the Nazi tyranny in World War 2 not to mention how the British international Brigade fought the Fascist in Spain.

The working class Socialist of the International Brigades men and women who recognised the dangers of the rise of fascism in ’20s and ’30s and again we must learn and recognise the dangers today if it is left unchecked and unopposed then the dangers of its ugly head will rise again.

Communists, socialists and anarchists from all over the world went to Spain to defend not just the legitimate government but to defend democracy against a fascist dictator.

In Europe we have fascists marching in Germany, Poland, Ukraine, Italy, Austria, Sweden and Greece and neonazis are winning elections and some hold positions in government.

If we have politicians that don’t know their Left from their Right it is a scary prospect that the fight against the reemergence of the far right will again be on the shoulders of the working class.

They really do think they’re above us and the rules don’t apply: Illegal lockdown birthday party at Tory MP’s house