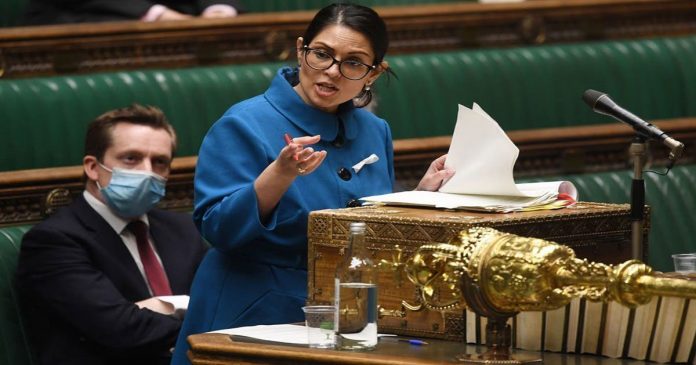 Tory ministers have been blasted for trying to pass “outrageous” new anti-protest laws at a late stage of a Bill.

Priti Patel’s Home Office was accused of a “naked attack on civil liberties” over measures proposed in a midnight Lords debate.

Courts would get powers to impose “prevention orders” on protesters’ future behaviour, even if they’re not convicted of a crime.

And the police would get sweeping new powers to stop and search protesters, even without suspicion a crime was committed.

Under the Police and Criminal Evidence Act 1984, police can use this power if they have “reasonable grounds for suspecting” someone is carrying certain items or something which could be used to violate certain laws, like burglary or theft. Patel is massively expanding the kinds of laws that might be included.

Now, police can deploy stop and search to avoid “serious disruption” or a “public nuisance”. They can be initiated “whether or not the constable has any grounds for suspecting that the person… is carrying a prohibited object”. It’s carte blanche for invasive police action against activists.

Those who refuse to give themselves up to this intrusion face the full force of the law. Anyone found guilty of obstructing a stop and search during a protest faces a jail term “not exceeding 51 weeks”. In other words, they risk imprisonment for nearly a year.

They would impose similar terms on activists who “wilfully” obstruct highways or the construction of major works like HS2.

Such offences could include chaining oneself to a gate, blocking a road or “intentionally or recklessly causing public nuisance”.

Home Office minister Baroness Williams said the offences were needed to stop the “reckless and selfish tactics” of groups like Insulate Britain.

Patel also appears to take direct aim at the Insulate Britain protests. Amendment 319C criminalises “wilful obstruction of a highway”. Amendment 319D criminalises the obstruction of “major transport works”, including roads, rail lines or airport runways. Amendment 319A creates an offence of “locking on”, or carrying equipment that might facilitate it. It targets anyone who attaches themselves to “a person, to an object or to land”. These all come with a potential 51 week prison sentence. In fact, this penalty is plastered all over the legislation.

Insulate Britain protestors supergluing themselves to a road are the clear target, but the powers go far beyond them. There is no definition of the term “attach”, so it could equally be applied to protestors who link arms during a sit-down protest, or even hold hands. It could apply to someone found with superglue while walking past a protest, or to the disabled activists who chained their wheelchairs to traffic lights over benefits cuts.

This is an assault on the core techniques of British protest throughout history: chaining yourself to public property and blocking roads. It’s what the Suffragettes did. It’s what anti-war demonstrators do. Only last month, activists managed to stop a deportation flight after blocking the road in front of a detention centre. Now all these tactics will be illegal.

But a leading human rights barrister branded the new powers “sinister” while Labour said they were “unacceptable”.

Ministers were criticised for attaching them to the Police, Crime, Sentencing and Courts Bill, which MPs have already approved.

The amendments were raised in the House of Lords, meaning they will get a vote by MPs if passed, but only in last-minute “ping-pong” rather than going into detailed scrutiny.

Baroness Williams withdrew the amendments from an early hours debate on Thursday in the face of peers’ fury.

But she warned she will re-table them in a new Lords debate in a few weeks.

She added: “We cannot have sections of our transport infrastructure or other critical infrastructure brought to a halt by a small group of protesters, whatever their cause.

“We accept some level of disruption is to be accepted and tolerated from protest action, but there is a line to be drawn.

“Insulate Britain, Extinction Rebellion and others have overstepped that line.”

She added: “This suite of new measures is necessary to protect the public from the unacceptable levels of disruption we have seen as a result of the reckless and selfish tactics employed by some protest organisations in recent weeks.”

But human rights barrister Adam Wagner said: “These amendments hugely increase the power of the police and public authorities to prevent protests, disrupt activities at protests and restrict the activities of protesters.

“As always with laws restricting freedom of speech, it is useful to imagine them being used to prevent the expression of views you care deeply about.

“These laws are so generalised they could seriously disrupt any protest movement, if the government or police want to.”

He said they will “very significantly limit the right to protest”, adding: “The government will say these are a response to Insulate Britain but in reality these are aimed at any large-scale disruptive protest.”

Labour peer Baroness Chakrabarti said it “tastes to me a lot like anti-terror legislation of the kind that I have always opposed as being disproportionate and counterproductive.”

Green Party peer Baroness Jones said: “This is nothing more than a naked attack against civil liberties and a crackdown on protest and we must oppose it for both what it is and how it’s been done.”

Shadow attorney general Lord Falconer accused the government of “excluding debate” by introducing 18 pages of new law at a late stage of the Bill.

Labour frontbencher Lord Kennedy condemned Insulate Britain tactics but added: “This is no way to do business.”

He added: “Although we are responding to one particularly crass protest, the law being debated would not just apply to that one crass protest but all peaceful protests.”

Pressing the Government to “temper” the measures, he said: “I think at the moment they are totally unacceptable”.

COVID-19: Thousands across Europe take to streets to protest government measures and their attack on our liberties