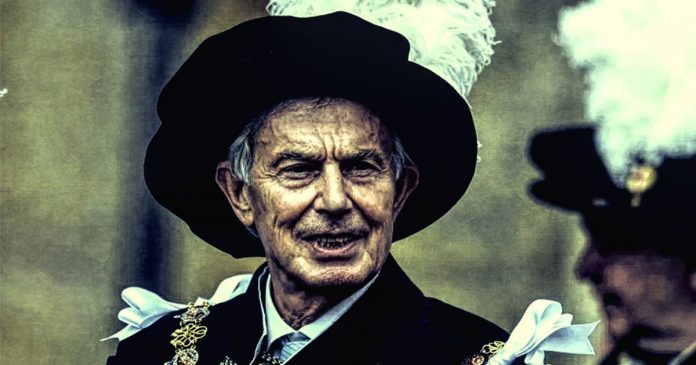 In December, when the announcement was made that Blair was to be honoured, more than 1.5 million signatures were gathered on a petition calling for the knighthood to be “rescinded”.

The petition said Blair was the “least deserving person of any public honour” and that he should be “held accountable for war crimes”.

That petition didn’t deter the establishment and its oligarchy which regardless of public opinion not only made Tony Blair a Knight of the realm but gave him the highest of ranks.

It is this sort of corruption that like cancer eats away all that is good in our society. The people’s faith in democracy, its politicians and institutions are diminished in the face of such honours given to the most loathed of its creatures, Blair, the leader that brought about decades of death, destruction, chaos and despair while turning the entire middle east into another forever war.

Blair for many is a politician of the lowest form who now pimps out his soul to the highest bidder for advice on how to fool the masses, he now spends his time enriching himself and his ego. The accolades elevating his status to Knight Companion of the ‘Most Noble Order of the Garter’ the highest possible ranking is built on the dried bones of a million dead.

The ceremony was full of pomp and tradition but only yards from the self-congratulations of the establishment elite, the common people protested at Blair’s ascension to the realms of knighthood.

That knighthood has sparked a significant backlash from anti-war groups. Coming 15 years after Blair left Downing Street and 19 years since he led Britain into the Iraq war.

Stop the War Vice Chair, Chris Nineham, said: “The rehabilitation of Tony Blair since the Iraq war is a scandal. He is widely recognised as a war criminal.

“Our protest will be representing the millions of people who believe the only court Tony Blair should be going near is the Hague.”

For many, this honour was an affront to the people who in 2003 had turned out in their millions to protest a war that Blair took us into. A war built on lies, a war the Chilcot enquiry painstakingly pointed out prime minister Tony Blair led us into overstating the threat posed by Saddam Hussein, using a sexed-up dossier, a report of fabled Weapons of mass destruction. Blair, who had sent ill-prepared troops into battle and had “wholly inadequate” plans for the aftermath. a war that resulted in up to 1,033,000 excess deaths, Blair, a man who while being so eager to climb the world stage acting as an American poodle rushed the UK into war at any cost.

Families of those killed in Iraq have also condemned the move to honour Blair, with the dad of Corporal Simon Miller branding it a ‘kick in the stomach’ and the ‘cruellest, sickest thing I ever heard’.

John Miller, 70, told Metro ‘For me and my wife, to see the headlines on New Year’s morning announcing a knighthood for Tony Blair came as a complete kick in the stomach.

‘It’s hard to describe the pain this news has caused us. We have been fighting for justice for our son Simon since the day he was murdered in Iraq, on June 24, 2003. Our lives have been consumed by it.

As we see Sir Anthony Charles Lynton Blair KG find his place there is no doubt, it’s us and them, it always has been.