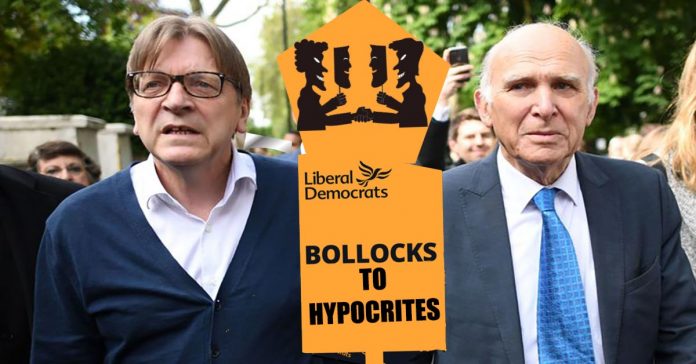 In a Tweet his condemnation of Istanbul’s election being cancelled reveals a “double standard” on Brexit in Brussels.

Verhofstadt, the Liberal ALDE group’s leader in the European Parliament, said the decision to annul Istanbul’s municipal vote, after an opposition candidate was elected mayor, has pushed the country closer to dictatorship.

Verhofstadt is one of ALDE’s top candidates in the European election. he claims:

“Under such leadership, accession talks are impossible. Full support to the Turkish people protesting for their democratic rights and for a free and open Turkey!”

The tweet came shortly after Turkey announced a second vote on the Istanbul election.

Turkey’s Supreme Electoral Board announced this week that the Istanbul election would be re-run on June 23, state media reported, after Erdoğan and his ruling Justice and Development Party repeatedly called for the March election to be cancelled, alleging widespread “irregularities.”

Supporters of a second Brexit referendum argue British voters should have a say on the final deal between the U.K. and Brussels,alleging widespread “irregularities.” in the original referendum.

‘Holding a second vote in Turkey is dictatorship.

But holding a second vote in the UK is democracy?’

Verhofstadt in good company with the Lib Dems and their double standards to democracy.

In Sep 2016 Cable told a fringe meeting in Brighton: “I don’t think we can say that. We should never have had the referendum in the first place, but the public have voted, and I do think it’s seriously disrespectful and politically utterly counterproductive to say ‘sorry guys, you got it wrong, let’s try again’.

He said that by rejecting even a “soft Brexit” that preserved the best aspects of the “European ideal”, the Lib Dems would be lining up with Ukip. “We should be very careful about the company we keep,” he said.

The then Party leader Mr Farron said: ““The Liberal Democrats are now the only party who will give the public a vote on the final deal and who will campaign to remain in the EU.”

“What happens if you win? Is that binding? Do you have to do a third?

“Which side would we be on if there was a soft Brexit? Would we support Theresa May or would we be with Nigel Farage voting it down?”

He added: “I don’t think it should be the issue we’re leading on.

“I’m not criticising [Mr Farron], I would just like to see more emphasis on what it is we want from these negotiations rather than arguing about the tactics and the means.

“We must accept the public have voted on the matter. We have to negotiate and we have to set out what are the things we should make some concessions on, and freedom of movement is one, and what are things we’re fighting for.”

Former Lib Dem leader Paddy Ashdown also seemed to put himself at odds with Mr Farron by saying the verdict of the British people must be respected.

Verhofstadt In London this week in support of the Lib Dems

The European Parliament’s Brexit coordinator endorsed the Lib Dems ahead of EU elections later this month, saying they offered an “alternative to nationalism”.

Speaking alongside Vince Cable in Camden, north London, he said:

“The reason I’m here to support the Liberal Democrats is there is only one pro-European party in Britain and it is the Lib Dems.

“That’s not new – it has always been the case in their history.”

He added: “I think it’s important to show that the European liberals and democrats support Vince Cable, support the Lib Dems in this difficult fight in Britain, in these European elections.

“Secondly, we want to show by coming here a message to the continent to say never repeat Brexit again.

“I’m a Lib Dem. It’s natural that people are looking to the Lib Dems when it comes to European elections.

“You sir are also a hypocrite”