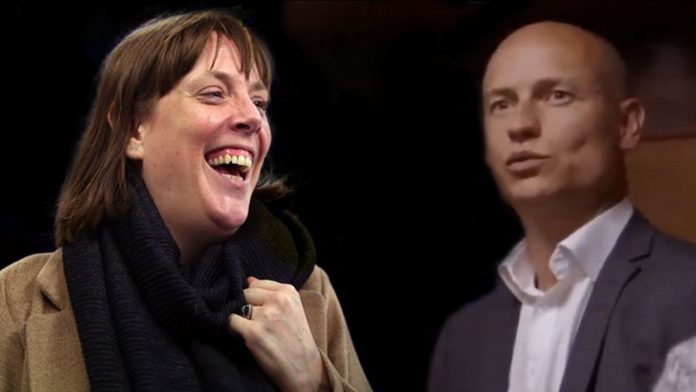 The Labour MP and Corbyn sceptic Jess Phillips appeared on Channel 4 to talk about how devastated she was following the news of exit polls showing her Labour’s crushing defeat in the 2019 general election, except the cameras switched on before she was prepared and caught her in the middle of a joyful chuckle.

It took several seconds and the overt reminders from the show’s hosts to put on a “straight face” and act suitable emotional before she could conceal her cheery mood as Corbyn’s Labour leadership was trampled underfoot.

“Good evening Jess,” said the program’s host Krishnan Guru-Murthy. “How are you feeling as these results unfold?”

Phillips, still unaware that the cameras were now rolling, did not interrupt the delighted guffaw she’d been enjoying.

“Can you hear me Jess Phillips?” the host asked over nervous tittering from the audience. “It’s Krishnan.”

“I can hear you, sorry,” Phillips said after a moment, literally putting her hand over her mouth for a few seconds to hide her giant grin.

“Straight face,” said Guru-Murthy, who then apparently realized that this was a bizarre thing to say and added “Actually you don’t have to have a straight face, umm, on this show. Umm… what are you thinking?”

“Oh are you talking to me now? Sorry that wasn’t clear,” said Phillips after a pause, her face now finally somewhat straightened out. “Sorry, I’m really tired. What I’m thinking is… it’s, it’s just totally devastating isn’t it? It’s totally devastating that all the people that I see every day, they’re gonna have nowhere to turn. I mean, I should probably do that thing where we all pretend that we’re gonna wait and see if the results are better than we thought, but it feels like a kick in the stomach.”

Jess Phillips didn’t look to devastated, the fact she had briefed against Corbyn and the Left for 4 years was expressed in her initial responses before realising she was on film. It would be wonderful to catch her reactions to these exit polls.

A BBC documentary that aired on 20 November gave Jeremy Corbyn’s supporters plenty to smile about. Labour – The Summer That Changed Everything followed a handful of MPs from the right of the Labour Party during the 2017 general election, documenting their hand-wringing about Corbyn’s leadership and their subsequent shock at the election results, which saw Theresa May lose her parliamentary majority.

But one 20-second clip – in which Stephen Kinnock MP and his father, former Labour Party leader Neil, tried to make sense of those results – stands out as comedy gold.

Labour MPs Stephen Kinnock, Lucy Powell and Ruth Cadbury all called for Corbyn to resign during 2016. And they all agreed to appear in a BBC documentary in the run-up to the 2017 general election. Their thoughts on Corbyn’s prospects in that election were pretty clear. This was Kinnock, speaking [05:00] to the BBC in May:

It looks at the moment like the 8th of June is not going to be a good night for us.

He pre-emptively tried to lay the blame [05:08] for the ‘inevitable’ Conservative landslide at Corbyn’s door:

“If a party fails after seven years in opposition to make good forward progress at an election, then the leader has to take responsibility for that. And, you know, on the 9th of June Jeremy is going to have to take a long look in the mirror and decide.

Labour MPs Lucy Powell, Ruth Cadbury and Stephen Kinnock, who had been calling for Mr Corbyn to resign, as they’ll be seen on BBC2 Mon 9pm pic.twitter.com/yiYuHo3fvq

Fast forward to election night on 8 June 2017 Few who saw the documentary will be able to forget the reactions of the three MPs as they watched the exit polling:

We all wonder if the exit poll’s are as bad as we predict tonight will there be a call for Sir Keir Starmer to go, will the Labour Party stop trying to be a Tory alternative and tack Left?

Will someone please capture the expressions on Jess Philips and Stephen Kinnock faces when they realise they should have been a little more careful in what they wished for, now it has become a reality without the Left Labour are finished.

Will the real Keith Starmer please stand up: Nato hypocrisy