In the midst of splits and political meltdown, a way forward for Labour

The resignation of eight Labour MPs and three Tories from their parties in order to form a reactionary “Independent” Group in the House of Commons is a clear indication that the present Parliamentary system is in the midst of a nervous breakdown.

Holding the fractured system together looks like mission impossible. A strategy to renew and extend democracy is essential, especially for the Labour Party if it is to succeed in ousting the Tories and coming to power. 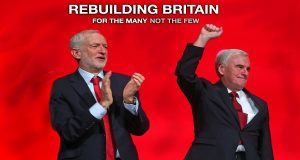 At the heart of the matter are two major issues: the prospect of a Jeremy Corbyn-led government and the inability of Westminster to deliver Brexit. Driving the process, is a profound crisis of neoliberal capitalism in terms of democracy, ecology, equality and a sense of place in a corporatised world.

Driven by their open hostility to a Jeremy Corbyn-led government, Chuka Umunna and company quit Labour precisely to try and prevent that from happening. They will never vote for a motion that could lead to the fall of the May government and a general election. Keeping Corbyn out is their top priority.

Umunna’s group are totally opposed to Labour’s radical programme to try and roll back the impact of market-led, neoliberal economic policies that have led to vast inequality in the UK. One of their number, Chris Leslie, a former shadow chancellor, made their priorities clear:

“They [Labour’s economic policies] are hostile to business large and small,” he said in his resignation speech. “They make impossible promises that everyone knows, in their hearts, couldn’t be kept without putting the economy at risk. And they constantly pit one part of society against another.”

The Independent Group’s statement underlines “the sound stewardship of taxpayers’ money” as one of its core values. Sounds much like Tory philosophy, which is why three Tories felt able to join the ex-Labour gang on the opposition benches.

Ignore the crocodile tears at the Gang of Seven’s departure press conference about how sad it was to leave the party. They are actually prepared to wreck the Labour Party if they can.

Chuka Umunna and company are part of a political coup process that began inside the Parliamentary Labour Party (PLP) as soon as Corbyn was elected in the wake of Labour’s disastrous general election campaign of 2015. Corbyn’s successful re-election a year later did nothing to hold back the plotters. Senior figures then resigned from the shadow cabinet in a failed bid to isolate Corbyn. A split then became inevitable.

The fact is that the PLP is dominated by an old guard that is largely wedded to the politics of the past period under Tony Blair, Gordon Brown and then Ed Miliband. These are founded on market-led solutions, pro-business policies, support for Nato and nuclear weapons and hostility to working-class voters.

Corbyn’s political “crime” has been to challenge this neoliberal orthodoxy and even accept that millions of poorly-paid workers voted for Brexit in the 2016 referendum. His other shocking action was to inspire 500,000 people to join Labour, making it the largest political party in Europe.

While it is undoubtedly true that some who joined are prone to crude anti-Semitic conspiracy theories, the vast majority simply want to oust the Tories and have no truck with such reactionary, racist nonsense. The real problem for the anti-Corbyn group in the PLP is that their constituency parties have started organising to remove them as MPs.

Clearly, a significant factor in the break-up of parliamentary politics is Brexit. The Commons is unable to deliver a Brexit that is in line with the aspirations of the 17.4 million who voted for it, namely improved standards of living and a greater say in the political affairs of the UK.

The result itself was, in many ways, the outcome of a long period of decline in wages, employment conditions and public services. This is the product of a 40-year period of neoliberal policies combined with the austerity that followed the 2008 crash.

At the same time, neoliberal capitalism has for decades been undermining the heart of the system of representative democracy established as a result of achievements the 19th century and early 20th century. In the neoliberal state – which the European Union is part of – governments are mere proxies for global corporate and financial power, while Parliament is essentially a toothless onlooker.

Throughout the world, existing political systems have broken down under these strains. In Europe alone, France, Italy, Hungary, Poland, Spain among others have been thrown into deep crisis. Some have gone straight to autocracy and rule by decree.

So it shouldn’t be a surprise that the UK’s political system is also falling apart at the seams. In their recent report, Hope Not Hate charts the growing anti-politics mood of the nation. “Our most recent polling, from February 2019, shows a massive 55% of people think that our political system is broken. A huge three quarters of people (75%) think that politicians put the interests of big business before people like them.”

The Tories are deeply split, with up to a 100 MPs favouring a kamikaze-style, no-deal Brexit. There are probably another 40 or so Labour MPs who could jump ship to block Corbyn. Enough MPs may combine to thwart Brexit altogether, which will add fuel to the constitutional fire well alight at Westminster.

Where does all this leave Labour under the leadership of Jeremy Corbyn and John McDonnell? The Labour Party is organised along the lines established in the aftermath of World War One. There is an amorphous mass membership while Momentum’s leadership is semi-detached from the leadership.

Then there are local councillors, who are predominantly right-wing and have implemented austerity with relish while building expenses-paid careers out of other people’s misery. Finally, there is the PLP itself which for the most part is at odds with the leadership of Corbyn and John McDonnell.

Some might say it’s amazing that this myriad of interests and groups has held together for as long as it has. Now that a split is under way, which seems certain to grow, the time is ripe for a remaking of Labour as a modern, less bureaucratic, less hierarchical, political movement.

That obviously is a major task but one that is necessary because, most likely, the days of formal representative democracy and routine general elections are a thing of the past in the UK. Labour has to become, therefore, an organised movement that is prepared to challenge existing power structures and empower people in a meaningful way in their communities and workplaces.

As it is impossible to see how the Tories can be removed through a vote of confidence in Parliament, it falls on the Labour leadership to campaign with their allies in the trade unions to bring the government down through popular pressure.

Combine this with an appeal to involve people in a process of relaunching democracy and a progressive path to political power will open up. That would be the best riposte to Umunna and company.

The Real Democracy Movement could use your support head over to their website to see where you fit in. LINK: