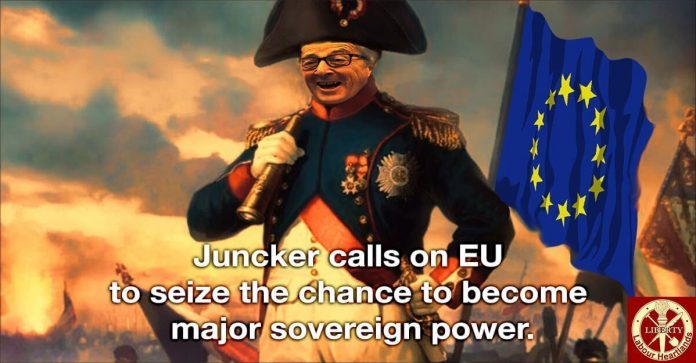 “The European Union must turn into a major sovereign power on the global stage making the world in its image,” Jean-Claude Juncker has said, setting out plans to make Europe militarily and economically independent from its traditional ally the US. In his state of the union speech, titled ‘The Hour of European Sovereignty’, the European commission president appealed to MEPs and heads of government to give the EU the powers and characteristics traditionally restricted to states.

If that is so here a few questions for the EU from a Left perspective.

Does that mean the EU will have equal pay across the EU? Will it have a statewide minimum wage. Will each member state have the same Tax levels? What about pensions and workers rights would they become universal across the EU superstate? At what level that of the highest states or that of the poor UK pension rates? Would we all have to use the Euro? Wait, wait…Of course, I’m talking nonsense that’s not the kind of sovereign power the EU want.

The EU wants sovereign power as an organisation that can set its own agenda. That dictates its authority on its member states whose veto will be removed. It wants to create a Superpower of Brussels! A bureaucratic centre for global business, one that sets trade deals that ignore and bypass its member states needs or concerns. Member states who would then have to give up the veto the only protection they have.

This would leave the EU to negotiates on behalf of big business at the expense of the people workers and workers rights. Juncker proposes fast-tracking EU trade deals in 2017: European Commission President Jean-Claude Juncker aims to solve one of the greatest weaknesses of EU trade policy by proposing fast-track ratification of trade deals that would eliminate the need for approval by some 40 parliaments across Europe.

Running the gauntlet of national and regional assemblies almost proved fatal to Brussels’ attempts to conclude a trade agreement with Canada last year, when the parliament of the French-speaking Belgian region of Wallonia came within a whisker of torpedoing the whole agreement. CETA the trade deal that over million European socialist tried to stop.
Read more on CETA . Link:

Some of the highlights of the speech:

Sounds just a little bit like a Nuremberg rally but hey! “Strength through unity!”

Have we been here before surely we would see it coming again? After all, it usually waves a flag goose steps while stating that peace can only be maintained through power and militarisation.

Read more from Herr Juncker in his State of the Union speech entitled:

THE HOUR OF EUROPEAN SOVEREIGNTY. Link:

TONY BENN OPINION ON THE DIRECTION OF THE EU IS RAPIDLY BECOMING A REALITY.

Let the country decide: Rumours are circulating stating – If this is to be ‘Boris Johnson’s Waterloo’ he will remove the whip from disloyal...